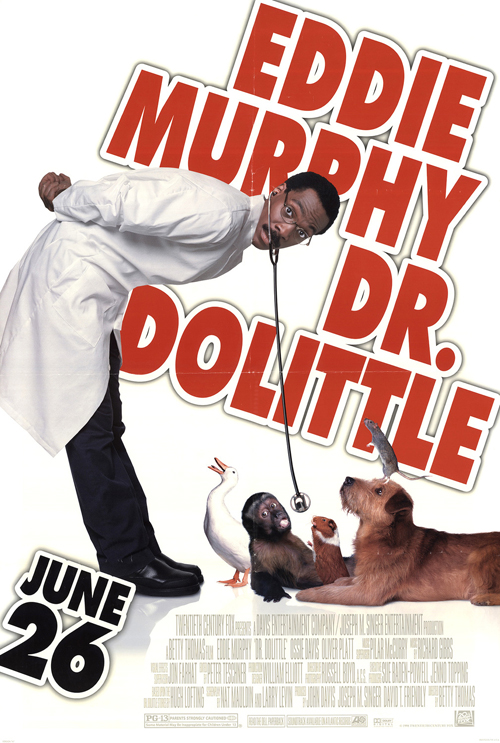 (SPOILERS) By several miles the least ambitious Doctor Dolittle adaptation, but possibly for that reason, probably the most agreeable. No one here is trying very hard – although the Jim Henson Creature Workshop creations are mostly pretty good – from the screenplay credited to Nat Maudlin and Larry Levin to director Betty Thomas (who managed a couple of decent, sharpish comedies prior to this, The Brady Bunch Movie and Private Parts), to star Eddie Murphy, sinking into the family comedy morass that would preoccupy him for the best part of twenty years.

But if this Doctor Dolittle is almost proudly underachieving – its indebted to repeated bursts of animal potty humour, but can you really blame it? – it knows exactly what it wants and how to deliver the same. The set-up is wound like clockwork, in the process offering a Dolittle origins story; as a child, reproved for his flights of “imagination”, he buries his innate skills and dreams, only for them to resurface at a later (much later) age when he has become a respectable and unsuspecting surgeon. And rather uptight father. A part made for Jim Carrey.

To give Murphy his due, he’s pretty good as the buttoned-down dad. There’s no way this has him operating at maximum strength – casting him as the straight man couldn’t – but that he plays his role serviceably and stillcomes off with charisma to spare evidences in no small part his star power. Inevitably, though, while he stole the show as a talking animal in his previous movie (Mulan), it’s his co-stars who hog the limelight and laughs here.

Leading the way is Chris Rock as guinea pig Rodney. It might, dare I say it, be Rock’s best screen role (no shame there, especially as Donkey is undoubtedly in Murphy’s top three). Albert Brooks is a close second as a suicidal circus tiger, who manages to be exactly like every character Brooks has ever played (I mean that as a compliment). The likes of John Leguizamo, Garry Shandling, Ellen DeGeneres and Jenna Elfman also lend their larynxes.

As per the original, Dolittle faces doubts over his sanity, here necessitating a stay in a sanatorium (where, naturally, Mr Ed is being shown); curiously Dolittle seems to have encounters with former colleagues turned medical practitioners in multiple versions of this story, antagonist and/or jealous of him. So here, it’s the uncredited Paul Giamatti who is required to release Dolittle after his cat divulges details his secret fetishes to the doctor. Elsewhere, Jeffrey Tambor is a snotty vet who refuses to take advice from an actual doctor, while Oliver Platt provides solid Platt sidekick support as only he can.

There’s a sweet moral delivered by Ossie Davis as Dolittle’s dad (“Sometimes daddies are the ones who need to change”) – albeit, he did call for his son to be exorcised in the prologue – but the picture’s too brief and reliant on animal-based laughs to get mired in sentiment. Notably, while Murphy returned for a redundant cash-in follow up, this version of the Doctor Dolittle franchise would run to five canonical entries, courtesy of Kyla Pratt appearing as daughter of Dolittle (she features in all of them) and taking over as lead – and a doctor – from the third (straight to video) instalment.