Now you’ll sing for me. And I’ll play, and we’ll be together, forever. 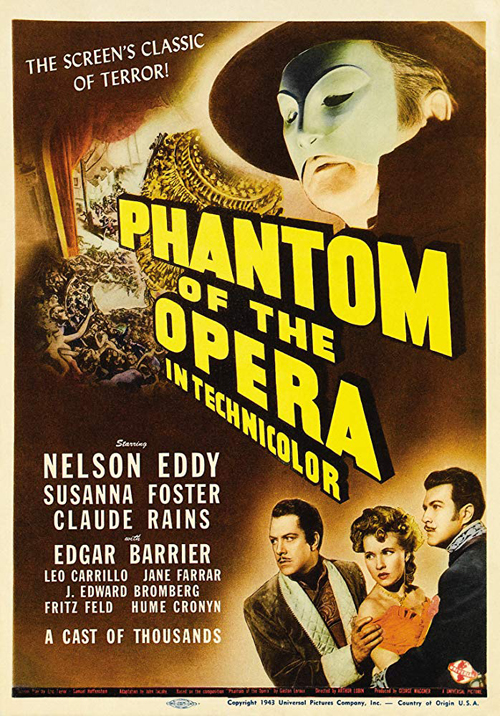 (SPOILERS) I can’t say I’ve ever been especially au fair with Phantom of the Opera lore, such that I wasn’t even aware this version (included on the Universal Monsters Box Set) was the remake of the original featuring Lon Chaney’s deliriously unsettling visage. Arthur Lubin’s colour production is an altogether lusher affair, one that backpedals on the horror in favour of melodrama and extended musical – well, operatic – interludes. And, surely rather defeating the point of the exercise, it’s a more engrossing picture before Claude Rains’ Erique Claudin suffers an excruciating facial disfigurement.

In part, that’s because the reliably watchable Rains’ role after this point is perfunctory to say the least, pushed off screen for the most part (indeed, he ends up as a shadow on a wall, not even occupying the same visual space as the person with whom he’s interacting), and partly because there’s more time to focus on the protagonists, who are a wet bunch.

Chief offender is Susanna Foster’s Christine DuBois, a budding soprano for whom Claudin has secretly been footing the singing lessons bills; it’s entirely impossible to figure out why Claudin’s so taken with her, such that I was almost on the side of diva Biancarolli (Jane Farrar), whom we’re supposed to loathe. Until she gets flattened by a chandelier, anyway. Then there are her two suitors, smug baritone Garron (Nelson Eddy) and plodding plod Inspector Dubert (Edgar Barrier). The latter is actually fairly canny until his plan gets people killed, so Garron comes up with a better one; the comedy of competition between them tends to the tiring rather than appealing, although it does culminate in their genuinely amusing agreement to go to dinner together.

But its Rains as the diminutive violinist, a perfect gentleman of an obsessive stalker, frittering away his earnings on an unattainable young woman, losing his touch in his trade and then having his work stolen, who touches a cord during the opening section (you can readily see how this relationship was originally written as Claudin’s daughter, however, as it could play as secret doting until the point he confesses his love). The moment where he discovers his compositions, which have been labelled worthless, are actually highly prized, is a classic worm-turning moment (“Thief! You’ve stolen my music!”) He promptly receives a tray of etching acid in the face (ultimately satirised in Gremlins 2: The New Batch) and flees for the sewers.

The half-measures of his deformity (Rains was apparently quite particular about it) speaks to the picture’s general restraint and lack of impact once Claudin has become the phantom. Sure, he kills a few people, but the reactions to him are as frequently comedic, and the sense of threat is fairly mild even when he has kidnapped Christina.

There are also, as mentioned, far too many musical longueurs, in which we’re presumably supposed to nod along to the operatic splendour. The star of the last half is the set design, especially the catacombs beneath the opera; one wonders what a more versatile director than Lubin might have made of it all. Pauline Kael dismissed Phantom of the Opera as “flaccid, sedate” and a “bummer”, which probably near-enough matches the general verdict and not entirely unfairly, but Rains ensures that it’s nevertheless fairly watchable.