You can’t keep the whole world in the dark about what’s going on. Once they know that a five-mile hunk of rock is going to hit the world at 30,000 miles per hour, the people will want to know what the hell we intend to do about it. 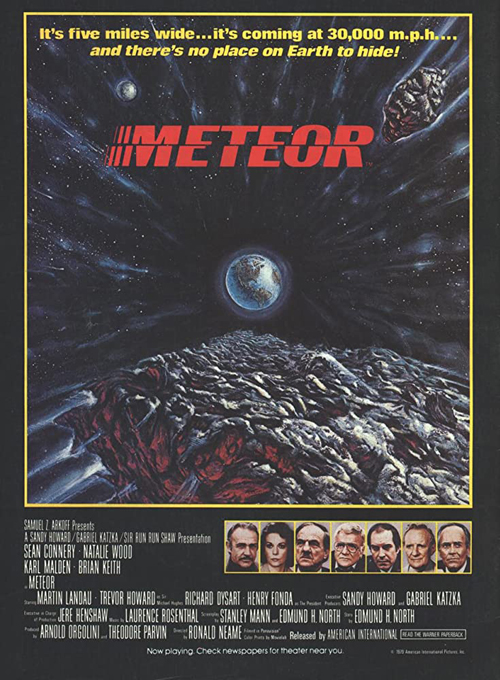 (SPOILERS) In which we find Sean Connery – or his agent, whom he got rid of subsequent to this and Cuba – showing how completely out of touch he was by the late 1970s. Hence hitching his cart to the moribund disaster movie genre just as movie entertainment was being rewritten and stolen from under him. He wasn’t alone, of course – pal Michael Caine would appear in both The Swarm and Beyond the Poseidon Adventure during this period – but Meteor’s lack of commercial appeal was only accentuated by how functional and charmless its star is in it. Some have cited Meteor as the worst movie of his career (Christopher Bray in his book on the actor), but its sin is not one of being outright terrible, rather of being terminally dull.

Connery had actually wrapped on the picture by early ‘78, and managed to make and release The First Great Train Robbery (which is actually quite good) in the period prior to its October 1979 debut. All that time devote to special effects doesn’t remotely come across on screen, with extensive miniatures used for disaster effects (tidal waves and the like), but the majority of the movie taking place in very static, talky office locations, where conversations play out between cardboard characters handed uninvolving dialogue. I don’t think the meteor itself, given its own ominous “BRRRAMMMM” motif by composer Laurence Rosenthal, looks too shoddy, though (many have attested otherwise).

Connery is Dr Paul Bradley, and never seems less than an unlikely boffin since he’s supposed to be dynamic lead Connery, rather than the boffin type he could easily play (and did as Indiana Jones’ dad). He’s sporting a fairly duff rug here, but to its credit, the syrup manages to stay fixed on his head even when he’s covered in mud. As he is during the grand climax, when a splinter of asteroid Orpheus (struck by a meteor in the asteroid belt) hits NYC and everyone flees to the subway. We’ve already seen fragments strike Siberia, cause an avalanche in the Swiss Alps and a tsunami in Hong Kong, but we don’t care about them because Sean’s not there. And they aren’t English/Scottish/American. Although, to be fair, we don’t really care about the English/Scottish/Americans either, because they’re so uninteresting and the proceedings are so desperately devoid of tension. They'd be even more so if they'd incorporated alternative ideas regarding meteorites and asteroids. There'd barely be a movie!

A big part of the picture, ostensibly, is focussed on forwarding East-West collaboration and leaving differences at the door to overcome the threat. The screenplay was By Edmund H North of The Day the Earth Stood Still, so there was pedigree on that side, rewritten by Stanley Mann. But if the sentiment is sound, the delivery is leaden. Connery needs a vague romance, naturally, so he gets Natalie Wood’s interpreter for Brian Keith’s Russian scientist (Keith had played the wind to Connery’s lion a few years prior). Also in the cast, largely forgettably, are Karl Malden, Trevor Howard and Henry Fonda (as the US President). Martin Landau is the most memorable as a ranting general (“Not one promise of calamity has come true!”) who recants when every word of Sean’s warnings come to pass.

The most engaging part of Meteor is actually the retro narration from Peter Donat (probably best known today for William Mulder in The X-Files) that opens and closes the picture: “The asteroid belt: a vast junkyard of metal and rock orbiting the Sun between Jupiter and Mars”. Ronald Neame had scored early in the decade with The Poseidon Adventure, but that picture, by its nature was constantly moving. He had no such luck here. And besides, time had moved on in a few short years. When it came out, Meteor looked like an instant antique, and not one to cherish; it grossed less than half its cost. It’s no wonder Connery’s character keeps asking for Scotches.