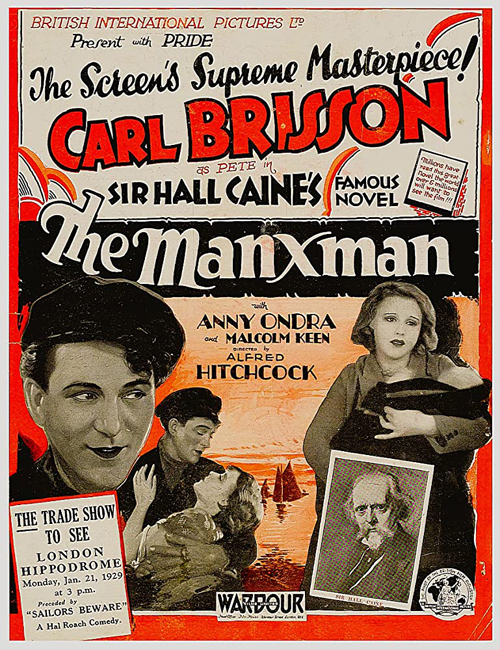 (SPOILERS) I can’t say I blame Hitchcock for being so dismissive of this turgid love triangle fodder when Truffaut broached the picture with him. The Manxman may have been his final silent, but his adaptation of Hall Caine’s novel of the same name has very little to say for itself. Even its most unusual element, the setting, is rather undermined; if the Isle of Man scenery looks surprisingly idyllic, that’s because it was shot in Cornwall.

Apparently, the inauthentic choice of location resulted from the Manx-based author trying to stick his oar in. The film features Carl Brisson, the lead from The Ring (one of the director’s better silents), as poor duped fisherman Pete, and Malcolm Keen, the comic-relief plod from The Lodger, as Philip, his best pal and the guy who plays dirty with his dame. Brisson is solid as the chiselled sap, sometimes adopting Father Dougal-esque levels of bafflement, but Keen fares less well as the deadly earnest lawyer (and prospective Deemster). He embarks on a tawdry affair with Kate (Anny Ondra) when Pete goes off to Africa to make his fortune (dad Randle Ayrton has forbidden her marriage to a “penniless lout”). Then word comes back that he has snuffed it.

In the first instance, Philip appears honourable and earnest, having gone all Cyrano de Bergerac for his bashful pal. However, that doesn’t stop him knocking Kate up (complete with some Hitch mill-grinding symbolism to let us know the train is entering the tunnel). Her attraction to Philip isn’t really clear; she doesn’t seem to have any interest in Pete (“We’re free!” she squeals when news of Pete’s death reaches them), and one gets the impression she’s really in it for the thrill. The only difference between this and EastEnders is that no one calls her a slag.

To be fair to Kate – and Ondra really isn’t selling her as a good-hearted sort deep down – this clearly isn’t about money, since Pete comes back alive and loaded and she still wants Philip. “A trusting, joyous husband – an adored unhappy wife whose secret misery brought death into her soul” the subtitle tells us. Sheesh. And that’s before she tells Pete he’s going to be a dad.

Matters come to head in court when she’s brought up on charges of trying to top herself in the harbour; she comes before lucky old Philip on his first day as a Deemster (judge). You can’t write this stuff but Hitch tried; Pete turns up to plead for her, then her dad to disgrace Philip in front of everyone. All of whom congregate at the cottage window to see them go their separate ways. Hitch called it a “very banal picture”, and Truffaut noted its humourlessness, as well as the love-triangle parallels with Under Capricorn. The Manxman is tawdry stuff, but desperately unengaging.