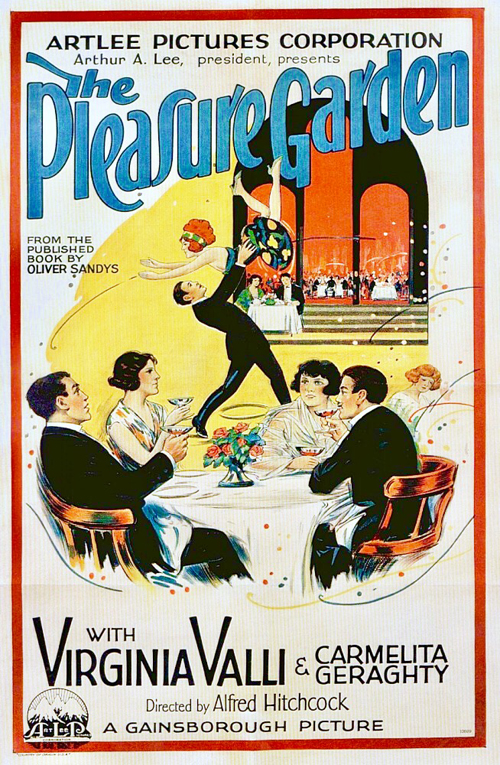 (SPOILERS) Hitchcock’s first credit as director, and his account of the production difficulties, as related to Francois Truffaut, is by and large more pleasurable than The Pleasure Garden itself. The Italian location shoot in involved the confiscation of undeclared film stock, having to recast a key role and borrowing money from the star when Hitch ran out of the stuff.

The picture owes its title to the name of the theatre where lead character Patsy (Virginia Valli) is employed as a chorus girl. She makes friends with new arrival Jill (Carmelita Geraghty), who secures a part on the show after Patsy takes her in. Much of the proceedings concern Patsy being something of a doormat, since a good heart never pays. Jill ditches fiancé Hugh (John Stuart), whom Patsy pines for, and then carries on with Prince Ivan (Karl Falkenberg), in the process showing herself to be a demonstrably fair-weather friend and only out for number one. Patsy ends up marrying Hugh’s business partner Levet (Miles Mander) but is left on her tod almost immediately when Hugh and Levet fetch themselves off to work in Africa. Unencumbered, Levet is soon carrying on with a local maiden and hitting the bottle.

None of this seems to inspire Hitch greatly, and it proves no more than a mild diversion for the audience. It’s only when events take a more dramatic turn in the final act, as Patsy goes out to join her debauched hubby, that you sense the director is really engaging with the material. Levet proceeds to drown his floozy and threatens a feverish, bed-bound Hugh when Patsy, repulsed by her husband, goes to tend him. Mander delivers a convincingly demented, shambolic turn; we knew he was a stinker as soon as we witnessed his dreadful jumpers during their honeymoon by Lake Como, but now he’s outright vile. Hitch evidently enjoys having him haunted by an apparition of his victim, before deciding he needs to run his wife through.

The director’s third film, The Lodger, is commonly regarded as the first Hitchcock “proper”, and there’s little in The Pleasure Garden that’s truly noteworthy, even if one could reasonably argue his obsessions with crime and marital mistrust are evident from the very start of his career. The biggest impact is made by faithful hound Cuddles, however, evidently on hand to garner easy audience affection (it worked on me); he’s most upset, waiting at the door, when Patsy marries and leaves on honeymoon, and we think Hitch may have forgotten all about him. But no, in the final scene, he’s still there, waiting, and welcomes Patsy, and particularly Hugh, home; the wise old pooch proves a fine judge of character.