I used to pay to come to places like this – now they pay me. 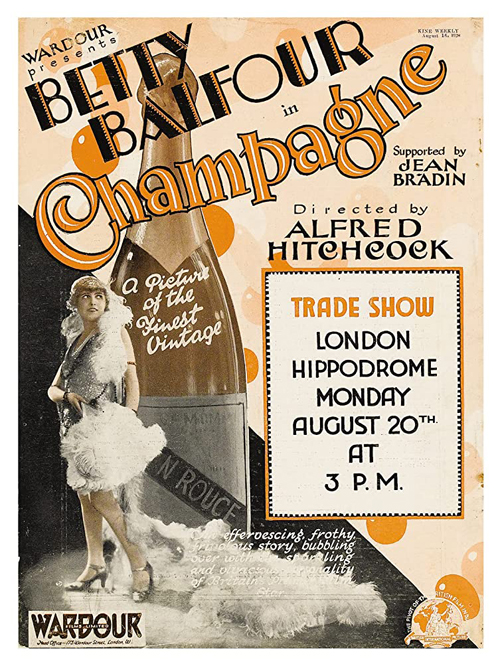 (SPOILERS) Hitchcock called Champagne “probably the lowest ebb in my output” and I’d like to be able to suggest it isn’t so bad really, but it is actually pretty banal stuff. When a title comes first (as he told Truffaut), it’s probably no surprise that the content turns out to be a stiff, but I don’t think it needed to be. Indeed, his chief complaint (“There is no story!”) could easily have been remedied. After all, the setup isn’t really so far from Trading Places.

The problem is, the screenwriters – one of whom is Hitch himself, the other Eliot Stannard, a fixture of the director’s silents – do nothing with it. Things look promising for a moment when we see Gordon Harker in the first shot, working with the director again. Unfortunately, he’s largely out of the picture, serving as the disappointed champagne millionaire dad who, in order to put a cramp in his daughter’s carefree, boozy, profligate lifestyle, announces he has lost all his money in the stock market (“Wall Street took advantage of my absence”). An interesting premonition of events of the following year. It’s a ruse, but it means Betty (Betty Balfour) has to go out and get a job.

Dad doesn’t approve of her beau Jean Bradin either (imagine Chevy Chase without the, er, charm). He’s a “cake hound” and a “boulevard sheikh”. Betty’s relationship with Bradin is on-again, off-again (he delivers a nice put down when she appears in a ridiculous frock – “I always understood that simplicity was the key note of good taste” – but is otherwise a bit of wet blanket). She has also inspired the attentions of mysterious older moustachioed man Ferdinand von Alten, who turns out to have been a pal of dad’s, hired to keep tabs on her.

Betty secures a job in a restaurant fixing carnations to diners in DJs, and it isn’t long before her admirers and her father rock up. It all ends well, just about, with a shot of von Alten looking at the couple through his champers glass, but the actual twist of his identity is one of very few instances that grabs the intention during a mostly tedious affair (and that’s without suffering the twenty-minutes longer 2012 restoration). Also diverting is the fantasy/nightmare sequence where Betty imagines herself ravished/molested by the moustachioed man, an early example of Hitch pulling the rug from under his audience.

Hitch was more impressed with his sight gag of a drunk guy on the ship staggering in calm seas but walking straight as an arrow in rough ones. Which is fair enough. Unfortunately, Champagne rather sinks due to a singular lack of mirth anywhere else. Harker is handicapped in a straight role and Balfour (the British Mary Pickford, allegedly) fails to charm our socks off.