I’m keen on golden hair myself, same as the Avenger is. 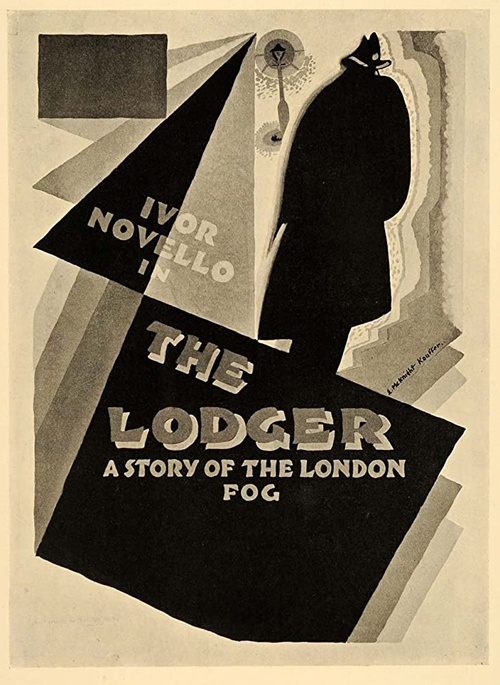 (SPOILERS) Hitchcock’s third feature, and the one you’ll hear about as being vital to informing his future style and sensibility. Unsurprisingly, then, it involves suspense and grisly murder. The Lodger finds a Ripper-type killer on the loose – whom we never see – and takes as its main thrust the “Is he or isn’t he?” of the mysterious new tenant in the Bunting house. Since he’s played by Ivor Novello, obviously, he isn’t (at least, that was Hitch’s audience-savvy reasoning), but the scenario allows the director some playfulness along the way to the character’s eventual exoneration.

While there’s a tendency for the silent Hitchcocks to rather “amble” along in narrative, in part due to their predominately melodramatic content, The Lodger has some guts to it. Meaning that, in its own embryonic way, it’s the director’s first suspense picture. Hitch himself referred to it as “the first true ‘Hitchcock movie’”. Based on a novel of the same title by Marie Belloc Lowndes, itself based on the Jack the Ripper murders, Lowndes establishes that Novello’s character (Jonathan Drew) is the killer. In the film version, however, he’s just shady and temperamental and has a thing for blondes (like Avenger himself, the actual killer, who leaves a calling card with that name at the scene of the crime; the first Avenger, if you will).

Hitch didn’t outright say that he wanted the film to follow suit, but he liked the idea of the ambiguity. As it is, it’s easier to look at The Lodger as a precursor of Psycho and Frenzy, but one that, like Suspicion, chickens out when it comes to the crunch.

Hitchcock and Truffaut discussed the stylistic influences on The Lodger at some length (Hitch was particularly influenced by German expressionist cinema at this point). In particular, the signature sequence of the pacing Novello achieved with a glass ceiling and a swaying chandelier. I was more taken by the lodger’s arrival at the door, freaking out Mrs Bunting (Marie Ault), and the later scene in which Ivor is playing chess with their daughter Daisy (June Tripp), a blonde fashion model, and he reaches for the poker. Is he about to clobber her? No, just stoke the fire.

Hitch also has fun with the propensity of the public and press to exaggerate and spin the dangers posed, such as a japester doing an impression while a witness is giving her account of the man’s features (“Tall he was – and his face all wrapped up”). Later, in her dressing room, another girl performs a fake frenzied knife attack. Thick policeman Joe (Malcolm Keen, quite amusing), who is besotted with Daisy and most affronted by Drew’s interest, tells her “I’m keen on golden hair myself” and boasts how he will catch the murderer with “a brand-new pair of handcuffs”).

Everyone has it in for poor Ivor, who is actually on the trail of the killer in revenge for his murdered sister (it was his mother’s dying wish; no, really), thus making this the first of the director’s pursued innocents who must clear their name and solve the crime. Although, in this case, the crime is solved for him, and it’s only left for Joe, a decent sort after all, to save him from the angry mob.

The Lodger features the first cameo by the director (“Extra in Newspaper Office”). The notes accompanying the Network release suggest an incestuous subtext between Drew and his sister, but there isn’t really anything to substantiate this other than wishfully connecting it to Shadow of a Doubt (where the incestuous subtext is also fairly wishful).

That restoration is very nice, with appropriate tinting, and an effective Nitin Sawney score (less effective are several sung pieces). Legend tells how The Lodger became a big success in spite of attempts to quash it by Gainsborough’s jealous star director, but Michael Balcon arranged for it to be shown to the press; it took off, as did Hitch’s career (curiously, Wikipedia has a different account to Neil Sinyard’s, whereby it is Balcon who tried to shelve the picture).

Charming. Now she's got the old boy's money, she's making a play for the younger one.

October 28, 2020
Woman of Straw (1964)
(SPOILERS) The first fruit of Sean cashing in on his Bond status in other leading man roles – he even wears the tux he’d later sport in Goldfinger. On one level, he isn’t exactly stretching himself as a duplicitous, misogynist bastard. On the other, he is actually the bad guy; this time, you aren’t supposed to be onside his capacity for killing people. It’s interesting to see Connery in his nascent star phase, but despite an engaging set up and a very fine performance from Ralph Richardson, Woman of Straw is too much of a slow-burn, trad crime thriller/melodrama to really make a mark. All very professionally polished, but the spoiled fruits of an earlier era.
Post a comment
Read more