Okay, we’re in space now, so it’s not North. It’s port and starboard. 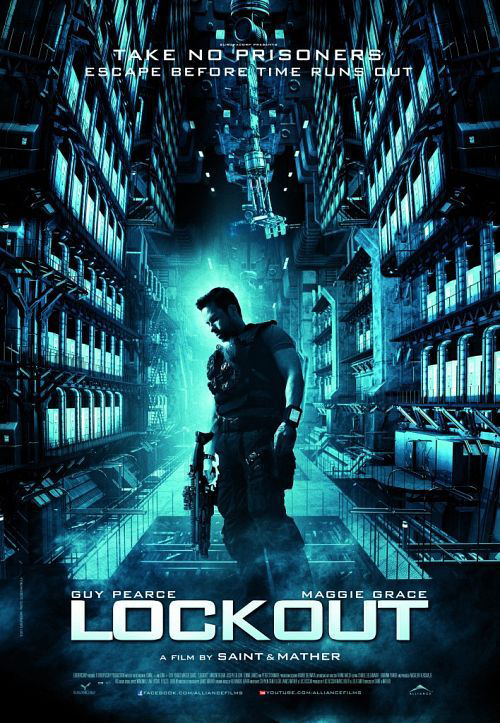 (SPOILERS) Luc Besson’s “original idea” may have been found guilty of plagiarising both Escape from New York and Escape from L.A. (although, the idea that anyone would want to steal from the sequel…), but the real shame of Lockout is that it wasn’t a Snake Plissken movie. Which isn’t to suggest it’s a whole lot more than a routine actioner with a no-frills, at-best-serviceable screenplay, yet such credentials still put it way out ahead of either L.A. or the at-one-time Escape 3, Ghosts of Mars.

Besson’s producing oeuvre has been shamelessly chock full of derivative man (or woman) on a mission fare, sometimes elevated by inventive direction, at others by an amusing performance. Much more rarely by the writing (perhaps unsurprisingly, since Besson has upwards of forty story/screenplay credits since 2000 alone, and that isn’t including TV). And rarer still when Oliver Megaton is involved. SF has tended to remain in Besson’s directorial domain, however, and he clearly knows one of the keys to quality SF is world building. Both The Fifth Element and Valerian: City of a Thousand Planets were sumptuous visual feasts (even if the latter fell down in numerous other respects). Escape from New York, meanwhile, had an arresting premise combined with a larger-than-life hero and tantalising slivers of future history.

Unfortunately Lockout, being a Besson churn-em-out quickie, can’t be bothered with such inventiveness. The proceedings are set in space, 2079, with the protagonist sentenced to space prison MS One, where the President’s daughter has just been taken hostage (I know, right – what was Carpenter thinking in suing?) Despite this orbital premise, directors Stephen Saint Leger and James Mather tend to emphasise the earthiness of this clink as much as possible. Sure, there’s a space ague from being in stasis so long, but otherwise, much of what you see here wouldn’t look too out of place in an Escape Plan or Lock Up. Mather is principally a cinematographer, making his feature debut, while Leger double duties as both a director and AD (mostly on Vikings, it seems). Both also receive co-writing credits. Neither has a feature or script to their name since.

Which you might think speaks volumes. It might be a response to Lockout’s relative box office failure, of course. But neither does a bad job in either department. Basic, certainly. There’s some choppy editing (possibly a consequence of editing for PG-13 although it was 15 in UK), and some naff CGI, but for the most part, they deliver where its important: in the action stakes. Where they definitely stumble, however, is in offering anything in the way of memorable characters.

Guy Pearce’s Snow isn’t even a Plissken clone; he only appears not to give a shit, but really, he’s a good guy CIA guy (I know, a contradiction in terms). He even brokers a tentative romance with Maggie Grace’s president’s daughter (so nothing like Snake; any women he meets end up dead). Snow also comes equipped with some absolutely dreadful one-liners (“His name was fuck you… Yeah, he was Asian”). That you end up liking him is entirely down to Pearce’s charisma. So much so, I’d have been quite happy to see another Marion Snow adventure (Pearce seems to have been more commonly taking supporting parts of late, which is a shame, particularly when he’s called on to provide straightforward villainy).

Grace is fine as privileged progeny Emilie; presumably, Besson gave her the role as recompense for the ridiculous daughter in distress of the Takens. In which case, he still owes her big time. Peter Stormare trots out hard-nut Peter Stormare on autopilot. Lennie James trots out sympathetic Lennie James. Vincent Regan and Joseph Gilgun make more impact as the criminal brother duo, one older and more seasoned, the other a buy-eyed nutcase. Gilgun attracts all the attention, but despite that, his is an entirely familiar swivel-eyed crazy and not especially rewarding (it’s also a relationship that, unwisely, is indebted to, amongst others, From Dusk Til Dawn).

The last ten minutes are a jumble of expository twists exposing the real bad guy, getting Snow off the hook and giving him the location of the stolen secrets: all of which only serves to emphasise that nothing in the set up mattered at all, because Leger, Mather and Besson completely failed to make these stakes count for anything. That shouldn’t be surprising, as they’ve created no sense whatsoever of this 2079 world. Even Carpenter manages that in Escape from L.A. Lockout is basically 2012, but with a big space prison. I think it’s pretty clear 2079 won’t be like that. The big prison won’t be in space for a start.