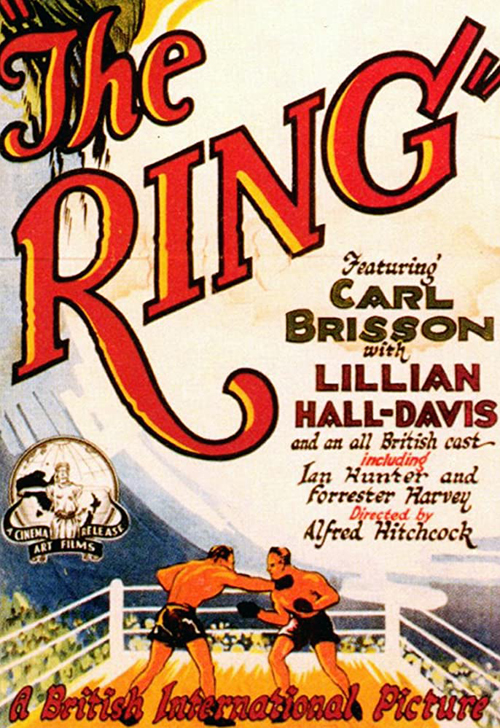 (SPOILERS) Hitchcock’s boxing movie, although the title lends itself to multiple readings (boxing ring, engagement ring, the arm band given to the girl by the smooth-talking fly in the ointment). While having a scrap is the profession of both protagonist and antagonist – matches bookend The Ring, with another in between – the real war waged is that of relationships, and our hero’s cuckolding by his easily-distracted wife, all eyes for his sparring partner.

This is a curious picture in that there’s absolutely zero benefit of the doubt for Mabel (Lillian Hall-Davis). She’s instantly swayed by the success of Bob Corby (Ian Hunter), the Australian heavyweight who prances in at the opening and swiftly beats her beau “One-Round” Jack Sander (Carl Brisson, who at least looks more pugilism-ready than the slightly doughy Hunter). Indeed, at one point, Sander is told “She’s all right really – trouble is, he’s a champion, and you’re not – yet”. Why, after winning her back, Jack remotely trusts her not to go off with someone more competitive when he inevitably goes off the boil is anyone’s guess.

Actually, Hitch’s presumably, since he penned The Ring with an uncredited Eliot Stannard. If it doesn’t hold up to much analysis, the conflict means this is one of the director’s more engaging silents. Right from the start, which is something of a misdirection, since Corby shows up at the fairground and rather magnificently knocks six bells out of the cocky Sander. Any consequent admiration for Corby quickly subsides, however, as he’s making eyes for Mabel, buying her bracelets and carrying on with her after Sander and she have tied the knot. He’s an absolute bounder, and has the cheek to look almost mystified that Sander should object so strongly to his behaviour.

Most notable amongst the cast is the peerless Gordon Harker (later Inspector Hornleigh) as Jack’s trainer, just as much of a presence without his inimitably grouchy tones. A wedding scene features a liberal dose of Hitch humour, including conjoined twins disagreeing over which aisle to sit in, and Harker picking his nose, dropping the ring, and then later at the reception downing a pint in one and getting progressively blotto. Also of note, one of Jack’s associates is a black boxer, leading to a rather regrettable subtitle in which we learn “If you win this next fight with the n*****, you’ll be in the running for the championship”.

Hitchcock’s innovative approach is fully in evidence, from a time lapse showing Jack’s name moving up in the leader board as he approaches a championship fight with Corby, to a number of point of view sequences (notably Harker drunk, and Sander blurry eyed after being knocked down by Corby in their final fight). The Ring was the director’s first film for British International Pictures after leaving Gainsborough, and began an uptick in his output.