The beginning of any new society is never charming or gentle. 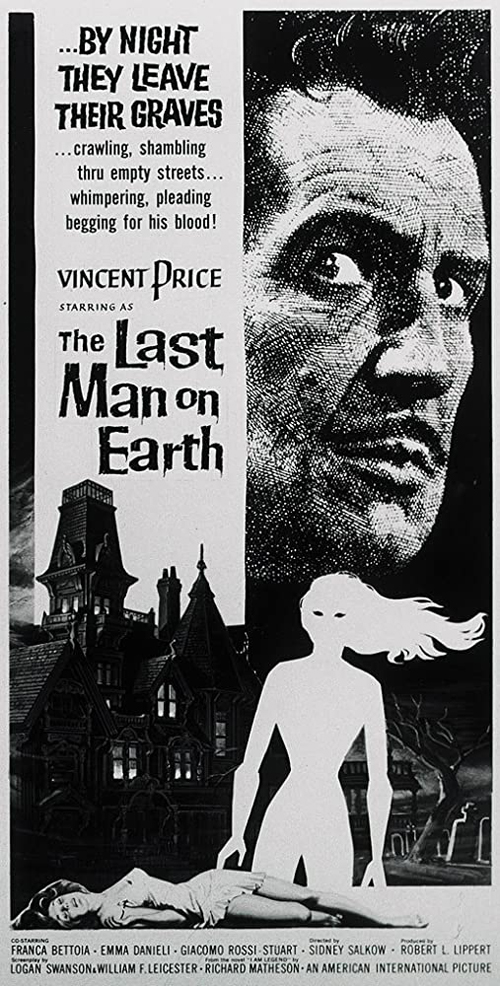 (SPOILERS) I get the impression that some – purists – regard The Last Man on Earth as the best of the three I Am Legend adaptations simply by default: because it’s the most faithful version, regardless of other diminishing factors. Which was pretty much Richard Matheson’s take (“I was disappointed in the film, even though they more or less followed my story”). The truth is, the movie is quite watchable, largely down to Price (whom Matheson felt was miscast), but it’s only ever a bare-bones, basic piece of work.

That basic quality makes it easy to see why George Romero was taken with it, and would credit the movie for inspiring the zombies of Night of the Living Dead. Which means The Last Man on Earth is quite the forebear. Or alternatively, has a whole lot to answer for. Because the shambling, erratic, laughably-inept zombie vampires attempting to break into Robert Morgan’s home every sundown really do suggest Romero’s zombies (I’ll wager, if you come to the movie cold, it’s the first thing you’ll think of). There isn’t a whole lot of tension to go along with that, but that’s of a piece with the iffy direction from Sidney Salkow and Ubaldo B Ragona and the mostly iffy acting from an Italian cast (zombie vampire Ben, played by Giacoo Rossi Stuart, is especially amusing).

The picture lacks the range or thematic depth to truly grapple with the theme of loneliness, extolled by the novel’s advocates as its greatest achievement. Part of that is spending too little time with Price alone; we’re always either insulated by a voiceover, his daytime activities – does garlic stay fresh for three years? And why isn’t he busy planting some rather going to the supermarket for past-their-sell-by-date supplies? – flashbacks, or his not-actually fellow survivor Ruth (Franca Bettoia).

The flashbacks offer probably the most affecting and engaging material, however. The progress of the plague is sketched out suggestively (“Is Europe’s disease carried on the wind?” asks a newspaper headline). Price’s Morgan is a scientist, in contrast to the novel, and forwards the view that “I just can’t accept the idea of universal disease” (if only there were more like him just now!) His colleague Ben, who will succumb to paranoia and then vampirism, wonders if this may bear all the hallmarks of your classic, go-to, hysteria-generating contagion: “Is it possible this germ or virus could be airborne?”

The novel appears to suggest the pandemic derives from bacteria (in contrast to popular and proliferate viruses). Albeit, rather unevenly spread by mosquitoes (which could make sense) and dust storms (less so). Matheson piles on a whole load of pseudo-scientific vampire lore, which in this version, with its mirrors and strings of garlic, comes across as plain silly (although, it’s a neat reversal that a bat furnishes Morgan’s immunity from the plague – it bit him a long time ago in Panama – as a twist from their usual unwarranted vilification).

It’s unusual to see Price in a “straight” role, particularly tackling the loss of his daughter and wife with something approximating a restrained manner. The former goes blind with the disease and, when his wife (Emma Danieli) ignores his instruction not to call the doctor, is disposed of in a perma-burning pit of the diseased. Virginia also succumbs, but she returns from the grave after he buries her.

Unfortunately, it’s the element that wins The Last Man on Earth all the brownie points – the retention of Matheson’s twist – that disappoints. It lacks the all-important impact of Price being regarded as a legend, feared by Ruth and her fellow infected non-zombies (who have come up with a vaccine that holds off the worst effects: “We’re alive. Infected yes, but alive”). Morgan has been travelling around town, staking the “alive”, and they, not unreasonably, want shot of him. I’m not sure the development of Morgan developing a permanent cure via a transfusion bears up to close scrutiny – why would he only realise the reason for his immunity now? Unless it’s only the presence of Ruth that gives him cause and opportunity – but it adds an ironic poignancy to his being hunted down and killed. As for the black-clad army, the “freaks” who do for him, they’re possibly even less imposing than the undead.

Above and beyond The Last Man on Earth’s protagonist-antagonist reversal, it’s interesting to consider that Morgan, “a man. The last man”, unadulterated in his biology, can have no place in this “new society” anyway; the prospects for any resisting the incoming technocratic age’s vaunted gene-altering vaccine, those who do not wish to become the “new humans” in the new society of tomorrow, might be similarly construed.