There’s a female or two be floating around my mind like the smell of a Sunday dinner. 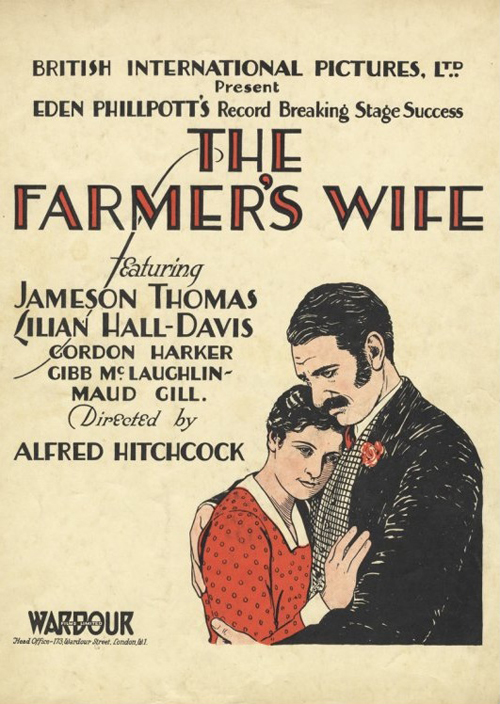 (SPOILERS) Hitchcock adapts a romantic comedy from Eden Philpotts’ stage play, which starred Laurence Olivier in the lead at one point. The Farmer’s Wife would later be remade in 1941, and while I haven’t seen that version, I suspect it lands better; it would, after all, be able to rely on the verbiage that comes with a courtship farce. Hitch’s version quickly becomes laborious, despite the best efforts of a bald-capped Gordon Harker in a supporting role.

Harker’s the amusingly named Churdles Ash, handyman and idler to Jameson Thomas’ farmer Samuel Sweetland. Both actors are playing older, but Thomas rather manages to overdo his randy widower. Sweetland attempts to get back in the saddle after his daughter marries but finds himself serially turned down by the various less-than-prized types he blindly proposes to. There needs to be some degree of sympathy for Sweetland in order for us to invest in his eventual realisation of the fool he’s been, and that his most suitable mate has been under his nose all along in the form of doting housekeeper Minta (Lillian Hall-Davis, who previously appeared in Hitch’s The Ring). Instead, we rather wonder at her willingness to accept his “couldn’t find anyone else” proposal (as she says, “Tis fearful sudden”).

I’m not quite sure what age Sweetland is supposed to be – “To see an old man in love be worse than seeing him with the whooping cough” comments Churdles at one point – but given Thomas’ makeup, I’d guess anything from twenty years older to twice Minta’s age. When he proposes to silly postmistress Mary Hearn (Olga Slade), she spurns him with “You… at your age!”

He’s not helping his cause any by his vocally Neanderthal attitude to relationships between the sexes, although the adaptation (By Eliot Stannard and an uncredited Leslie Arliss) generally makes a thing of unembroidered remarks. Of a prospective partner, Sweetland comments that her back view’s “Not a day over thirty” to which Minta replies “But you’ll have to live with her front view” (later another character observes of the turnip crop that they’re “proper masterpieces, round and ripe as a woman’s bosom”; these rural types, eh?) His idea of wooing hunt enthusiast Louisa Windeatt (Louie Pounds) is to call round with “I came over like the foxes you find so fond of… to pick up a fat hen”. When says that she’s too independent minded for him, he replies “You’ll only feel the velvet glove and never know I was breaking you in”. To skinny spinster Thirza Tapper (Maud Gill) he observes, “Now, some men look for a bit of fat on a female…” He’s a real charmer, basically.

Consequently, one rather sympathises with Churdles’ verdict that “I’m ashamed at Sam Sweetland offering himself at sale prices all around”. Churdles has all the best lines, including “Holy Matrimony be a proper steam roller for flattening the hope out of a man and the joy out of a woman” and when Minta announces her engagement, “They do say the next best thing to no wife be a good one”. Harker’s a natural with the comedy, of course, so even when Hitch lets his routines go on too long – which is most of the time here – he’s very easy to watch.

Hitch had little to say to Truffaut about the picture, apart from noting “There was too much dialogue”. The problem is, in contrast to the latter Juno and the Paycock, where it can be recognised as a serviceable adaptation of the play, turning The Farmer’s Wife into a silent film leaves it struggling and mugging frantically. Truffaut’s right though; the rural photography is very nice.

On the DVD introduction, Noel Simsolo puts the choice of material down to Alma’s then pregnancy and Hitch’s fascination with and reticence towards her state. Whatever his reasoning, this kind of fare isn’t his best foot forward. It needed to be lighter, swifter and more frivolous. The execution of The Farmer's Wife is closer to a grinding of gears. Notable that both leads met with early deaths (Hall-Davis in 1933, Thomas in 1939), while Philpotts’ daughter later alleged he conducted an incestuous relationship with her from her childhood until her thirties.