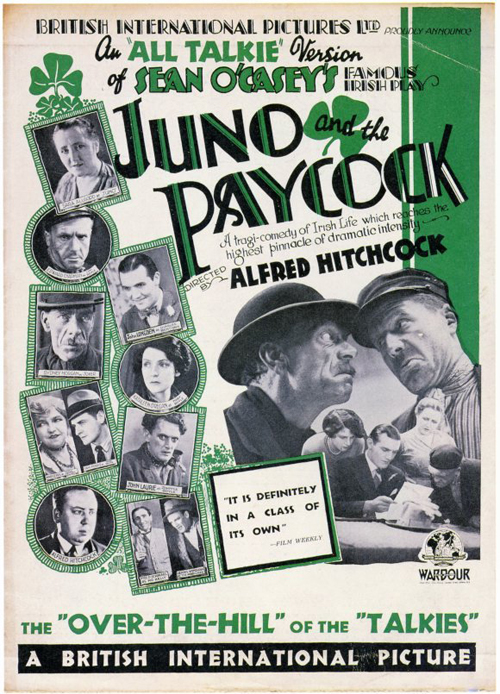 (SPOILERS) Hitchcock’s second sound feature. Such was the lustre of this technological advance that a wordy play was picked. By Sean O’Casey, upon whom Hitchcock based the prophet of doom at the end of The Birds. Juno and the Paycock, set in 1922 during the Irish Civil War, begins as a broad comedy of domestic manners, but by the end has descended into full-blown Greek (or Catholic) tragedy. As such, it’s an uneven but still watchable affair, even if Hitch does nothing to disguise its stage origins.

Well, aside from a scene at the pub, in order to get out of the Boyle household. Hitch professed to being “ashamed” of the picture, even though it “got very good notices”. His distaste was on the basis that “it had nothing to do with cinema… I had the feeling I was dishonest, that I had stolen something”. The director was of the view that, while an excellent play, “I could see no way of narrating it in cinematic form”. His conversation with Truffaut extended to a discussion of the folly of adapting Crime and Punishment and a view more movie makers should probably be given pause by (“There has been a lot of talk about the way in which Hollywood directors distort literary masterpieces. I’ll have no part of that!”). Although, by implication, he’s suggesting Du Maurier wasn’t in a class where he had to pay due diligence to the text.

More than Hitch’s involvement in a production that has little of his stamp on it, the aspect of Juno and the Paycock that struck me most was the presence of Edward “Mr Grimsdsale!” Chapman in the lead role of Captain Boyle, also his feature debut. More especially, that I completely failed to recognise him; he’s playing much older, and gruffer here (he’s five years younger than John “Frazer” Laurie, playing his son!), and it’s quite the impressive transformation. Either that, or Mr Grimsdale is (Chapman would appear in two subsequent Hitchcock pictures). Boyle’s indolent waster is the “Paycock” of the title (a play on peacock bestowed upon him by wife Juno, played by Sarah Allgood, of Blackmail and later Oscar nominated for How Green Was My Valley).

Boyle’s partial to the pub, with pal Joxer Daly (Sidney Morgan), and even keener on getting free drinks from Maisie (Maire O’Neill). He’s fond of bemoaning “Better for me to be dead” while Juno observes “It’s a miracle. Whenever he senses a job in front of him, his legs begin to fail”. There’s much comedy of this type during the first half, with only the unease of Laurie’s Johnny to temper the mood; indeed, the announcement that the Captain is set for an inheritance goes to further underline the peacock element, as he (and Juno) begins putting on airs and graces, along with down payments on various items (a suit, a gramophone).

The seeds for ruin are all there at the outset, though. Johnny has informed on a fellow IRA member to the Irish Free State police, who then killed him, and the IRA want Johnny for questioning. Meanwhile, Daughter Mary (Kathleen O’Regan) is being courted by Charles Bentham (John Longden, who would continue to work with Hitchcock for the rest of the decade as well as for the Archers). Bentham made up the will, but his error means the Captain’s inheritance is lost. He also made Mary pregnant and subsequently absconds; the picture finishes with Johnny machine gunned by the IRA, Mary faced with the prospect of going away to have the child, and Juno grieving aloud to the Virgin Mary and God at her lot. The Captain, of course, is down the pub.

There’s some wry, very Oirish humour at play in Juno and the Paycock, such as the Captain’s joyous mourning for his deceased relative (“I’ll never doubt the goodness of God again”). Chapman is very amusing at playing his ignorance and self-righteousness (pretending to know what a theosophist is when Bentham pronounces himself one), but also the occasional insight (how Chaplin has taken on the status of one of the saints). The surrounding performances are all notable (Allgood reprises her stage role). I can’t say I picked up on the Jewish stereotyping of Fred Schwartz’s tailor, possibly because there were so many big performances in there.

Juno and the Paycock is engaging, but it isn’t hugely satisfying overall. Perhaps its tonal segues work better on the stage, but also, I don’t think the overt politics here were ever its director’s thing; he’s much more at home with the marital strife.