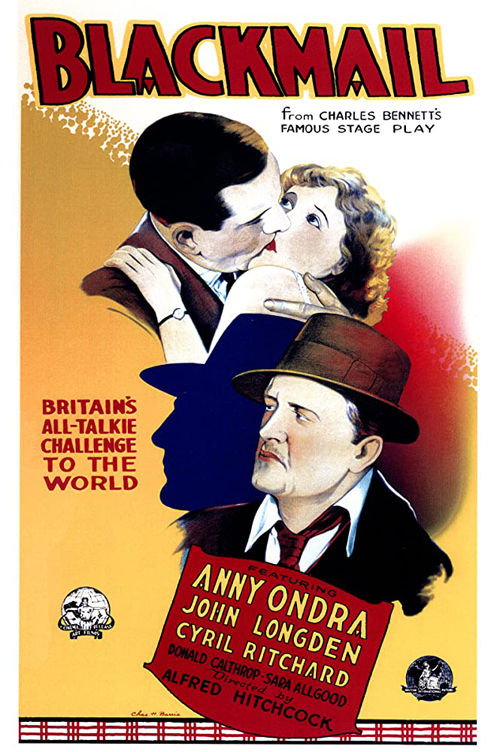 (SPOILERS) Hitchcock’s first sound film (also shot as a silent), Blackmail finds him hitting his groove, a step on from The Lodger, where he first landed in his natural crime genre habitat. This is where we his suspense muscle really begins firing on all cylinders, though, adapting Charles Bennett’s play (Bennett would go on to further cement the director’s milieu with The 39 Steps, Secret Agent and Sabotage) and using every opportunity to milk the tension from every situation for all its worth.

The plot finds Alice (Anny Ondra, working with the director again following The Manxman) fobbing off her Scotland Yard detective boyfriend Frank (John Longden, his first of three with the Hitch). The reason? To meet with artist Mr Crewe (Cyril Ritchard), who promptly attempts to rape her. Alice stabs him in self-defence and flees the scene, only for Frank to be assigned the case and find her glove. Before he can figure on a plan, they are approached by Tracy (Donald Calthrop, who’d appear in another three Hitchcocks), who has Alice’s other glove and is intent on a spot of the titular business.

Hitch gives us silence for the first seven minutes, before unveiling dialogue when Frank and Harvey Braban’s Chief Inspector have finished booking a subject. But he really comes into his own when Alice has been lured to Crewe’s flat, teasing out the predator’s sinister mind games as he first flirtatiously teaches her to paint before persuading her into a dress with the promise that he will sketch her (Ritchard could certainly draw on the basis of the scene). When he forces a kiss and she decides to leave, he takes her own dress; the whole scene plays out with a queasy rising tension, particularly due to Crewe’s casual confidence in what he’s doing. When it comes to the assault itself, Hitch plays it from behind a curtain, Alice’s hand fumbling into shot and seizing a bread knife.

It's an early classic sequence from the director, complete with punctuating cuts to an unnerving laughing jester portrait that initially elicits mirth from Alice; after the deed, she tears a hole in it. Ondra’s dialogue was performed off camera by Joan Barry due to the former’s Czech accent; I didn’t find this a distraction, though, and Ondra’s playing of Alice’s post-deed shock is particularly impressive. Hitch goes to town with the repercussions on her mental state, as a lit-up cocktail sign becomes a stabbing dagger, and the following morning’s breakfast table finds her quietly freaking out as a neighbourhood gossip (Phyllis Monkman) goes on and on about the murder; the word “knife” echoes around her head until dad (Charles Patton) asks her to cut him a slice of bread and she sends the bread knife flying across the room.

Calthrop is also highly effective as the weasely blackmailer, the sort of role you could see Fulton Mackay playing, as he cockily makes Frank pay for a cigar and then demands breakfast, even sitting in dad’s chair. It makes his comeuppance all the more satisfying when the tables are turned, with Tracy himself becoming a suspect. The subsequent chase through The British Museum (apparently suggested by Michael Powell) is also first rate, even more so considering it was mostly a cheat (Hitch used the Shufftan process in order to lend the scene appropriate lighting).

Like many a later Hitchcock, the picture revolves around the repercussions from unwise choices. We never learn why Alice wants to meet the artist (perhaps because, as an artist rather than a policeman, he is exotic and exciting), but Frank doesn’t think twice about covering up for her, so instantly digging a hole for himself.

Notably, the “happy ending” was at the behest of the producers; Hitch wanted Ondra arrested and Longden “would have to do the same things to her that we saw at the beginning: handcuffs, booking at the police station, and so on” before his partner (also per the opening) would ask “'Are you going out with you girl tonight?' and he would reply 'No, I’m going straight home'”. That’s very neat and symmetrical, but the moral chasm of the actual ending makes the picture more consistent with what has gone before and the quandaries in which the leads have found themselves.

One of the best Hitch cameos appears here too, with the director pestered by a small boy on a train; he shoos away the child, who then returns to pester him some more. For the most part, the director’s pictures up to this point are inessential (only the aforementioned The Lodger is really a must-see), and one gets the impression favourable verdicts tend to be from critics attempting to weave a coherent oeuvre for the auteur from the first. Something that doesn’t really reflect the haphazard and often ill-fitting material of his silent days. Blackmail changes all that with a considerable flourish. 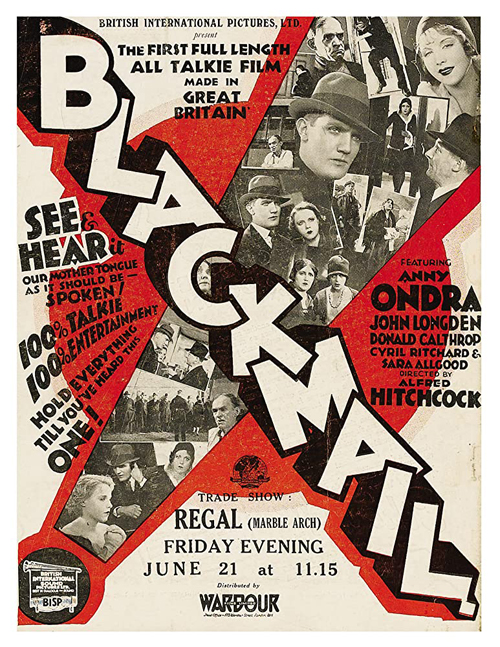 Charming. Now she's got the old boy's money, she's making a play for the younger one.

October 28, 2020
Woman of Straw (1964)
(SPOILERS) The first fruit of Sean cashing in on his Bond status in other leading man roles – he even wears the tux he’d later sport in Goldfinger. On one level, he isn’t exactly stretching himself as a duplicitous, misogynist bastard. On the other, he is actually the bad guy; this time, you aren’t supposed to be onside his capacity for killing people. It’s interesting to see Connery in his nascent star phase, but despite an engaging set up and a very fine performance from Ralph Richardson, Woman of Straw is too much of a slow-burn, trad crime thriller/melodrama to really make a mark. All very professionally polished, but the spoiled fruits of an earlier era.
Post a comment
Read more