Every other night it’s steak and kidney pudding. 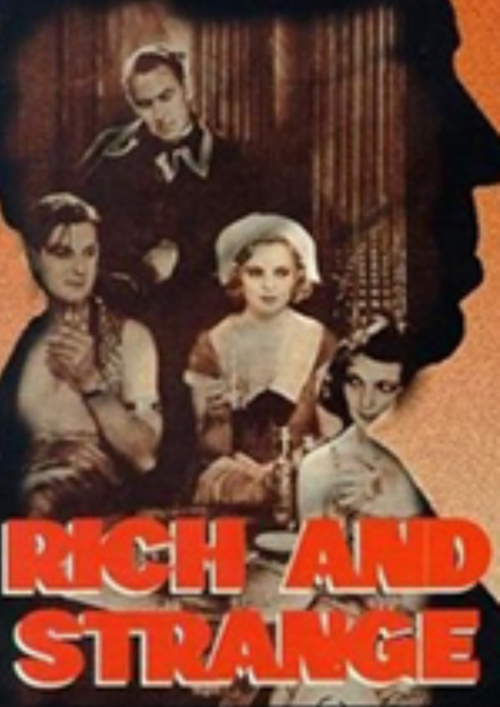 Rich and Strange
aka East of Shanghai
(1931)

(SPOILERS) Hitchcock experimented with a number of ill-fitting genres during his early sound period. As with the melodrama of The Skin Game, one senses that broad, or even “straight”, comedy was never quite his wheelhouse (The Trouble with Harry is a later example, and remains a very minor work, even as it has more traditional “thriller” elements around the fringes). Alma adapted Rich and Strange, based on Dale Collins’ novel, in which a married couple, stuck in a middle-class routine, seize the opportunity to cut loose on an expenses-paid cruise. These freedoms don’t turn out to be necessarily for the best.

So yes, there’s more of The Skin Game’s morality play aspect here (“I suppose we were happy enough in our own quiet little way until we came on this trip”). The picture, rather than focussing on the hijinks such adventuring might bring, concentrates on the romantic diversions encountered by Fred (Henry Kendall) and Emily (Joan Barry) as each is distracted by a much more exotic partner and each eventually has their illusions shattered.

Fred, holed up with seasickness, is out of the picture, leaving the dashing and charming Commander Gordon (Percy Marmont, later to appear in Secret Agent and Young and Innocent) to impress himself upon Emily. When Fred is back on his feet, he in turn falls for an alluring (fake) princess (Betty Amann). There is much canoodling and temptation before the benefits of each other’s comforting arms win out. Still, this feels like a quite daringly “explicit” experiment on their part and for the film, since both couples are evidently embarking upon much more than innocent flirtation.

Kendall and Barry are likeable leads, one unabashedly playing up “a great big coward” and the other flourishing a sweetly pretty act (Barry can be counted as an early Hitchcock blonde, but without any accompanying guile). They’re not really much more than that, though, contributing to the feeling that the picture itself is very slight, despite the rather self-important The Tempest quote that furnishes its title.

Hitchcock vouched for Young and Innocent in his discussions with Truffaut, perhaps surprisingly so, given how dismissive he could be of his work during this period. He said “I liked the picture; it should have been more successful” and felt “it had lots of ideas”. He’s sporadically quite sharp in his approach and has some interesting ideas, treating much of the proceedings as if this is a relic of the silent era. There’s much use of title cards, usually to ironic rather than explanatory effect (“Fred had met his princess”). Montage is also abundant, as one might expect of a travelogue.

And he clearly relishes the mordant, monotonous routine that opens the picture: Fred amid a sea of umbrellas, unable to open his; stifled on the Tube, which is stuffed full of people eating disgusting sandwiches in a disgusting fashion and offers no room to read a newspaper without lamping someone; coming home to yet another serving of steak and kidney pudding. “I want some life! Life, I tell you!” he tells Emily, before opining “The best place for us is the gas oven”.

The subsequent flirtations really aren’t very engaging, however. Although I suggested it wasn’t his forte, Hitch probably does better with the broad comedy, whether it’s Fred drunkenly attempting to adjust the time on his watch to the elevator dial, or the eleventh hour sinking of the ship that turns out to be a derelict rather than doomed. His cruel streak is also abundantly clear, with a running gag of animal-based humour that won’t sit well with any cat lovers (myself included). Early on, Fred is mean to the family feline; come the climax, the couple discover that the crew of the Chinese junk who saved them also fed them the ship’s cat (again, he waxed warmly over the scene when talking to Truffaut).

Notably, the couple must have burnt through quite a lot of money (a benign uncle advances Fred the cash against his future inheritance). The princess is said to have made off with a thousand pounds (equivalent of about £68,000), which Fred says he can claim went down with the ship. Thus, having boasted “And having developed the taste for champagne, what’s the use of trying to stick to water?” it seems likely that they will have to stick to just that. And steak and kidney pudding.

While earned, the restoration of tepid-but-happy domesticity at Rich and Strange's conclusion would likely have been more effective if the prior proceedings had a pacier, more screwball approach. Also notable for thirty-year-old Elsie Randolph as “the Old Maid”; forty years later she’d reunite with Hitch for Frenzy.