It’s mighty near conspiracy, this. 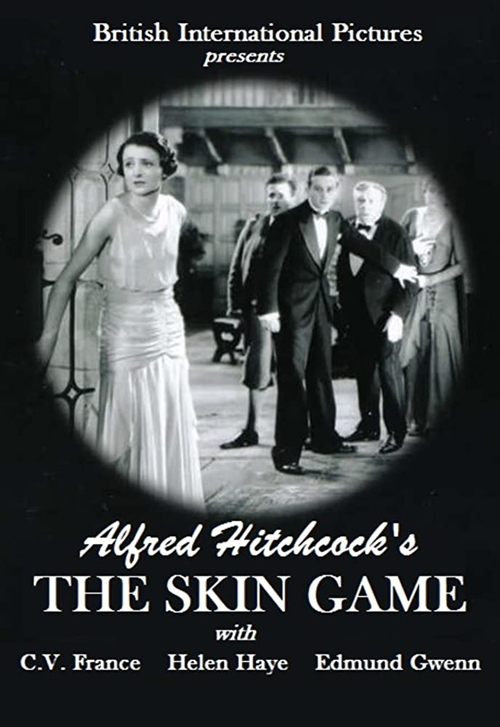 (SPOILERS) Hitchcock grapples with a melodrama concerning feuding families. However, rather than a proto-Dallas affair, The Skin Game is very much concerned with class and culture clash. An adaptation of John The Forsythe Saga Galsworthy’s play (previously made into a film in 1921), it pits landed gentry the Hillcrists against upstart businessman Hornblower and his clan, with Hornblower intent on ruining their rural idyll. There’s a moral to this tale; no good can come from the dirty tricks and underhand tactics that ensue when all-out war is declared. This is the “skin game” of the title, and it feels like far from Hitch’s thing to be so overt and on the nose.

With the director not playing to his strengths, the main point of interest becomes Edmund Gwenn’s performance. Mr Hornblower is unrepentantly uncultivated and eager to rub the more entitled Hillcrists’ noses in his plan to develop their historic land and turf their former tenants out. The class envy aspect is studiously underlined, but if one were inclined to see an intended balance in misdeeds across the parties, Hornblower’s behaviour, equally disregarding of serfs and lords, singles him out as endearing to no one. The Hillcrist family at least express displeasure at having to stoop to conquer.

Gwenn is magnificently unedifying, reprising his role from the silent version. He’d later play Kris Kringle in Miracle on 34th Street, of course, and reunite with Hitch as Johann Strauss’ disapproving dad, but this role really gives him a chance to kick out the jams. It’s the kind of part you’d earmark for Stephen Graham today (and he’d be very good). When Hornblower’s family – rather than his industry – are brought low, he characteristically has no time for the protestations of the Hillcrist patriarch (CV France). Interestingly, though, it is Mrs Hillcrist (Helen Haye) who has engineered Hornblower’s terms of capitulation, unflinching when it comes to revealing his daughter-in-law’s shameful secret (Phyllis Konstam, previously in Murder! and briefly in Blackmail and Champagne, plays Chloe Hillcrist).

There are a number of returning players here, including John Longden (Blackmail, Juno and the Paycock) as Chloe’s hubby. Most notable is Edward “Mr Grimsdale!” Chapman (his third of three with the director, after Juno and Murder!) as the Hillcrist’s go-to, can-do man Dawker. The Hillcrist’s daughter Jill (Jill Esmond) is given to tutting about how common Dawker is (she is told “My dear, we can’t all be uncommon”) and saying how she doesn’t trust him. It’s probably inevitable then, that despite his dependable machinations on their behalf, Dawker should be instrumental in the plan ultimately falling apart, with devastating consequences.

There’s some juice to this story, as you’d expect from Galsworthy, but it’s never quite Hitchcock’s cup of tea. One to put down as seeing what he could do with such material, rather than having any particularly affinity for it. As such, the best scene is predictably one where he gets to crank up the tension. An auction for a property where Hornblower intends to build another factory, each family bids higher and higher, with various proxies and signals upping the ante and drawing the proceedings out (the final price of £9,500 comes out at about £650,000, adjusted for inflation). Also notable is a sobering cut at the picture’s climax, when the fight between Hornblower and Dawker is contextualised by the sight of Chloe’s body being pulled from the pond outside.

Hitch dismissed The Skin Game during his discussions with Truffaut (“I didn’t make it by choice, and there isn’t much to be said about it”), but if the film tends to limp a little when Gwenn or Chapman aren’t in frame – the subplot regarding Chloe is particularly inert – it isn’t an unengaging picture. Its greater problem is that the balance of empathy is off due to Gwenn’s all-consuming performance.