Play to them, then! Fickle, brainless idiots. 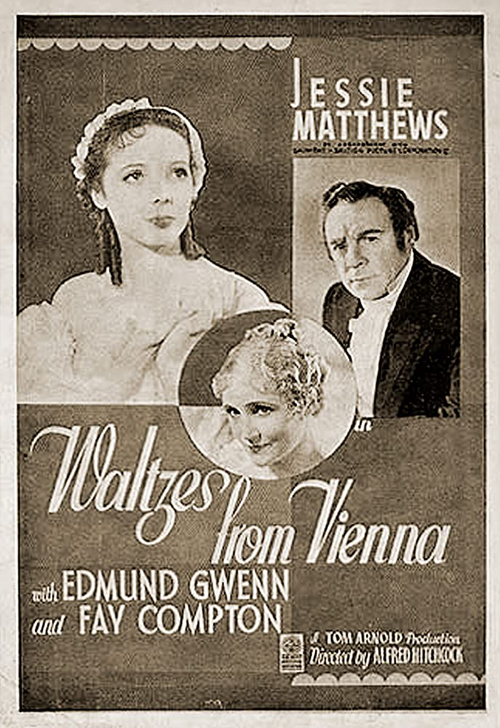 (SPOILERS) Hitchcock was dismissive of this adaptation of the stage musical of the same name, ironically minus the musical element. Waltzes from Vienna is a rather low-watt picture, with a rote romance/jealousy plotline running through it (Johann Strauss is offering his services to Countess Helga, much to the dismay of intended Resi). The film comes alive only intermittently with bits of comedy, Strauss’ rivalry with dad, and the central composition.

Esmond Knight, later a Michael Powell regular, makes for a slightly sappy Johann the Younger, although that feeds well enough into his living in the shadow of the Elder (Edmund Gwenn, very far from his Miracle on 34th Street Kris Kringle). Dad is forever berating and mocking his son’s “aborted enterprises” (“Bring me the laurel crown the emperor placed on my head and I’ll give it to him” he snarks at one point). The set-up is a kind of inverse Salieri; the Elder garners all the raves, but he is far from the musician his son is (the rivalry was indeed the case, and the Elder was more popular during his life). The picture concludes on a note of apparent acceptance, whereby the Elder signs his autograph “Senior”, but Gwenn’s done nothing to suggest this perspective hitherto.

Fay Compton is Countess Helga, who must contend with her jealous comedy count (Frank Vosper, later of the first The Man Who Knew Too Much), while Jessie Matthews’ Resi, daughter of a baker, is fiercely suspicious of beau Johann “Schani”. This gets a little tiresome after a while, but there are enjoyable distractions. A nice piece of play between the count and countess, their conversation relayed between the romantically involved valet (Charles Heslop) and maid (Berry Huntley-Wright); she asks for a rhyme for orange. The valet gives his own answer for the colour of the Danube: dirty brown (“You are making perhaps a disgusting joke” accuses the unamused count, having emerged from his dirty brown bath).

Hitch comes into his own with Schani’s central inspiration for The Blue Danube, observing the rhythms of the bakery’s production process. Resi’s father Ebedezer responds to the announcement that “I’ve just composed a song! Here in your bakery” with the very Shakespeare in Love: “I brought Franz Schubert down here. He was writing the Unfinished Symphony at the time. But did he try to finish it? No, he ate cakes”.

There’s also a very nice shot where Resi, unable to persuade the Elder to conduct the orchestra for his son’s composition, exits the room towards camera, the doors closing behind her of their own accord. Hindle Edgar’s Leopold, bakery work vying for Resi’s attentions, also has a few amusing moments (inebriated at a festival, he tells the count “I assure your excellency, it isn’t a grin. Merely a smile of politeness”). The proceedings culminate in a fight between the count and Schani (but not a duel, about which the count has nightmares), and Resi defuses the situation by taking Helga’s place in Schani’s home.

Hitch called Waltzes from Vienna “a musical without music, made very cheaply”, asserting that “at this time my reputation wasn’t very good, but luckily I was unaware of this”. Nevertheless, it’s difficult to work out quite why he finds the picture so objectionable (“I seemed to have gone into a creative decline in 1933 when I made Waltzes from Vienna, which was very bad”). It has its moments of humour and visual flourish. It’s a middling affair, while also being a curiosity in his career (a biopic, of sorts), but it is not without sporadic charm and inspiration.