Sausage. That’s what I hit ‘im on the ‘ead with. 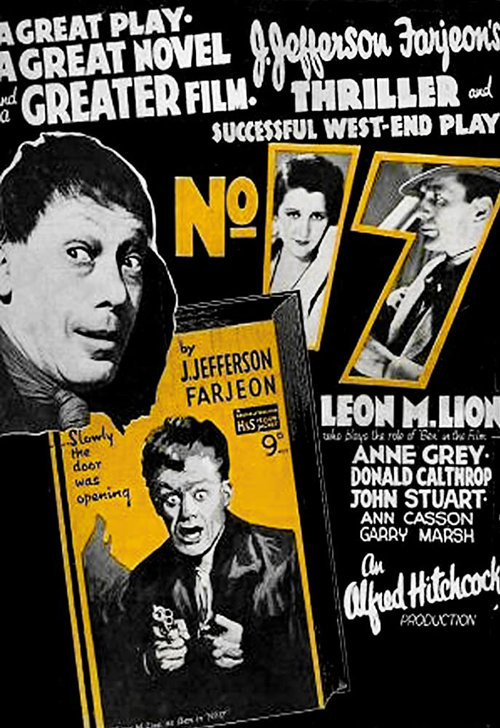 (SPOILERS) Number Seventeen isn’t exactly anaemic, or anonymous, but it is almost fiercely pedestrian, perhaps the least interesting picture Hitchcock put his name to during the 30s. It runs a slender sixty minutes, but this tale of separate parties – cons and cops and some comic relief – descending on the titular house manages to feel long for all that, starved as it is of dramatic tension and cursed with largely uninteresting characters.

It ought to have been something more than that, as a return to Hitchcock’s the crime genre that had recently paid dividends. Alas, he finds little to get to grips with. So much so, he dismissed it as “A disaster!” Which is overstating its status, but Number Seventeen starts in a non-committal fashion and never seems to find its legs. Perhaps because it spends two-thirds of its time wandering aimlessly around an old dark house, introducing new characters periodically but failing to find much reason to invest in any of them.

Hitch was assigned the picture, based on Joseph Jefferson Farjeon’s play and adapted by himself, Alma and Rodney Ackland. John Stuart’s Barton arrives at the house looking for a necklace stolen by a gang of thieves, but this motivation is initially extremely muddy, as is his status as a detective (he omits to mention his first name is Richard). Barton meets Ben (Leon M Lion), the aforementioned comic relief; it’s never quite clear why he’s there, other than to be hapless and talk about his sausage. There’s a body (Garry Marsh’s Sheldrake) that turns out not to be dead. Ann Casson (Rose) and her dad Henry Caine (Ackroyd, a policeman) arrive. Entering soon after are thieves Donald Calthrop (Brant), Barry Jones (as Doyle) and Anne Grey (Nora, initially pretending to be deaf-mute, which is just "Why?") There’s a lot going on, then, but the activity offers little interest and it is, as Truffaut put it, “rather confusing”.

Hitchcock stages an effective and full-on fight between Ackroyd and Sheldrake at one point, with the director delivering so many cuts, you’d almost think he was a proto-Michael Bay. Time Out’s Geoffrey Macnab unfairly derided the grand climax, a bravura of budget model work involving a bus chasing a train and crashing into a ferry. It may have been cheap, but it’s shot by Hitch for maximum effect, such that the side is only occasionally let down: very unfair to claim “the special effects are so crude that they make the back projection in Marnie look like the last word in verisimilitude”. I can’t say the sequence is ever quite gripping, but it does build up a head of steam, and I was amused by the “Stop by for Dainty Teas” sign seen as the train speeds by.

Number Seventeen’s conclusion bizarrely finds Barton taking Nora to breakfast after calling Doyle’s bluff when he professes to be Detective Barton (“The ironic part of it is, I’m Barton. Hard luck, Henry” he tells Doyle). You have to admire Doyle for being so chipper about being hauled off in irons, though. A contender for the most forgettable Hitchcock talkie.