Nothing is ever hidden from the Thought Police. 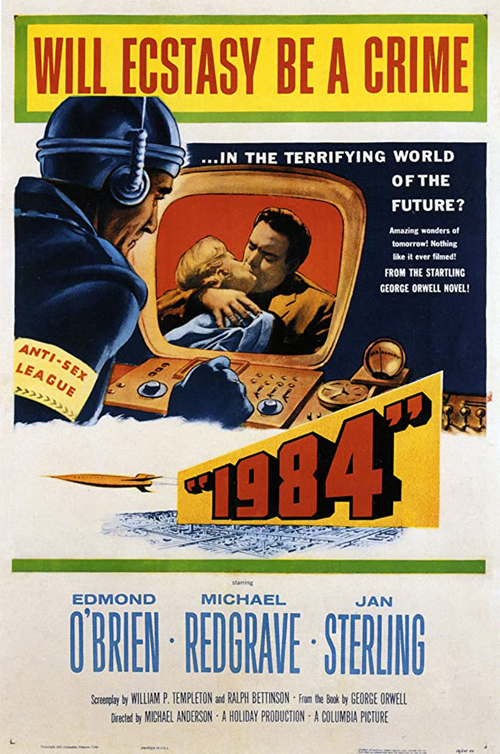 1984
(1956)
(SPOILERS) Michael Anderson’s 1984 was released in the same year as his big shot at Oscar glory, Around the World in 80 Days (it won Best Picture, but Anderson, never exactly an auteur, missed out). It’s a close-run thing as to which adaptation is more lightweight. Anderson’s dystopian vision, “freely adapted from the novel by George Orwell” by William Templeton (he also wrote the Studio One teleplay three years earlier) and Ralph Gilbert Bettison, tends to the dreary rather than the terrifying, and its impact is further diminished by a couple of sore thumb leads.

Narration: This is a story of the future – not the future of spaceships and men from other planets – but the immediate future.

Well, Jan Sterling is “okay” as Julia but much too striking to bear any resemblance to her novel counterpart. Edmond O’Brien is particularly unsuitable as Winston Smith, though. Dorian Lynskey comment of the “two badly miscast (and inexplicably American) leads” and in O’ Brien’s case, more than half a decade on from D.O.A., this extremely well-nourished Outer Party member isn’t really sending the right signals about this oppressive society. In appearance, he’s more an American Tony Hancock than the borderline-malnourished figure conjured by John Hurt.

While the picture admits to its free adaptation, the issues are more those of tone than specific content. There’s a constantly-observing eye (that Smith frequently converses with when asked what he’s up to), quite memorably visualised as an alien kind of apparatus, but Anderson’s regime lacks the necessary intimidating air, claustrophobia and tension. That said, when it comes to sending the now captured Smith to the Ministry of Love, the sequence is reasonably well conveyed, with the 2+2=5 logic retained and thought having gone into the depiction of his processing (Smith is shown on a large screen, Michael Redgrave’s O’Connor in the foreground, with the choice to have the latter uncomfortable, sweaty, popping pills). True, there’s no sign of emaciation in Smith, and he still has his hair, teeth and quantitative girth – when he can’t recognise himself in a mirror it appears to be more because of a show of stubble than the deleterious effects of torture – but on the other hand, there is something effective about the Hollywood guy being left bereft.

Lynskey reports how Anderson shot two different endings, and that “British viewers were surprised to see Winston and Julia defiantly crying ‘Down with Big Brother!’ before being gunned down”. It was a mark of its “uncommon bleakness” that this was seen as a happy ending; the version I saw on YouTube was the American one, which retains the gist of Orwell, his reunion with Julia coming to nothing as he is distracted by the news screen and joins in the rallying cries of “Long live Big Brother!”

More damaging is the trad-romance between Smith and Julia (“We can even touch each other if we want to”) as they indulge in Post-coital (but fully clothed) countryside cigarettes. Generally, it’s just interesting to see what has been preserved and omitted. There’s little clarification of proles/people, which is probably for the best. Winston still finds poetry in the washerwoman, but now it comes with Julia announcing “I’d like to have a child”. Which may go some way to explain the truncated conversation with O’Connor (changed from O’Brien because of the leading man) concerning what they would be willing to do. There’s no mention of throwing acid in a child’s face. And in a sign of the lack of nuance, the toast is simply “Down with Big Brother” (rather than “To the past”). There’s also specificity rather than murk in the history: in 1965, three police states rose to divide the world (and the picture opens with the recognisable signifier of a gloomy future that is the atom bomb).

Generally, I think Redgrave, as composed as he is, lacks the necessary steel once O’Brien shows his true colours (he also has a much too luxuriant gaffe; generally, there are signs of futurism here, such as pine cone buildings, that are absent from the novel). There’s clearly intention to make him less resolved than his counterpart on the page (the aforementioned interrogation), but the result adds to the feeling that all of this is rather tepid.

For every nicely translated element (“I revise history” states Smith unsubtly; he is informed that “rectify” is a more suitable term) there’s another that blunders (“It’s the thing I really hate! The one thing I’m really afraid of!” he screams of a rat, telegraphing his future Room 101 encounter). Donald Pleasance returns to 1984, but this time as Parsons (shopped by his daughter). Although, he’s something of an amalgam, since Syme is entirely absent. An uncredited Pat Troughton appears briefly on a giant TV screen.

Narration: It could be the story of our children, if we fail to preserve the heritage of our freedom. This then is a story of the future.

Lynskey refers to the advice given for the making of the movie by Sol Stein of the American Committee for Cultural Freedom, that “this presents a situation without hope when, in actuality, there is some hope… that human nature cannot be changed by totalitarianism and that both love and nature can survive even the horrendous encroachments of Big Brother”.

In actuality, Big Brother may simply have found less overt methods to placate its subjects with a view to horrendous encroachments on liberty of thought and deed. Certainly, the “portentous voiceover” Lynskey mocked a few years ago in The Ministry of Truth currently seems entirely reasonable. 1984 didn’t do very well (Sonia Orwell disowned it, or at least the British version, but what did she really expect?) and probably isn’t on most people’s radar as adaptations of the novel go. It isn’t a disaster, but too it frequently tends to the compromised and enfeebled. A good adaptation should at least unsettle the viewer. This one resolutely fails to do that.