Two Minutes Hate can be quite exhausting. 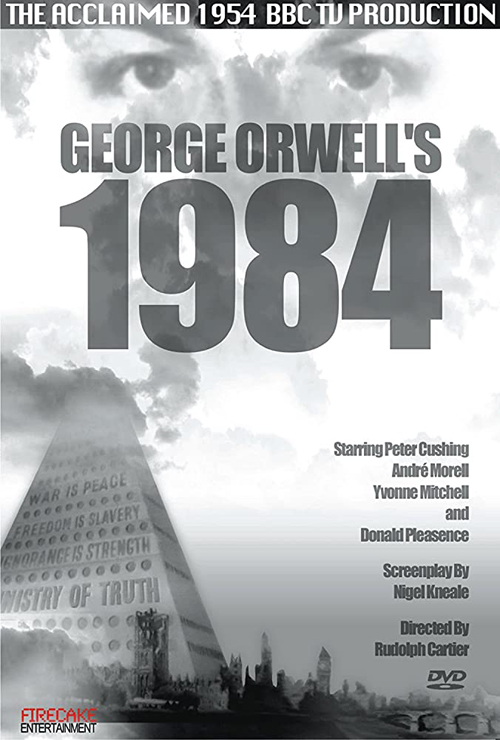 BBC Sunday-Night Theatre: 1984
(1954)
(SPOILERS) The BBC’s relatively quick-off-the-marks adaptation – just not as quick as Studio One in Hollywood’s – of Orwell’s novel roused some vitriolic responses at the time. It’s hailed by many as still the best screen version of 1984. Coming to it soon after a read of Nineteen Eighty-Four, however, I found it generally lacking, despite being buoyed by several strong performances and a diligent approach from Nigel Kneale.

As told by Dorian Lynskey in The Ministry of Truth, this version’s broadcast led to hundreds of viewers complaining to the Beeb about its “unusual amount of sex and violence”, abusive calls to Cushing, death threats to director Rudolph Cartier and the Daily Express headline “A Million NIGHTMARES”. It also saw a huge increase in sales of the novel, a Goon Show parody (Nineteen Eighty-Five) and “reinforced the novel’s political importance” albeit it was commonly misinterpreted as “anti-socialist propaganda”.

Cushing is suitably gaunt and earnest as Winston Smith, Andre Morell benign then intractable as O’Brien, and Donald Pleasance an appropriately waffling bore as Syme. Yvonne Mitchell fares less well, unable to access Julia’s more carnal qualities with the consequence that she is left simpering. Also notable are Leonard Sachs as Mr Charrington, the prole shopkeeper who eventually reveals himself as nothing of the sort, and Wilfrid Brambell in dual roles as an old prole and a prisoner (Brambell was barely forty; like Clive Dunn, he made a name for himself playing significantly older than his age).

With the distance the camera lends, the impersonality of Winston’s fate seems all the more inevitable here, manoeuvred into a date with the Ministry of Love; it’s his destiny. If that aspect is effective, much else here is not. This is a BBC production, one lacking the necessary grimness and grime of the novel’s decaying infrastructure. Big Brother looks more like Doctor Watson than a force of… anything much, really. The berets worn by the Outer Party don’t help matters either. And with such lapses, the novel’s sustained tension and oppression dissipate. The sense of escalation accompanying Winston’s path is abrupt and truncated, such that the interrogation lacks real punch. No sooner have he and Julia used the shopkeeper’s spare room than they are captured (“You are the dead”), and the horrors of the Ministry of Love and Room 101 are necessarily softened. Essentially, this is very much Sunday night theatre with the emphasis on “theatre”.

Within those limitations, however, the production is still dramatically engaging. The populist pedigree of Cartier and Kneale carries across from the previous year’s The Quatermass Experiment, ensuring this isn’t stolid and lifeless the way much TV of that era can now appear. Kneale’s additions to Orwell have a frequently humorous touch (“You do know a lot, don’t you – about our sink?” accuses his neighbour’s vicious little daughter when Winston goes to help unclog the kitchen sink; "Victory gin does not improve the palate" attests O'Brien).

Also amplified by the softness of this version, Winston’s professed dedication to the resistance cause sounds even less convincing than on the page (that he would throw “sulphuric acid in a child’s face”). It underlines that his volunteering for any act desired of him is a little too neat, designed precisely in order that it should serve a retrospective function when it comes time for his own values to be torn down.

In the Nineteen Eighty-Four rankings, this version may be merely adequate, but it still comes in a comfortable second place.