He has enough trouble being a single agent. 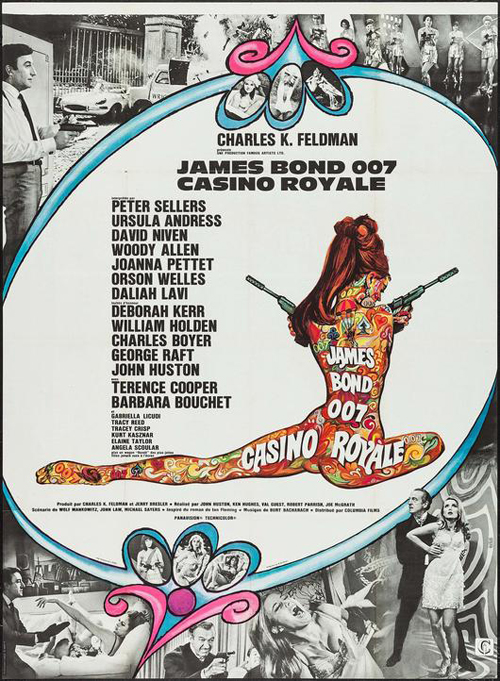 Casino Royale
(1967)
(SPOILERS) I had assumed, wrongly, that Casino Royale was a massive flop. It was massively expensive, but proved – surprisingly – a reasonably sized hit. Perhaps because this kind of unwieldy, overblown sprawl had become fairly familiar by this point in the 60s; the public knew, and presumably liked, a big mess when they saw one. It’s a movie I suspect few stick with for the duration when it’s on TV, and for good reason, as it entirely fails to grip and has no plot to speak of, by dint of production circumstance. But in its own way, this original movie version of Casino Royale is quite likeable. And one positive is unarguable: Burt Bacharach’s score is a triumph (and regarding Talk to the Animals beating The Look of Love to an Oscar; well, it tells you what you need to know about the authenticity of the Academy).

It’s also safe to say that Ian Fleming was right, and David Niven would have been a perfect James Bond. Niven was a hasty addition to the cast when Peter Sellers’ appalling behaviour saw him being let go; there was a scramble to make some vestige of sense from the footage shot. Thus, Val Guest put together linking material with Sir James Bond, and it works to the extent that this feels much more like Niven’s movie than Sellers’. Indeed, if there were more Niven and Woody Allen to fill the gaps, you could comfortably remove Sellers from the entire thing and not feel very hard done by at all.

Piper (Peter O’Toole): Excuse me, are you Richard Burton?
Evelyn Tremble: No, I’m Peter O’Toole.
Piper: Then you’re the finest man who ever breathed.

Producer Charles K Feldman opted to make a parody because he didn’t think it would be possible to compete with the official series (there were talks, it seems, of a collaboration with Eon, but this fell through). It’s said that Sellers, as deluded as ever, was keen to make a straight version, the evidence of this being that his Evelyn Tremble/Bond scenes and with Le Chiffre (Orson Welles) pretty much follow the novel. On the other hand, you’d expect that, loosely, in a parody.

Sellers’ performance is mostly a lot of nothing. Tremble, a gambler employed to play Le Chifffre, shows up properly after three quarters of an hour and shares scenes with a nondescript Vesper Lynd (Ursula Andress), during which he dresses as Hitler, Napoleon and Toulouse-Lautrec. He is then nearly seduced by a young Jaqueline Bisset (as Miss Goodthighs), refuses to share the screen with Welles (Sellers was intimidated and concerned about being upstaged, it seems) and experiences a psychedelic torture when finally captured. Oh, and star cameos. Before ending up in heaven. The best part of his scenes are Welles’ magic tricks. So yes, he was upstaged.

Doubtless, Sellers’ star appeal and the investment forked out meant Feldman had no intention of ditching the Tremble footage entirely, but the consequence is the entirely inept linking material; the remainder of the picture is supported by Sir James Bond, Mata Bond (a game Joanna Pettet) and, at the end, Jimmy Bond (Allen). All this with a stew of five credited directors – Ken Hughes, John Huston, Joseph McGrath, Robert Parrish, Val Guest – and an uncredited Richard Talmadge.

Much of the Niven subplot – they’re all subplots – is pretty feeble in design, as his Bond is forced out of retirement and must return the remains of M (an inadvisably self-cast Huston, who had envisaged Robert Morley) to Scotland. But Niven being Niven, he keeps this celibate highly-capable “elder” Bond – well, Niven was only five years older than Daniel Craig is now – watchable, as Deborah Kerr’s Agent Mimi/ Lady Fiona McTarry and her harem attempt to “ruin” him. Sequences such as the challenge to wassail and the grouse shoot work reasonably well. Derek Nimmo cameos. Barbara Bouchet makes for easily the most delectable (daughter of) Moneypenny. Generally, Niven lends the picture a much-needed air of class.

It’s so long since I last saw Casino Royale, I’d pretty much forgotten Pettet’s role, and I’m not really familiar with her body of work (she reminds me a little of Blake Lively). She’s engaging throughout, though, and there’s some amusement to be had at the “art auction” of comprising photos of military leaders. After all, we see Richard Wattis being very English, and Burt Kwouk offering “Seventy million tonnes of rice!”

Sir James Bond: I never should have let Nelly send him to progressive school.

There’s nothing really to “follow” in terms of story, as the progress from scene to scene is virtually random. So when Mata is kidnapped by SMERSH in a UFO and taken to Dr Noah’s lair, replete with all-seeing eye designs, it isn’t particularly phasing. Allen, at a point in his career when his purpose was strictly to entertain, is a breath of fresh air; the movie is comedically energised for the first time. There are actual laughs (earlier he got in a “Listen, you can’t shoot me. I have a very low threshold of death”). Jimmy’s plan is a hoot too: “The germ when distributed will make all women beautiful and destroy all men over four foot six”. It certainly makes more sense than the current one professed to be “on the loose”.

Of course, the picture then throws up its hands in favour of a “madcap” finale replete with explosions, Allen hiccupping atomic time pills, Jean-Paul Belmondo and Mel Brooks-esque cowboys and Indians (along with George Raft and William Holden). Nevertheless, I’d rather watch this Casino Royale than at least four or five entries in the canonical series. It’s random, sometimes dull, entirely lacking in spine, but it’s also more than willing to flaunt its era, it frequently looks as expensive as it was, and it features a string of memorable performances and cameos (others I haven’t mentioned: Bernard Cribbins, Ronnie Corbet as Dirk Bogarde, Geoffrey Bayldon and Anna Quayle). 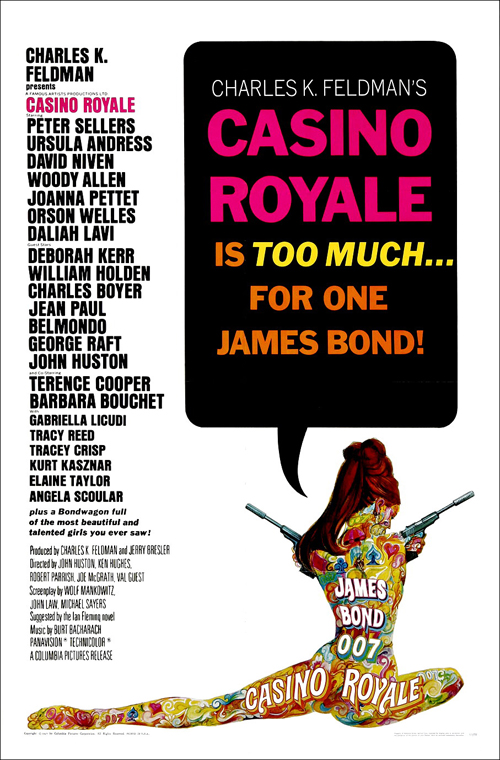 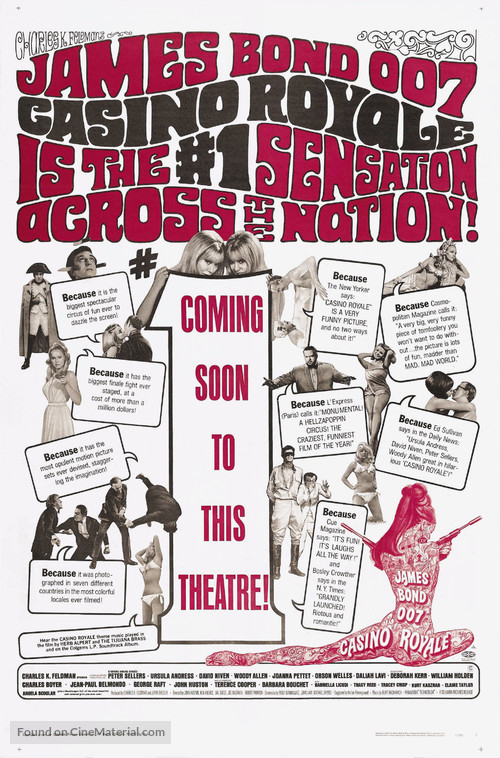