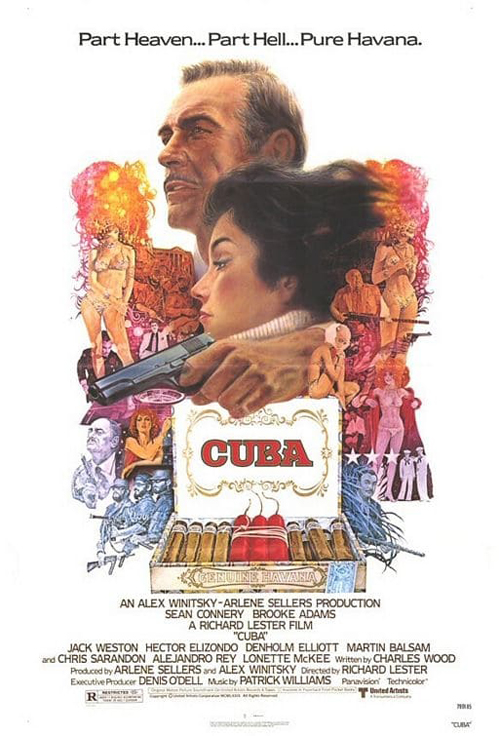 Cuba
(1979)
(SPOILERS) Cuba-based movies don’t have a great track record at the box office, unless Bad Boys II counts. I guess The Godfather Part II does qualify. Steven Soderbergh, who could later speak to box office bombs revolving around Castro’s revolution, called Richard Lester’s Cuba fascinating but flawed. Which is generous of him.
Soderbergh particularly rated its “refusal to play to the idea of a war-torn romance. An absolute refusal to be sentimental or easy about anything”. But an area he cites as bucking trends is really symptomatic of a movie that doesn’t know what it wants to be. At any rate, if Charles Wood knew when writing the screenplay, it didn’t translate to Richard Lester when he was directing it. Soderbergh’s take is that viewers didn’t like the romance plotline, but viewers simply weren’t interested full stop.
Lester’s idea was to “portray an impression of the moment one regime was replaced by the next”, and there are elements that succeed in this regard. But they fail to coalesce in the way great movies with multiple plot strands do. Most successful is probably Chris Sarandon’s alcoholic, profligate son of Walter Gottell’s (alias General Gogol) rum and cigar factory owner (that’s original). There’s a young punk rebel out to kill him (and later Sean). Denholm Elliot’s a smuggler, but his inclusion only ever feels like an afterthought. Jack Weston’s curiously named Gutman is interested in investing in the factory. Martin Balsam is the delusional general, Hector Elizondo (looking very young) his sympathetic and smarter captain.
And marching through all this, with absolutely nothing dynamic to do, is Sean Connery. Ostensibly, his mercenary and former major Robert Dapes has been brought in to train the Cuban army, but he’s (a) too late and (b) spends most of the proceedings standing around like a lemon, or growling at Brooke Adams for spurning his advances. She’s Sarandon’s husband and an old flame of Connery’s. Or should that be young flame (“I was a silly girl of fifteen” she tells him of her first meeting. It’s alright, though; Sean thought she was seventeen).
The main reason this fizzles isn’t due to the anti-romance nature of Cuba; it’s that there’s zero chemistry between the two of them, and Adams just isn’t lead material. Sean’s baffled by it all. So are we. You kind of understand why Sarandon (who is terrific) is getting pissed all the time.
Does Cuba reveal much about revolutions or more specifically this one? It offers superficial snapshots of why the revolt is taking place, of corrupt police with (literal) suitcases full of money, but for a movie accused of being pro-the revolution, it’s remarkably slack about giving this side any weight. There's the occasional glib slice of wisdom ("You'll only defeat someone like Castro if you're right") which only adds to the feeling Lester's lens is very peripheral, even towards the central characters. Nothing ends up suggestive of substance or insight; even the escalation, as various folks attempt to flee, lacks much in the way of suspense. Sean gets in a tank. And then he gets out of it again. His best moments are some earlier put-downs of the general he’s there to help (for a pronounced mercenary, he seems to do everything he can not to get paid).
Also notable for Roger Lloyd-Pack and David Rappaport, both as Cubans, Cuba represented something of a nadir for Connery’s 70s, a rough patch as persistent as pal Michael Caine’s (although, in both cases, there are glittering jewels in there too). He was about to turn the corner. As was Lester, with the Salkinds coming calling once again. This time to take over Superman II.