Now, are you sure you want to have a fight? Because I’m only going to use my thumb. 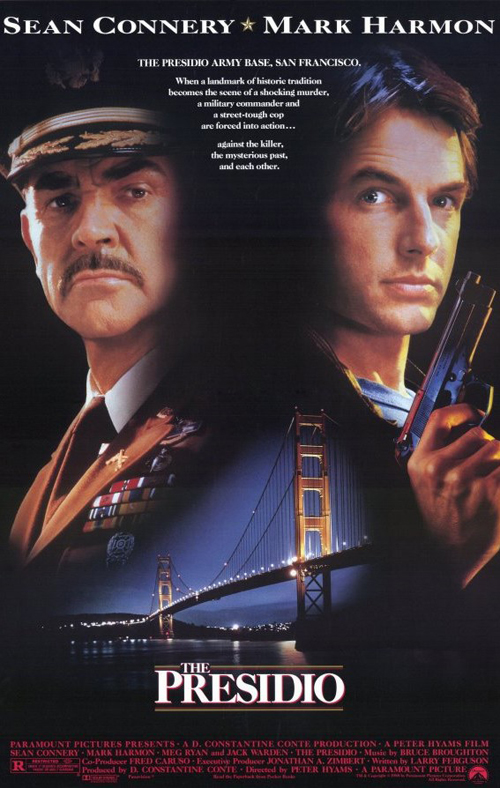 The Presidio
(1988)
(SPOILERS) “Shit on a shtick” exclaims Sean Connery (RIP) at one point during The Presidio. That was probably also his reaction on learning Mark Harmon was to be his co-star (it seems Kevin Costner dropped out, and then Don Johnson couldn’t catch a break from Miami Vice. You know, manly male types Sean might have vibed with). Much as it would be nice to dispute the prevailing view (“I suppose Harmon could have been stronger” was Sean’s verdict), Connery’s co-star is the weak link here. But even if this had ended up as a reteam for Costner and Connery, I doubt The Presidio would have been a keeper.

That’s down to a very average Larry Ferguson screenplay, one that encourages director Peter Hyams’ most generic impulses rather than inspiring him to turn in a quality journeyman affair (as his previous collaboration with Connery, Outland, turned out to be). In the vein of the later likes of A Few Good Men and The General’s Daughter, there’s a murder investigation focused an army base, the San Francisco Presidio of the title. Aliens’ Jenette Goldstein has been killed, and Harmon’s former MP Austin, now a police detective, is called in, reluctantly collaborating with Connery’s Lieutenant Colonel Caldwell.

There’s bad blood between them because hot head Harmon beat up a colonel on Connery’s watch; he subsequently left the army after getting busted down a stripe. Nevertheless, as is always the case with these things, the at-loggerheads duo gradually develop a grudging respect for each other. This despite Harmon embarking on an affair with Connery’s daughter Meg Ryan (herself keen on provoking daddy; she first encounters Harmon in a braless top).

In part then, The Presidio’s problems derive from there being no bite to Harmon’s bland performance. Which means there’s no energy to his friction with Connery. Which also means the picture spends significant time on a romance that fails to pay off (doubtless Paramount had one eye on the military formula that paid off for them so resoundingly with Top Gun, along with the ex-services vibe of Lethal Weapon). Connery and Ryan work well together, and Connery and Jack Warden, the latter as the retired sergeant major who saved his life, work even better, a couple of old pros hitting an easy chemistry ("I should have left your worthless Scotch ass in the jungle").

But the investigation itself is a fizzle. There’s no hard graft involved, with clues dropping in our heroes’ laps; it turns out the bad guys are smuggling diamonds in water bottles. Those bad guys (Mark Blum’s ex-CIA entrepreneur, Dana Gladstone’s colonel) are quite forgettable – inevitably, whatever disrepute the armed forces fall into represents only a few bad apples – and the reveal that Warden is involved leads to ungainly exposition in which he’s effectively exonerated (he still has to die, of course, in a pretty rubbish shootout climax in a bottling factory, complete with Harmon killing Blum as the former rides a conveyor belt).

The picture’s keen on exactly those kinds of very 80s tropes (Ryan ravishes Harmon on her car before retreating to a fireside rug), but they’re all ones its borrowing rather than inventing, and it shows. Bruce Broughton’s score is forgettably synth heavy. Connery is serviced with an enjoyable grandstanding scene where he beats up an uncouth bar hound with only his thumb (actually, he also trips the guy up, so he cheats a bit). It’s The Presidio’s one claim to fame with regard to anything memorable.

Still, Harmon aside (let’s face it, the small screen suited him better, as NCIS evidenced), it’s interesting to note the picture as the first fruit of Connery’s post-The Untouchables career phase. This might not have been a prestigious example, but the paternal figure he’d tested out in his last few roles (Highlander, The Name of the Rose), would soon lead to more consistent box office. It also represented Ryan’s final girlfriend trophy part before When Harry Met Sally established her as a lead in her own right. Whatever The Presidio’s faults, they can’t be said to lie with either Connery or Ryan. 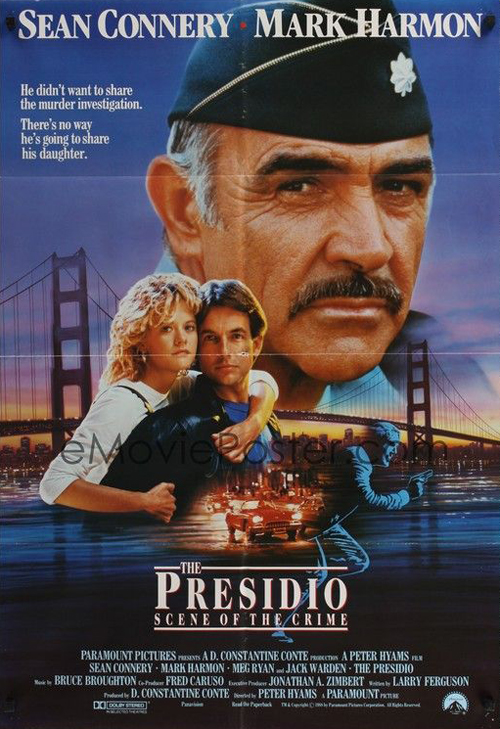 I always think of my murderers as my heroes.

April 29, 2021
Alfred Hitchcock Ranked: 52-27 The all-time most renowned director? It’s probably a toss-up with the Beard, although really, the latter’s nothing but a small-fry pretender who went off the boil quite early on. Hitch’s zenith may vary according to your tastes – anywhere from the mid-1930s to about 1960 makes for an entirely reasonable pick – but he offers so much choice, there’s more than likely something for everyone in there. The following, since I’m relatively youthful and/or don’t have a top-secret archive of rare and lost features, does not include his second film, 1926’s The Mountain Eagle , but everything else finds a placing. With the majority of the silent era, I was discovering them for the first time, and I’m unable to report there were any revelations during that period of his finding his feet and stylistic personality. Surprises elsewhere? I dare say there are a few, albeit more so for those I don’t rate highly than those I do. So sit back, enjoy, and maybe have a glass o
Post a comment
Read more