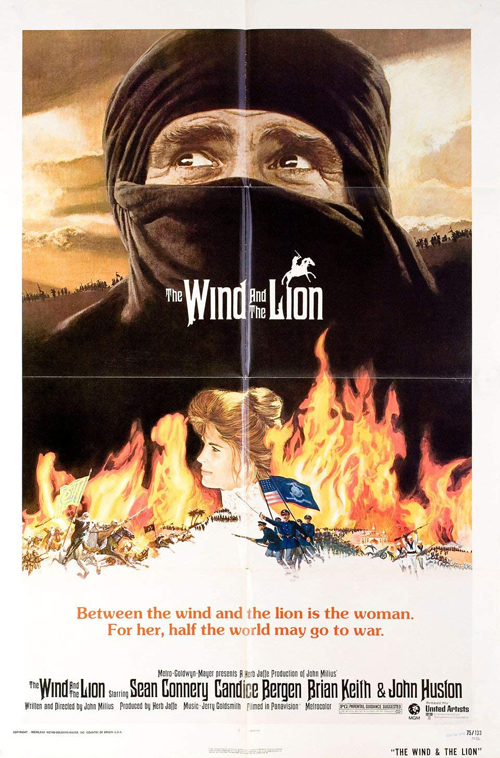 The Wind and the Lion
(1975)
(SPOILERS) John Milius called his second feature a boy’s-own adventure, on the basis of the not-so-terrified responses of one of those kidnapped by Sean Connery’s Arab Raisuli. Really, he could have been referring to himself, in all his cigar-chomping, gun-toting reactionary glory, dreaming of the days of real heroes. The Wind and the Lion rather had its thunder stolen by Jaws on release, and it’s easy to see why. As polished as the picture is, and simultaneously broad-stroke and self-aware in its politics, it’s very definitely a throwback to the pictures of yesteryear. Only without the finger-on-the-pulse contemporaneity of execution that would make Spielberg and Lucas’ genre dives so memorable in a few short years’ time.

If Connery seems unlikely casting – Omar Shariff turned the part down, obviously; Anthony Quinn was also considered – he must have thought he was onto something in terms of Middle Eastern grooves, as he then played a Saudi Arabian in the following year’s The Next Man. Connery’s as appealingly, ruggedly Scottish as the leader of a band of Berbers as he would be playing a very Scottish Spanish/Egyptian peacock in Highlander a decade later (Nadim Sawalha apparently had to give up in his attempts at teaching Connery an Arabic accent). Indeed, it’s his presence that really fuels the picture’s watchability. Which it needs to, since the back end turns on the not-Stockholm-Syndrome-really feelings of his former captives when he himself is held prisoner.

But Connery’s “lion”, opting to kidnap women and children because he discovers he has little recourse if he is to garner attention in an age where combatants no longer look each other in the eye while fighting – a very Milius, “When men were men” sentiment – is only half of the movie. The picture is loosely inspired by the 1904 Perdicaris affair, which saw President Roosevelt intervene in a kidnapping case in Morocco, a decision regarded as having helped with his re-election (Milius out-and-out makes it a canny publicity stunt on Roosevelt’s part, and let’s face it, short of actually vote-rigging, it’s a tried-and-tested formula).

Brian Keith’s Roosevelt is all-man, shootin’ and admirin’ stuffed bears: a man after Milius’ heart. But perhaps because the writer-director is clearly so in awe of the guy (who in turn develops respect for Raisuli) this plotline never feels as if it’s making fulfilling its potential. John Huston is good value as Secretary of State John Hay, but Huston always is. The President sends in the South Atlantic Squadron, must deal with a slippery sultan (Marc Zuber) and Raisuli’s brother the Bashaw (Vladek Sheybal). When there’s a betrayal, and Raisuli is captured by the Germans and Moroccans having been promised he will be unharmed, the Americans end up fighting the Germans, represented by Von Roerkel (most famous as the egg-sucking German tank commander in A Fistful of Dynamite).

This coming in a film where Roosevelt’s staff speculate “A world war. Now that would be something to go out on”. Making Milius’ comment, for all his flag-waving, that “You can take the politics to be any way you want, for or against the United States” actually quite reasonable. He’s clearly an interventionist, but his depictions are not without a sense of humour, as the final letter to Roosevelt suggests (“I like the lion must remain in my place, while you, like the wind, will never know yours”).

In his original conception, Milius wanted Katherine Hepburn for the kidnapped grandmother, changing this to younger mum Eden Pedecaris in order to get financing. He had Julie Christie in mind, but had to settle for Faye Dunaway, who then dropped out and was replaced by Candice Bergen. Bergen’s fine, but she doesn’t especially stand out (Milius opined that her range was limited and she was only concerned with how she looked. He also called Connery “sour and dour” but liked his performance; the feeling was sufficiently mutual that Sean brought Milius in for script doctoring duties on The Hunt for Red October). The director clearly enjoyed having Eden’s children (Simon Harrison and Polly Gottesman) see this as a grand adventure, complete with beheadings (“I had to kill those two or I could not trust the other two” explains Raisuli), cut-out tongues and ensuring swords have blood on them for appearances’ sake; Raisuli takes on the status of father figure, one who never had any intention of killing women and children.

Jerry Goldsmith provides the picture with a suitably rich, expansive (and Oscar-nominated) score, while Billy Williams’ cinematography brings the hoped-for Lawrence of Arabia vibe. That film had a much more persuasive screenplay, though, and commanding lead character. The Wind and the Lion is unable to fully embrace that boy’s own vibe, because the overgrown boy calling the shots ultimately gets in its way.