I don’t know if we should leave, but I would definitely advise skipping the fish course. 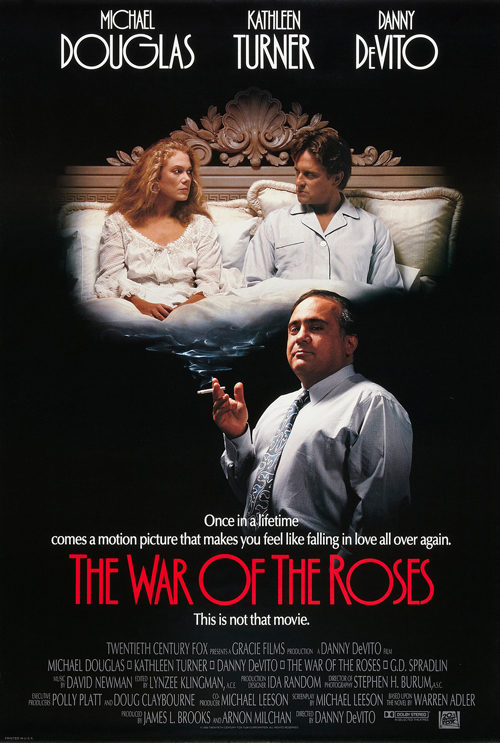 The War of the Roses
(1989)
(SPOILERS) Danny DeVito’s ruthless black comedy is an evergreen. Based on Warren Adler’s 1981 novel of the same name – Adler’s Random Hearts was later adapted much less successfully – it finds the director using audience familiarity with Michael Douglas, Kathleen Turner and himself to sell a very different prospect to the Indy-riffing Romancing the Stone. The War of the Roses certainly wasn’t guaranteed to become the hit it did, but it’s uncompromising freshness, and its offbeat seasonality (it was released in December in the US, with an accompanying 12 Days of Christmas-riffing trailer), hit a nerve with audiences.

Much of the credit for this is down to DeVito, who favours a heightened, sometimes cartoonish style. You’ll see the use of split diopter here, courtesy of cinematographer Stephen H Burum and a reliance on punchline reaction shots, as well as a comic style that wouldn’t be out of place in a John Hughes movie. Or a Warner Bros cartoon (the scene where, after being delicately injured, Douglas’ Oliver Rose is pushed out of the loft hatch by Turner’s Barbara Rose, is pure slapstick). Even the opening credits shot is a macro one, of the sort then recently seen in Innerspace, as the camera pulls back from DeVito’s handkerchief.

But the movie’s success is also heavily to do with its stars. Trevor Willsmer in The Film Yearbook Volume 9 speculated over how much of the antagonistic energy directed at Oliver by Barbara was genuine on Turner’s part. After all, she just been sued into making The Jewel of the Nile by her co-star, and he was being paid many times her fee for this picture.

If there was any of that in the mix, it nevertheless has to be recognised that Oliver Rose is not the kind of part an egomaniacal star embraces. Indeed, in context, The War of the Roses is merely the most extreme and unstinting of the Douglas brand of flawed males that began with Fatal Attraction and would continue through much of the 90s. Here, though, there’s really very little at all that’s likeable about Oliver, and Douglas gleefully plays up his deficiencies, his blinkeredness and self-centredness. He doesn’t want a divorce, has no capacity to identify with his wife’s position and takes the pettiest approach to every situation when it’s abundantly clear there’s no rescuing their relationship. And yet, he still professes to love her.

In concert, DeVito and Turner make sure Oliver’s irritating qualities – in particular, his assumption that he’s always right, that “phoney laugh” and his sitting at the opposite end of a long dining table smirking and talking to himself as he wolfs down his dinner – are writ large for all to see. He revels in his self-conceived role as breadwinner, mocks Barbara’s desire to start her own business (“You sold liver to our friends?”) and uses the contract he’s promised to read as a fly swat.

DeVito allows the small and not-so-small irritations to fester with enough ghoulish emphasis that, by the time things break – she doesn’t turn up to hospital when it turns out he isn’t dying at all (he has a hiatal hernia, rather than a heart attack) – there’s no room left for rationality and civility. Hence, DeVito’s lawyer Gavin’s framing device of a cautionary tale: that it’s best just to persevere and look on the bright side, because the alternative will be much worse. Oliver’s “Go on then, smash my face in!” gets a literal response he didn’t expect, and from there, it isn’t long until they have divided up the house into zones (“I’ve got more square footage” gloats Oliver to a bewildered Gavin: “This seems rational to both of you?”)

Barbara comes out better in this mess simply because she only stoops to pettiness when Oliver’s already been childish or inconsiderate. Which is most of the time. His volunteering her for an anecdote at a meal with his boss, then telling it for her when she starts rambling, elicits an entirely understandable “Fuck face!” But Barbara is quite capable of living in her own flawed bubble (“I don’t think it’s a good idea to give them sweets like that” warns Oliver; the next time we see their children, they have ballooned).

When escalation reaches a certain point, she drives over his car and ignites the final fatal fight by leading him to believe his pet pooch is in the pâté – “A good dog to the last bite” – after he accidentally ran over her cat. Admittedly, he did earlier ruin an important evening for her potential clients by pissing on the fish. By the time it’s over, they’re both equal and opposites, except that Oliver is more weaselly and comes out worse in any altercation.

The manner in which The War of the Roses was completely ignored by the Academy was noted at the time. Perhaps its sensibility was too brazenly bleak for Oscar to appreciate the quality of writing and performances (and direction); BAFTA did give it a screenplay nod. Thirty-plus years on, the observational humour remains as sharp as ever; it’s a shame DeVito the director didn’t manage to make good on his first two features’ promise. He largely continued with black comedies, but only Matilda met with any kind of comparable success.