I never drink while emancipating! 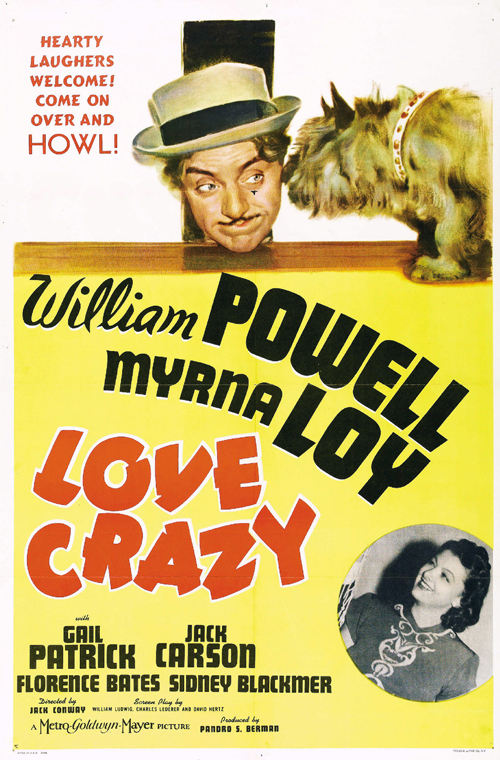 Love Crazy
(1941)
(SPOILERS) William Powell and Myrna Loy made so many films together that The Thin Man series doesn’t even make up half of them. They’d already been teaming for the best part of a decade when they collaborated on this farce, one that, if it’s very much arranged for Powell to take the lion’s share of the funny business, still grants Loy some choice scenes.

Steve (Powell) and Susan Ireland’s (Loy) fourth wedding anniversary is interrupted by the arrival of Susan’s mother (Florence Bates, on superbly irritating form). She proceeds to sprain her ankle and drive Steve up the wall. In order to get away, he succumbs to the urge to meet up with neighbour and old girlfriend Isobel (Gail Patrick). Unfortunately, when Susan finds out, she adds two and two together and comes up with a divorce. So far so par for the farcical course. Then, however, Steve’s lawyer (Sidney Blackmer) has the bright idea of enabling the postponement of separation proceedings – so Susan can come to her senses – by having Steve pretend he’s mad. He is eventually committed, but not into Susan’s care, as he hoped. Instead he ends up in a sanatorium.

There’s much miscommunication and misunderstanding subsequent to the initial one. Susan, attempting to teach Steve a lesson, intends to suggest she and Isobel’s husband (Donald McBride) have something going on. However, she winds up in the wrong apartment, so attracting the attentions of world champion archer Ward Willoughby (Jack Carson). Who proceeds to pursue her for the rest of the movie (he in turn, is periodically foiled by Steve, engineering the suggestion that Ward too is a lunatic).

Come the climax, the farcical element is in full glorious flow, as Steve, escaped from the sanatorium and with the police after him, poses as his own sister. A rich ruse that enables him to insult his mother-in-law and repeatedly slap Willoughby across the face, while Susan, now aware that this is all one big misunderstanding between them, attempts to distract attention from his unravelling breast.

It goes without saying the Powell and Loy have irresistible chemistry, although the nature of this one finds them separated for long periods. Director Jack Conway ensures the broad nature of the comedy lands effectively, in particular a lift sequence during which Steve’s head is wedged in the doors while the departing elevator leaves him hanging. During another, he attempts to persuade partygoers he is mad by stealing top hats and setting them free in a pond (before doing the same to the mother-in-law) but they just think he’s drunk again. Perhaps not quite up there with the best Thin Mans, but a very serviceable outing for the duo.