If you're going to be rude to my daughter, you might at least take your hat off! 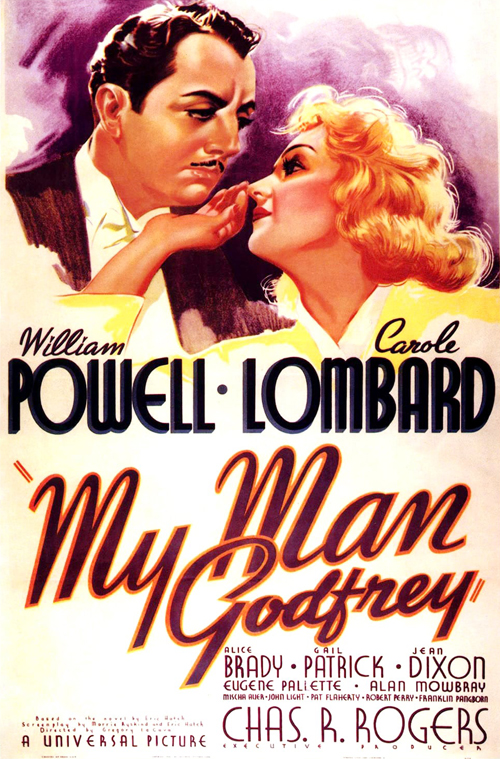 My Man Godfrey
(1936)
(SPOILERS) William Powell deserves more credit than he gets as one of the all-time most watchable movie stars. My Man Godfrey garnered him his second of three Best Actor nominations, teaming him (at his own behest) with ex-wife Carole Lombard. A hugely entertaining screwball comedy, it duly achieved the singular feat of being nominated for all four acting Oscars (of which it was the first), and writing and directing. But not Best Picture.

Notable, as this was a year with ten Best Picture nominees, many of which have faded into obscurity; Mr Deeds Goes to Town (which didn’t win), is probably the highest profile today, and Powell starred in another screwball that did get nominated, Libelled Lady. My Man Godfrey’s plot is typically high concept, whereby Lombard’s privileged socialite Irene Bullock employs Powell’s homeless Godfrey as a butler after enlisting him in a scavenger hunt where she has to find a “forgotten man”. Godfrey only agrees to present himself as a hunt item in order to put one over on Irene’s obnoxious sister Cornelia (Gail Patrick), and because “I was curious to see how a bunch of empty-headed nitwits conducted themselves” (the sisters’ mother Angelica, Alice Brady, is also part of the hunt, and has proudly procured a goat).

Presented with the job offer, he readily accepts, although the assumption that anyone untrained can buttle, something that would surely meet with Jeeves’ opprobrium, goes unchallenged. It’s clear from the outset that Irene, whom Lombard imbues with a marvellously woozy, breathless energy, is smitten with Godfrey. And that, being in a position calling for decorum and propriety, he will have to spurn the advances of the spirited girl (Irene is apparently supposed to be teenager, but one never gets the sense Lombard is playing less than she is, mid-twenties).

At the outset – as Pauline Kael also notes – there’s a feeling this might be intended as a satire on class and privilege, the poor seen as amusing curios by the wealthy. Maybe that was an element in Eric Hatch’s 1935 novel 1101 Park Avenue, on which My Man Godfrey is based and for which he receives a co-writing credit (along with sometime Marx Brothers writer Morrie Ryskind), but it quickly falls away. Still, there are nominal elements commenting on the fleetingness of amassing earthly possessions; Eugene Pallette’s patriarch Alexander Bullock loses all his money at the end, so it’s fortunate Godfrey had the vision to take precautionary measures. There’s also the rejuvenation of the down-at-heel; in a rather facile move, Godfrey turns the spot of his erstwhile homeless home Hooverville into The Dump, a nightclub, thus creating jobs and lodging for fifty people.

Things might have been different had there been an actual class element rather than a superficial nod to the same. We discover that Godfrey himself comes from a privileged background; a torrid love affair left him suicidal, only to discover a different outlook among the homeless. I can see why the revelation element was appealing (a man with a secret), but the actual motivation feels very thin. I even wondered if there was consideration to Godfrey having lost all his money in the Crash, but that might have been hewing a bit too close to reality.

Nevertheless, Powell traversing a household of nuts – aside from Alexander, who feels much the same way, and maid Molly (Jean Dixon) who is soon as smitten with Godfrey as Irene – offers pots of comedy gold. His chemistry with Lombard is fantastic (“He’s the first thing she’s shown any affection for since her Pomeranian died”), and his interactions with the various members of the household, in particular Brady as the batty mum and Cornelia oozing bile, are highly enjoyable. At one point, haughty Cornelia, assuming she can wrap him round her little finger, asks what he really thinks of her, and he calls her a Park Avenue brat. Which leads to Powell relishing a dive an elaborate drunk routine and Cornelia attempting to finger Godfrey for some stolen pearls.

The pleasure of this sort of movie is that every character has something interesting going on, even if it’s no more than peculiar quirks. Such as Angelica’s protégée Carlo, who is essentially there to stuff his face whenever he can and do an alarming gorilla impersonation. Director Gregory La Cava ensures My Man Godfrey is too light and frothy to carry a strong message, but Powell makes his delivery of the positives his stay with the family have given him count. And being a screwball, it makes sure that the guy is only in control so far; he’s too blinkered to admit to love, so it takes Lombard showing up at The Dump, minister in tow, to make him tie the knot.