Mrs Claus’s Village is the best place on Earth. 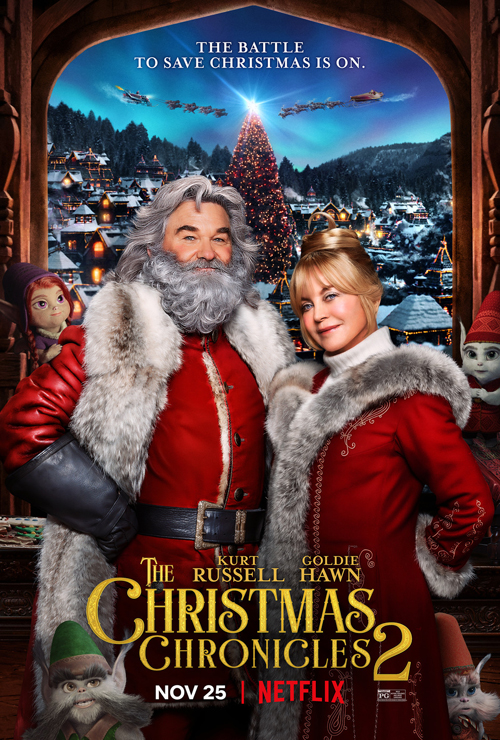 The Christmas Chronicles: Part Two
(2020)
(SPOILERS) Good grief. I came late to the Queen’s Gambit party over the last week, but it’s proof Netflix doesn’t always just serve up any old crap, expectant that its passive subscribers will gratefully receive. The Christmas Chronicles: Part Two, however, their highest-profile festive offering of the year, rather confirms every worst conclusion you’d reached about the service. A sequel to their – actually quite good – 2018 movie, they couldn’t just let such amiably innocuous fare lie. No, they had to churn out a grotesquely hollow, plastic-packaged Christmas bauble of a follow up. Somehow, it has garnered a 72% approval rating on Rotten Tomatoes, which if nothing else signals that civilisation as we know it has well and truly collapsed.

Overseeing this – not even really that treacly, more a facsimile of treacle that leaves no discernible gloopy mess on the consumer after the fact – yule log of whiffy proportions is none other than Chris Columbus, a veteran of fake emotive content and overblown, none-too-impressive effects pictures. The first two Harry Potters among them. Most recently, he was responsible for Pixels, a bomb that consigned him to half a decade in director jail. In turn, it appears to have sent him scurrying for that haven for moviemakers who can’t catch a break in the realm of now all-but-defunct big screen releases. He receives a co-writing credit with the one of the originators Matt Lieberman. Lieberman is also responsible for the screenplays for Scoob!, the upcoming lucky-it-likely-won’t-get-to-bomb-in-theatres NPC riff Free Guy and has a remake of Short Circuit in the works (doubtless minus the racist caricature Indian scientist. Or maybe not).

There’s a can’t-be-arsed plot in here somewhere, concerning angry elf Belsnickel – Julian Dennison, not exactly a worthy foe for Kurt Russell’s Saint Nick and inducing little more than faint irritation – attempting to cancel Christmas. Belsnickel is a bona fide folklore elf, it seems, but don’t expect any fidelity from this over robust, baseball-cap-clad delinquent. The other elves are a nightmare of a broken CGI and stale design. You’ll be hard pressed to decide which is faker, the elven hordes or Goldie’s face.

Yes, Mrs Kurt Russell has more than a cameo this time, and she’s broody for the kids they don’t have (meaning tykes Jack, Jahzir Bruno and Kate, the returning Darby Camp, prove welcome at the North Pole). Don’t worry, however, lest you are concerned the movie is destined to promote traditional gender roles. It turns out Mrs Claus designed Santa’s village but hasn’t received the credit. Yes, Santa is secretly a weasel. And when it comes to the antiseptic showdown between Santa and Belsnickel, she’s on hand to berate the boys for their childish game of chicken. Mostly, though, you’ll be wondering what would happen if all that Botox went off at the same time.

There’s a flashback to 312AD at one point, with a young Kurt looking much less convincing than in Guardians of the Galaxy Vol.2. Kate meets her dad as a child (Sunnny Suljic) when the picture contrives to detour into 1990. During which episode, Santa launches into a rip-roaring duet with Darlene Love that isn’t a patch on the original’s jailhouse rock. There’s also an extended subplot concerning elves, poisoned with elfbane, running riot. This allows Columbus to relive his Gremlins-scripting days. But really badly.

The Christmas Chronicles: Part Two has no vim or brio, and its attempts to deliver warm-hearted morals are facile in the extreme. There’s very little of Kimberly Williams-Paisley as mom, or of Judah Lewis as Teddy (which is a shame, as he has a natural comic touch the other kids lack). Tyrese Gibson is Williams-Paisley’s boyfriend, a straight man part that clearly illustrates he’s best off mugging frantically in Fast and Furious sequels. Even Kurt’s rugged charm rarely gets a chance to carry this along. There’s the occasional moment; when Belsnickel offers the opinion “Bah, humbug!” Nick scolds “You watch your mouth, young elf!” But mostly, this is coasts lazily on the first one’s goodwill and is resultantly sloppy on every level. I’d even advise watching Santa Claus: The Movie before Chronicles Two. At least John Lithgow does decent festive evil.