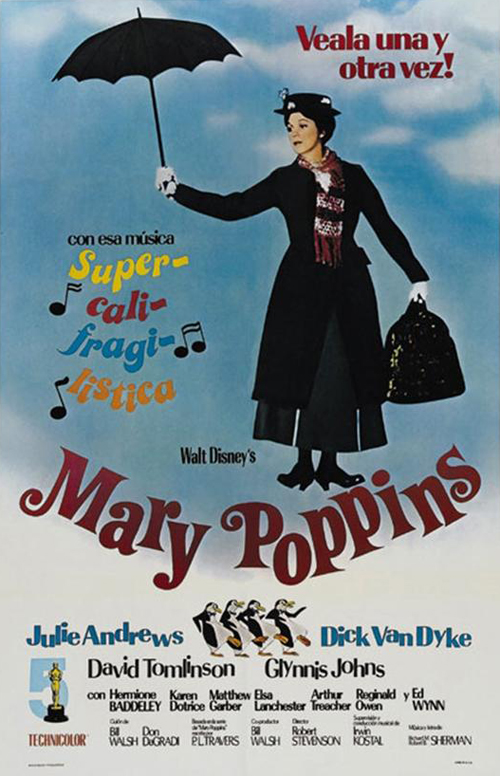 Mary Poppins
(1964)
(SPOILERS) Disney’s unimpeachable – unless you were an unimpressed PL Travers – smash hit, loved by children everywhere… Although, I don’t recall that I was ever that enamoured, preferring the similarly themed, just with an overtly identified witch and even wackier animation, Bednobs and Broomsticks (1971). Indeed, Bednobs and Broomsticks was in the running to be an earlier Disney production, when the rights negotiations for Mary Poppins were looking beyond Walt’s reach. Suffice to say, I don’t think my earlier position holds up. Even for one as jaded and cynical as I undoubtedly am – most of all towards the Mouse House – Mary Poppins is an irresistible affair, blessed with great tunes, dazzling choreography, some gorgeous cinematography and delightful performances. Even the eccentrically accented one.

I didn’t mention the director there, one Robert Stevenson, who doesn’t crop up on many lists of unsung auteurs. He was a Disney mainstay for almost two decades from the end of the 1950s. At which point, he’d come from a stint directing television. Before which he’d pursued a successful film career for two decades, the highlight probably being directing Orson Welles in the 1943 Jane Eyre. Stevenson’s Disney period saw him making movies into his 70s. These included the aforementioned Bednobs and Broomsticks, as well as the likes of The Love Bug (1968), The Absent-Minded Professor (1961), One of Our Dinosaurs is Missing (1975) and The Shaggy D.A. (1976). So prolific was he that in 1977 Variety cited him as “the most commercially successful director in the history of films” with no less than sixteen on their all-time rentals list.

As you can see from Mary Poppins, Stevenson wasn’t particularly stylistically notable. Rather, his skill came from martialling the elements. He knew to get out of the way and let it happen, be it dance routines or effects sequences (or both together), marrying a variety of elements to appealing effect. Today, he would probably be making movies for the MCU, in a reliable but anonymous fashion. Yet Mary Poppins found him receiving his sole Best Director Academy Award nomination; the musical received the most nods of any film that year, thirteen, so beating My Fair Lady and Becket’s twelve. It had to make do with five wins, however, most illustriously Julie Andrews. Which was, at least, one in the eye for the snub of the My Fair Lady lead role; she wryly thanked Jack Warner in her acceptance speech for passing her over.

Andrews is merely the foremost of the performers here. Dick Van Dyke has been the subjected to years of mockery for his patented brand of cockernee, but it’s a choice that absolutely works for the larger-than-life cheerful chappy he’s playing – you’ll have trouble even recalling Lin-Manuel Miranda in the equivalent role in Mary Poppy Returns (2018) – even if he professed that Jim Dale or Ron Moody would have been more suitable.

Mary Poppins also took home Oscars for Visual Effects, Editing, Art Direction (colour) and Best Song in the form of Chim Chim Cher-ee. David Tomlinson is magnificent as Mr Banks, whose heart thaws as fantasy triumphs over the pecuniary motive (Tomlinson would also return to the Stevenson fold for both The Love Bug and Bednobs and Broomsticks). Glynis Johns is his suffrage-enthused wife, an element that would surely be made into a heavy-handed meal today but is light and amusing while not actually mocking her. And Karen Dotrice and Matthew Garber make for appealing rather than irksome Banks children.

Obviously, the plot is an excuse for a string of set pieces/songs, including the animated horse race highlight (crude in places, perhaps, from today’s perspective, but still impressive in its energy and musical engagement). Something like Step in Time isn’t such an amazing song on its own (appropriating Knees up Mother Brown), but combined with the chimney sweep choreography, it becomes so. I’m not as convinced by the “amusing” Admiral Boom (Reginald Owen) firing off his cannon next door (although he makes a return in Mary Poppins Returns, so I guess he’s a fan fave). The Uncle Albert (Ed Wynn) scene is interestingly oddball, with him laughing so hard that he floats up to the ceiling; it’s suggestive of an alt-realm beyond the one initiated by the arrival of nanny. Later, Dawes Sr, the old director of the bank, follows suit.

It seems Travers was highly unimpressed by the animation (that bit makes it into Saving Mr. Banks (2013), where Guantanamo Hanks plays the equally reputable Walt). Combined with her distaste at the watering down of the title character and the divergence from her wish that period songs be used, she nixed any follow ups (which Saving Mr. Banks conspicuously does not relate). Maybe she’d have favoured Emily Blunt’s less cosy version, in that case. Or probably not, given the cabaret number. Mary Poppins Returns as a whole singularly lacks its predecessor’s warmth and dreamy gusto. Some films become favourites in spite of their being rather middling – nostalgia often lies at the root – but Mary Poppins fully deserves its rep.