This is the loudest snow I’ve ever heard in my life. 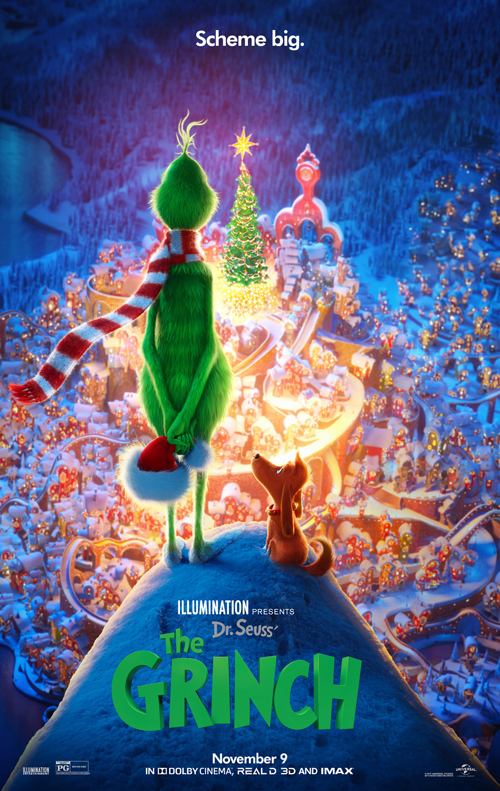 The Grinch
(2018)
(SPOILERS) A pot-bellied (okay, fat) curmudgeon with a twisted sense of humour and unruly hair attempting to destroy Christmas for everyone? Never has the noxious notion had more resonance. Actually, the nightmarishly unpleasant and saccharine 2000 Jim Carrey incarnation probably bears more resemblance to How the Boris Stole Christmas! But the subtitle And Didn’t Put It Back Again at the Behest of His Masters, the Elite, as Part of Their Plan to Cull, Sterilise and Reset the Entire Global Population doesn’t quite fit Dr Seuss’ tale of a character whose heart thaws in the face of basic goodwill of all men. Or Whos. Illumination’s version of the Christmas classic is exactly what you’d expect from an envisioning by the animation house responsible for the Despicable Mes (they also previously tacked The Lorax). Which is to say, it’s as easily digestible, undemanding and indistinct from its stablemates as one DreamWorks animation or Pixar pic is from the other.

Narrator: Who would do such a thing? Who would stoop down this low?

Which doesn’t mean The Grinch is anaemic, or even particularly disappointing. Only that it has no flair or individuality beyond the touchstone Seuss verse. Benedict Cumberbatch is surprisingly good as the title character – I say surprisingly, because his American accent for Doctor Strange stinks, but you have to be reminded it’s him here. Pharrell Williams continues his mutually profitable relationship with Illumination, and the soundtrack follows the overstuffed pop sensibility DreamWorks started.

The Grinch: Don’t they know what I’ve done?

The Grinch, like all transhumanist Satanist technocrats, absolutely cannot stand people having a good time, particularly during an appropriated pagan festival. He also sleeps with animals, a vicinity of behaviour that hasn’t been beyond the bounds of previous Tory leaders (allegedly). Actually, Max the dog is probably the highlight of the piece. He’s an irrepressibly upbeat pooch, even when press-ganged into a subversive drone flight, during which he is distracted by a cornucopia of sausages. There’s also a strange goat and an overweight reindeer.

Narrator: He tried to make right. What he had made wrong.

Generally, this iteration of the Grinch isn’t all that hissable to begin with, so there’s less sense that he’ll have a mountain to climb in order to change his ways. Not unlike Jack going mad in The Shining, but starting the movie halfway there already. I think it’s fair to say that, if the Boris suddenly reversed course, just in time, he wouldn’t have anyone magnanimously inviting him to dinner anyway “Because you’ve been alone long enough”. The Grinch at his worst is no more than a loveable scamp in comparison.