What do I get? A few runny noses and some dead citrus! 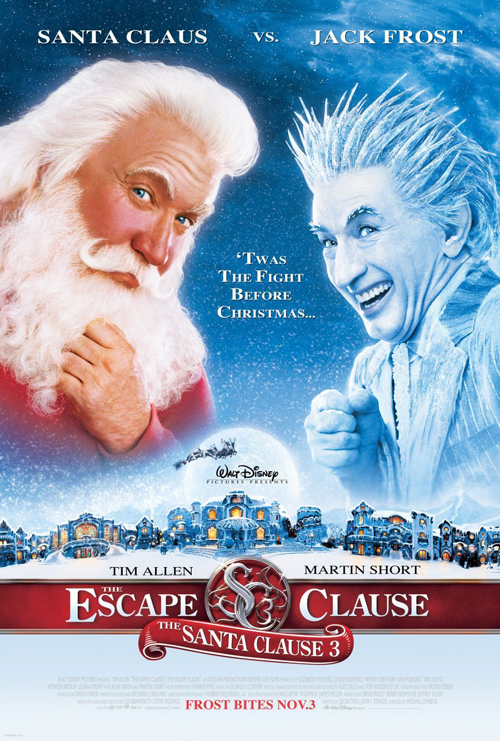 This one finds the very likeable Elizabeth Mitchell rather thanklessly returning as a preggers Mrs Claus, along with Judge Reinhold, not yet botoxed beyond recognition as straight-man Neil, hubby of Scott Calvin’s ex (Wendy Crewson). Somehow Alan Arkin and Ann-Margaret have also been induced – the green stuff’s lure doubtless – to appear. This is Short’s show to steal, though, and he duly does so from Allen, smug in a not so special fat suit and in need of a pay cheque before Toy Story 3 rolls back round (I see he’s been cancelled from the announced Buzz Lightyear movie).

Short is Jack Frost, up to no good and attempting to throw a spanner into Santa’s works (“I’m a legendary figure too, with enormous power in my own right”). You can’t help but be a little on his side, and there’s a spell during The Escape Clause – for about ten minutes during which Frost induces some Back to the Future Part II/ It’s a Wonderful Life shenanigans whereby Scott loses his Santahood and Frost takes over – where it looks as if the movie might do something marginally entertaining. Alas, this is not to be, and Frost’s altered reality is resolved dismayingly quickly.

Charlie Freak would probably have it that this is a tale of Trump foretold, with Tim Allen/Santa/the Donald enduring an attempted coup by Jack Frost/Joe Biden, but winning through. Except for the bit at the end where Jack is given a magic hug that thaws him out. We’ve all seen the kind of magic hugs Joe likes.

There’s the occasional good line here. Well, well-delivered one by Arkin, at any rate (“Our grandchild is being born in the broom closet of a Canadian toy factory”). But The Santa Clause 3: The Escape Clause is pretty lame, desperate stuff. Which in no way means it’s sufficiently reprehensible that it should be vying for honours at The Golden Raspberry Awards, never an especially inspired ceremony in its picks (Allen and Short were singled out).