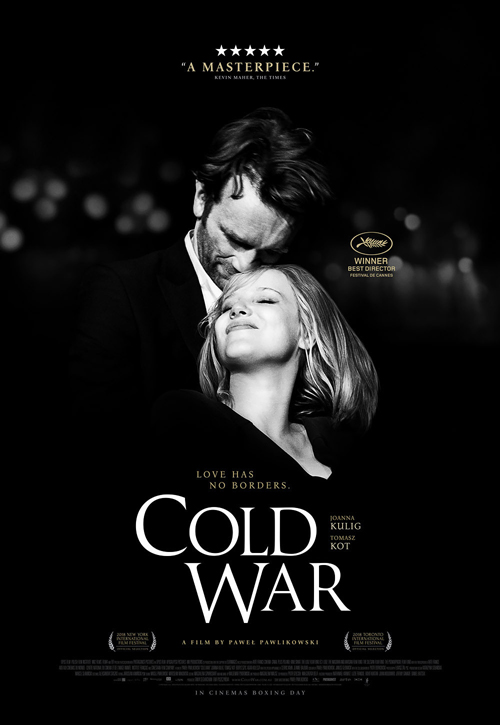 Cold War
(2018)
(SPOILERS) Pawel Pawlikowski’s elliptical tale – you can’t discuss Cold War without saying “elliptical” at least once – of frustrated love charts a course that almost seems to be a caricature of a certain brand of self-congratulatorily tragic European cinema. It was, it seems “loosely inspired” by his parents (I suspect I see where the looseness comes in), but there’s a sense of calculation to the progression of this love story against an inescapable political backdrop that rather diminishes it.

The canvas appears to unfurl organically at first, with an eye on the push-pull elements of opportunism and simple survival in post-WWII Poland. Tomasz Kot’s musical director Wiktor is buttoned down by the requirements of state edicts, spotting talent for a folk music troupe. Then Joanna Kulig’s applicant Zula catches his eye and his heart, leading to an affair and an agreement to leave for the West when the group performs in East Berlin. Except that Zula doesn’t show. “I wouldn’t have escaped without you” she will tell him pointedly; he fled alone. Later, they meet in Paris when he is working in a jazz club (nice), and again in Yugoslavia, where he is promptly turfed out on his ear. It is only a couple of years after this that they reunite properly in Paris, but things are not what they were; he hits her, she returns to Poland, he follows and ends up in a work camp. She gets him out through her connections (marriage to Borys Szyc’s party-line music official) and they make a suicide pact.

The narrative flights may serve the theme, but they detract from the love story itself. There’s no real engagement with the couple, who become increasingly functional as Cold War progresses. Such that, by the time of their mutual fates, it feels like they are doing this because Pawilokowski has scoped such a course out for them, not because it is germane. The story is mostly from Wiktor’s point of view – it takes about an hour before a scene lets us in on her interior position and even then, she remains oblique – which leaves various character points hanging. Such as a teacher entering into a relationship with a student, ensuring she is picked even because he is attracted to her (“Are you interested in me because of my talent? Or just in general?”) And her having been abused by her father. Arguably, there’s dual using here, with Zula reporting on Wiktor and getting what she wants out of the arrangement, but we’re allied with Wiktor’s perspective more often than not.

Pawlikowski’s political commentary is contrastingly much more engaging, chronicling as he does the music group’s changes in direction through anthem and uniform (and Stalin banners), Wiktor’s emphasis on creative freedom and Zula’s indifference to the same. Notably, Wiktor remains silent when his colleague Irena (Agata Kulesza) objects to the inclusion of propaganda.

But still, Cold War hinges on the couple’s interaction over fifteen years, and the picture at once seems to ask us to be involved in their fates and while simultaneously creating an air of indifference with regard to them. While they profess their love at various points – “I know that love is love and that’s that” Wiktor tells her when discussing her decision not to leave with him; later she tells her reflection “I love him and that’s that” – there’s no real evidence this is what it is, that it’s any more than an infatuation exacerbated by long periods apart. Pawlikowski hasn’t managed to persuade us otherwise, and the effect, when they are united for a period, is of two souls who don’t really mesh (“In Poland you were a man. You’re different here”). I could see that being intentional – the imposition of societal falsehoods breeds personal deceptions and misaligned expectations – but because the characterisations are so oblique that it’s unclear either way.

Lukasz Zal’s black and white cinematography is striking, as are the compositions, but they only add to the sense of an exercise in auteurism, self-dictated as the kind of film made by an acclaimed European director meditating on life, love and politics. In principle, the approach to telling this romance is an interesting one – doubtless inspired by When Harry Met Sally… – the backdrop even more so, but the overall result fails to gel.