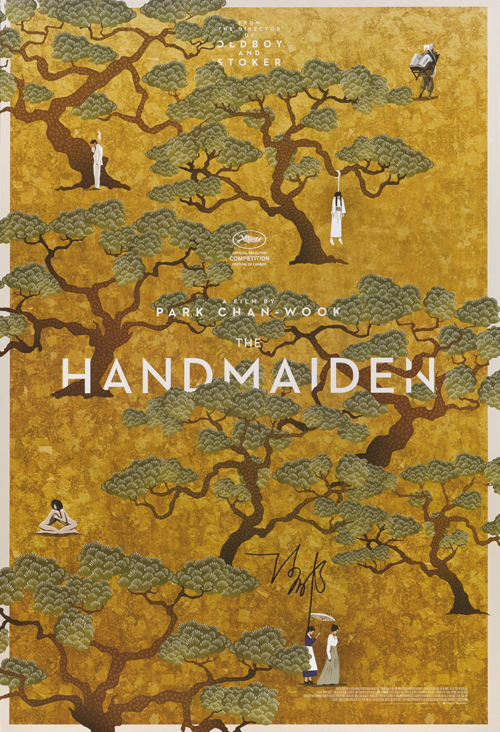 Mostly, I was disappointed by the first twist at the end of the first hour, undermining the unfolding of an engrossing character piece in which pickpocket Sook-hee (Kim Tae-ri) is hired by conman “Count Fujiwara” (Ha Jung-woo) to become the handmaiden of the woman he plans to marry and scam, Lady Hideko (Kim Min-hee). Hideko in turn is kept by her uncle Kouzuki (Cho Jin-woong), a thoroughly dodgy sort (although we don’t see quite how dodgy in Part 1, it’s enough to know he plans to marry her).

The growing passions between Sook-hee and Hideko, as the former attempts to sell the latter on the appeal of the count and then can barely conceal her jealousy with regard to developments, is entirely compelling and seductively performed. So much so, the sudden twist at the end of Part 1 whereby, having arrived at the asylum where Sook-hee (reluctantly) is to help ensure Hideko is committed, it’s revealed that the count and Hideko were planning a means to get her away from her uncle all along, through committing a worthless girl to an institution in her place.

We’re fed the entirely unsavoury backstory of Hideko’s treatment at the dictates of her uncle, very typical sadistic revelry on Park’s part, and the count’s introduction and clever scheme. Then there’s another twist: the previously portrayed passions between Sook-hee and Hideko are real and they devise a plan to put one over on the count (it’s at this point that the essential plot diverges most markedly from Fingersmith).

Now, these somersaults are, in and of themselves, engaging and surprising, but they become the tail wagging the dog, and character development, and investment in Sook-hee and Hideko, pretty much go out the window at this point. Park wanted a “happy” ending, but we aren’t nearly as focussed on that once his heroines take a back seat to the twists and turns.

Certainly, you might argue it’s a failure on my part to appreciate The Handmaiden for what it intends to be, which is a fairly slick genre piece. But for me, the picture squandered its potential for human interest beneath the layers of sly subterfuge. Additionally, Part 3’s refocus from Hideko and Sook-he to the apprehension of the count and his extremity-removing torture by Kouzuki just isn’t my grisly cup of tea. One couldn’t help but feel Park couldn’t wait to get to that bit. That was the movie for him. He’s undoubtedly a very talented filmmaker, and The Handmaiden is a very handsome movie. Tonally, however, I tend to a far remove from finding his interests interesting.