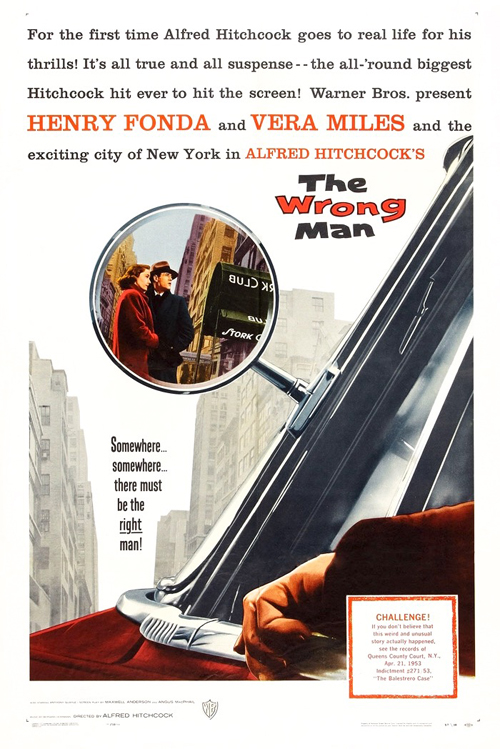 The Wrong Man
(1956)
(SPOILERS) I hate to say it, but old Truffaut called it right on this one. More often than not showing obeisance to the might of Hitchcock during his career-spanning interview, the French critic turned director was surprisingly blunt when it came to The Wrong Man. He told Hitch “your style, which has found its perfection in the fiction area, happens to be in total conflict with the aesthetics of the documentary and that contradiction is apparent throughout the picture”. There’s also another, connected issue with this, one Hitch acknowledged: too much fidelity to the true story upon which the film is based.

It’s easy to understand why the director wanted to make the film. The subject matter relates, after all, to his lifelong fear of authority, and more particularly, the authorities (having been famously locked in a cell courtesy of his dad, for five long minutes, at an impressionable age). Here was a man, Manny Balestrero (a typically sombre Henry Fonda) unjustly accused of armed robbery and put on trial after officers of the law essentially fitted him up, intent on securing a solved case with minimum fuss. Manny’s life proceeds to fall apart, most disastrously in the case of wife Rose (an impressive Vera Miles), who suffers a nervous breakdown and ends up in an institution.

Bowers: It’s nothing for an innocent man to worry about. It’s the fella that’s done something wrong that has to worry.

Hitch, filming in New York – well, the bits that weren’t shot in the nice-and-warm on a soundstage – imbues The Wrong Man with the kind of authentic lustre you’d expect from a true-life tale. The early passages, as Manny is bounced around by the police and pointed out by witnesses, carry an effective sense of the terror of absolute helplessness when the system announces it has you in its sights (albeit also of Manny’s passivity and cluelessness about his rights). There are potent moments, such as his misspelling of the stick-up note the way the perpetrator did, and the manner in which its quite easy to see Manny, through the eyes of the victims, as tantamount to Once Upon a Time in the West’s Frank rather than the mild-mannered husband and father he is. And the entire opening section dramatizes the lie of “If you haven’t done anything, you have nothing to fear”.

But one is also aware of the over-stylisation Truffaut points out. Particularly egregious is the “POV” of the incarcerated Manny, as the camera faces him and then moves around and above and below, capturing his despair/disorientation.

Once Manny is out on bail, The Wrong Man’s tension mostly evaporates, with Anthony Quayle appearing as an attorney who won’t even get to win his client’s trial and Rose gradually losing her grip. Hitch fessed up to the failure that was honouring to the facts of the case, whereby a significant chunk of the picture’s second half is devoted to Rose’s deteriorating state (Miles may be very good, but that doesn’t mean the scenes really play).

More damagingly, there is a mistrial (“Your honour, do we have to sit here and listen to this?” asks one of the jurors!) And then the actual guy is caught (Richard Robbins, sharing a certain bony facial structure with the leading man). Hitchcock Liked the “ironic coincidence” of the perp being discovered as Fonda is praying, but I don’t think that’s the message conveyed. Rather, it plays out sincerely, as divine intervention, and so represents another miscalculation on his part.

Hitch was a little deflated by Truffaut’s charges, one suspects (“Let’s just say it wasn’t my kind of picture”), but it solidifies in my mind that here he was, during his most prolific period, amid some of his greatest successes, but with a run of four movies (form The Trouble with Harry to The Wrong Man) that really weren’t all that. The best of them, To Catch a Thief, pales in comparison to other highs from that decade (Strangers on a Train, Rear Window, North by Northwest).

Pauline Kael called The Wrong Man “unusually drab”. She recognised its “almost Kafkaesque nightmare realism” but complaining that the material slips into tedium rather than tightening the screws. There’s even some of the director’s favoured cod-psychology thrown in for good measure (“Her mind is in an eclipse… She sees great dangers everywhere” the sage shrink tells Manny). Maybe that is what they told him, but it’s also the rare point in the picture where Hollywood hyperbole seems to intrude. 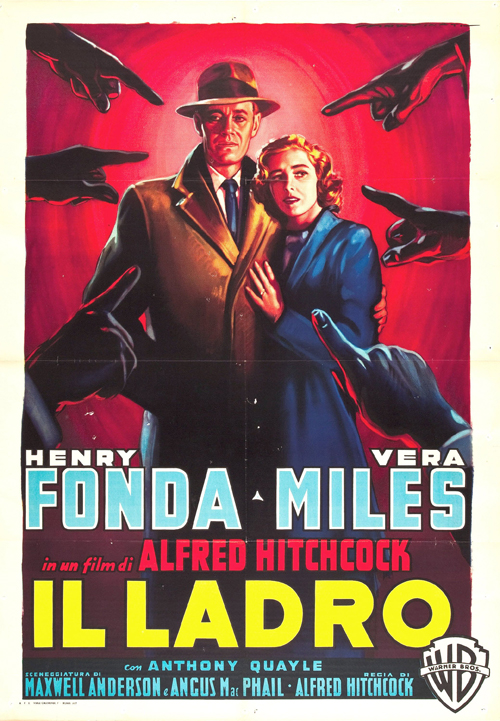