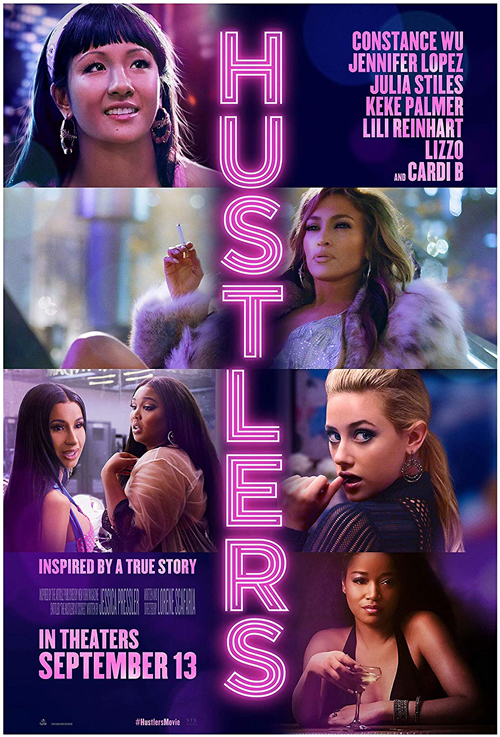 Hustlers
(2019)
(SPOILERS) Sold as a female Goodfellas – to the extent that the producers had Scorsese in mind – this strippers-and-crime tale is actually a big, glossy puff piece, closer to Todd Phillips as fashioned by Lorene Scarfia. There are some attractive performances in Hustlers, notably from Constance Wu, but for all its “progressive” women work male objectification to their advantage posturing, it’s incredibly traditional and conservative deep down.

Wu’s strip-club ingenue is taken under momma figure Jennifer Lopez’ wing (or fur coat), gets pregnant, has a kid, her other half leaves and she ends up back at the club, where she and Lopez’ gang drug and rob clients who deserve it (Wall Street types – all very Robin Hood, you see – so they have it coming). Even before that, Lopez has told Wu how it is with titillated clients (the client in question being the increasingly haggard looking Frank Whalley: “It’s business. And it’s a more honest transaction than anything else they did that day”).

Inevitably, things go wrong, particularly when Wu – who has risen as high in Lopez good books as she can, getting a chinchilla fur coat for her pains – is replaced by cokehead Madeline Brewer in Lopez’ affections. There are the necessary scrapes (Wu shows she’s cool under pressure in taking an injured victim to the hospital) before the situation escalates and a sting goes down. All of this told to Julia Stiles’ journalist in flashback interview format.

The biggest signal Hustlers isn’t up to the hype is that it resorts to anthemic emotional montages at any given drop of a hat; they’re in abundance throughout. The picture goes for the easy option every time, right down to its moral focus. It has its moments, but there’s good reason its initial awards buzz petered out.