Well, Satan is in deep shit! 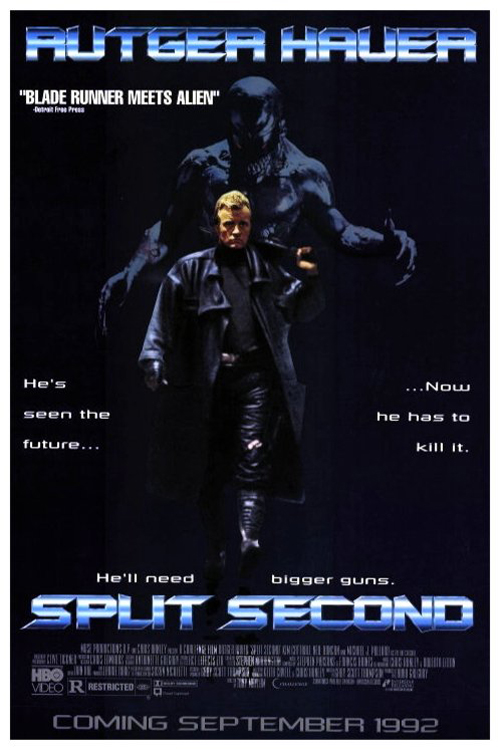 Split Second
(1992)
(SPOILERS) Greta Thunberg’s favourite movie. Probably. Well, her “people’s” anyway. Somehow, I managed to miss this one when it came out, although its lousy reviews probably had something to do with it. I was nudged into taking advantage of its current, Bezos-sanctioned availability by an Empyre take that called it “glorious” and suggested “As a showcase for a mischievous Hauer behaving badly… it’s almost matchless”. The recently departed Rutger Hauer is on magnificently over-emphatic form, it’s true, and there’s frequent amusement to be had from the dialogue and chemistry between the star and sidekick cop Neil Duncan, but Split Second lacks a crucial sense of gusto as it crunches through its B-, straight-to-video, supernatural sci-fi serial-killer buddy movie clichés.

The unwieldy mashup quality is such that the heart-extracting serial killer – “A psychotic with a psychopathic personality” no less – of a drowned 2008 London turns out to be a mutant, DNA-absorbing (of its victims) xenomorph-looking mofo obsessed with astrology and some kind of Satanic quest. This can apparently be traced back to the picture’s “straighter” origins, whereby the ritualistic murder plot skewed a bit too close to The First Power (1990). Such demands can’t have helped in delivering the budget production – Wiki lists it as $7m, but I’d be surprised if it was that high – which duly put veteran Riddle of the Sands (1979) director Tony Maylam through the mill; Ian Sharp had to finish the picture off and gets a nod in the end credits.

Stone: The only thing we know for sure is that he’s not a vegetarian.

The setting ultimately appears to be pretty much irrelevant, but scrupulously endorses Greta’s favourite subject, under its then catchphrase. London of thirteen years ago is suffering “the devastating effects of global warming” and “The warnings ignored for decades have now resulted in undreamed of levels of pollution where day has become almost endless night”. Cue much use of establishing night-time shots of London. There are also a few early scenes with ankle-deep water and the odd mini hovercraft to drive home the illusion (the Thames is currently at its highest level since Black Monday 1999). Posters warn that “Smog kills” (and also reference to “Plague Pits” – it's like they could see ahead to 2020! Oh, wait...)

One could imagine an art director let loose having a lot of fun with this scenario, but what we mostly get are a lot of damp-looking tower blocks and the occasional fetish club (told he must order two drinks minimum, Hauer’s Harley Stone responds “Get me two coffees, extra sugar”). The club owner is none other than Ian Dury.
Thrasher: He’s worked in every hellhole in the world. And been fired from all of them.

Stone has a psychic link with the murderer, anticipating his moves, on account of his having been injured by the killer years back (that would be the DNA thing). During which Stone’s partner was killed. For which he’s feeling guilty, on account of having an affair with his partner’s wife (Kim Cattrall, obligingly on hand to show her breasts in lieu of having any degree of characterisation). Hauer is up to 111 throughout, living off chocolate, coffee and cigars (before racing up the stairs of a tower block, he makes sure to light up – with a blowtorch).

Durkin: There was a rat, so I shot it.
Stone: You shot my kitchen, that’s what.

He also seems to have inherited Withnail’s kitchen – “Sorry about the pigeons. I can’t kill 'em” – and the accompanying dump of a flat to boot. Naturally, Stone doesn’t get on with his haranguing boss (Alan Armstrong) or an antagonist fellow officer (Pete Postlethwaite). He’s also less than pleased when Duncan’s Dick Durkin is made his partner. At first. In tried-and-tested buddy-movie fashion.
Durkin: We’re getting big guns, right? That’s where we’re going, to get big guns.
Durkin is bookish and reserved, despite the alleged fact that he “gets laid every night”. As the picture progresses, though, Duncan manages to achieve the unimaginable, stealing the spotlight from Hauer. Particularly so when Durkin is shot in the chest by the killer (“Oh dear”) before returning from the grave, thanks to a bulletproof vest, with new resolve. He’s positively wired (“We’ve got to get bigger guns!”) and Stone duly pumps him full of caffeine, sugar and nicotine.

None of this is enough to offset the sluggish pace (even at a slender ninety minutes). Nevertheless, that seems part and parcel of the picture’s determined B-ish ness and in keeping with much of Hauer’s output from that period (see also 1991’s Wedlock). The reveal of the monster – knocked together by future instigator of Sean Connery’s retirement Stephen Norrington in three weeks – is wisely kept until the end, and takes place in a flooded subway (this was mostly Sharp’s contribution). As we now know, the events of 2008 were nothing like those in Split Second. They were much, much worse.