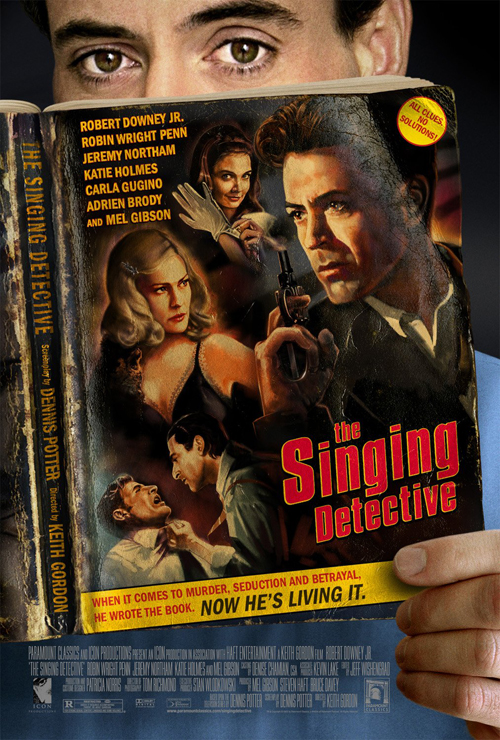 The Singing Detective
(2003)
Icon’s remake of the 1986 BBC serial, from a screenplay by Dennis Potter himself. The Singing Detective fares less well than Icon’s later adaptation of Edge of Darkness, even though it’s probably more faithful to Potter’s original. Perhaps the fault lies in the compression of six episodes into a feature running a quarter of that time, but the noir fantasy and childhood flashbacks fail to engage, and if the hospital reality scans better, it too suffers eventually.

Potter was keen to get a film version made, and The Singing Detective went through various lineups including Robert Altman & Dustin Hoffman and David Cronenberg & Al Pacino before ending up with Mel Gibson’s outfit. Where it was given to Keith Gordon as his fifth feature, with Robert Downey Jr starring; Downey had been buddies with Gibson since Air America.

The picture starts out well – psoriasis-ridden Dan Dark is a perfect role for pre-Marvel, pre-black-eye Downey, giving him the chance to vent dyspeptic spleen at anyone and everyone (aside from Katie Holmes’ nurse, in the original’s Joanne Whalley role). You can tell the makers um-ed and ah-ed about how repellent to make Dark’s skin condition, concerned at something that might be too off-putting (“Have you never seen a human pizza before?”), and ending up with something part way between upsetting and Freddy Kreuger (as it was, it didn’t really matter, since no one saw the film).

When he’s not raging against his carers, Dark is retreating into a fictional detective noir world, one that never really lands since it’s neither intriguing enough, fun enough or escapist enough, the odd song number aside; Jeremy Northam is the man who hires Downey’s PI, while Robin Wright Penn is Dark’s wife and a prostitute in his fiction. His mother (Carla Gugino) similarly doubles in flashbacks and fantasy. And the cast generally is very impressive, with Adrien Brody and Jon Polito as hoods, and Saul Rubinek and Alfre Woodward on the hospital staff. Most notable is perhaps Mel himself wearing a Stooges’ Curly bald cap and proferring his best Peter Falk as Dark’s psychiatrist, whom Downey insults with the label “Dr Do-Nothing” (prescient of his recent adaptation’s overall quality).

At one point, Dark offers the unfortunate critique, “If this was a movie, it would be on the cutting room floor”, but the problem isn’t that The Singing Detective is disposable so much as perfunctory. Rather like the long-gestating adaptation of The Hitchhiker’s Guide to the Galaxy, by the time it finally appeared, it had lost the passion and freshness that made it so admired and respected in the first place. I pondered that Gordon might have attracted more (well, any) viewers if he’d got the drop on Sin City with a similar comic book noir version of the rather inert fantasy section, but I don’t really think this ever stood a chance.