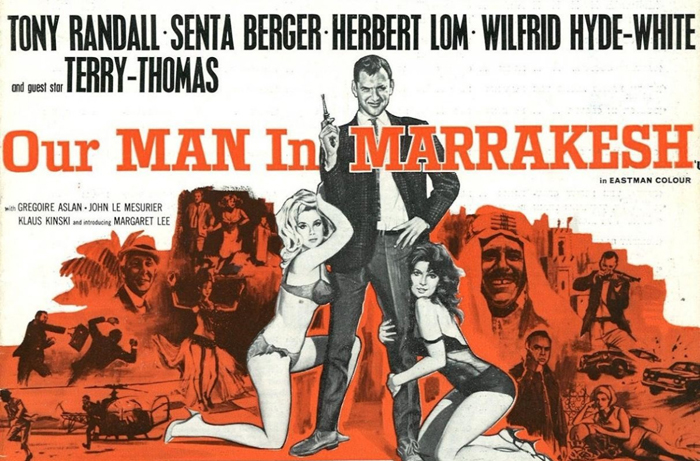 Our Man in Marrakesh
aka Bang! Bang! You’re Dead
(1966)
(SPOILERS) I hadn’t seen this one in more than three decades, and I had in mind that it was a decent spy spoof, well populated with a selection of stalwart British character actors in supporting roles. Well, I had the last bit right. I wasn’t aware this came from the stable of producer Harry Alan Towers, less still of his pedigree, or lack thereof, as a sort of British Roger Corman (he tried his hand at Star Wars with The Shape of Things to Come and Conan the Barbarian with Gor, for example). More legitimately, if you wish to call it that, he was responsible for the Christopher Lee Fu Manchu flicks. Our Man in Marrakesh – riffing overtly on Graham Greene’s Our Man in Havana in title – seems to have in mind the then popular spy genre and its burgeoning spoofs, but it’s unsure which it is; too lightweight to work as a thriller and too light on laughs to elicit a chuckle.

Tony Randall is fine as protagonist Andrew Jessel, but because of the tonal issues, his presence is something akin to Chevy Chase in Memoirs of an Invisible Man: too close to a straight hero but lacking the prerequisite mettle, and not given a chance to make you laugh in Bob Hope or Bill Murray “wrong guy in the wrong place” way (Randall is, of course, best known for the TV version of The Odd Couple, but his versatility is there for all to see in the likes of 7 Faces of Dr. Lao and the voice of the Brain Gremlin in Gremlins 2: The New Batch). Additionally, he has little rapport with leading lady Senta Berger’s Kyra Stanoy; Berger was one of many European actresses during the 60s who dipped their toes in English-language movies to limited success (she’s also notable for The Quiller Memorandum).

Their relationship is established following a knife-in-the-back opening lifted from Hitchcock’s The Man Who Knew Too Much remake; Herbert Lom’s Casimir is supposed to meet a contact who has caught the bus from Casablanca airport to Marrakesh carrying $2m as a bribe to fix a United Nations vote (the only joke there being that the UN is an otherwise reputable organisation). Unfortunately, Casimir doesn’t know exactly who this contact is. Randall’s oil man – actually a hotel rep – Jessel? Berger’s Stanvoy? Wilfred Hyde-White’s Arthur Fairbrother? John Le Mesurier’s George Lillywhite?

There ought to be more fun than we get with such actors in the mix. And with Klaus Kinski as Lom’s head henchman. Unfortunately, despite the exotic location and serviceable direction from Don Sharp, Our Man in Marrakesh never takes off. Peter Yeldham’s screenplay moves from mistaken identity to chase to further chase in largely limpid fashion, rarely developing sufficient intrigue or a sense of suspense (I wouldn’t entirely lay the blame on Yeldham, though – “We’re suspect of being murderers, and we’re being chased by murderers” is a good line – since he also wrote the decent Age of Consent for Michael Powell).

Even the third act arrival of the magnificent Terry-Thomas isn’t enough to salvage matters, inimitably Terry-Thomas as he is while being encumbered by the frankly bizarre decision to paint him in brown face and call him El Caid (known as “the oily cad” at Eton). On one level, it’s so brazenly, cheerfully wrong-headed, it’s almost deserving of perverse respect. On the other, your jaw is just hitting the floor. No, I think there’s a reason Our Man in Marrakesh didn’t really stick in my memory. Beyond the title. The UK title. 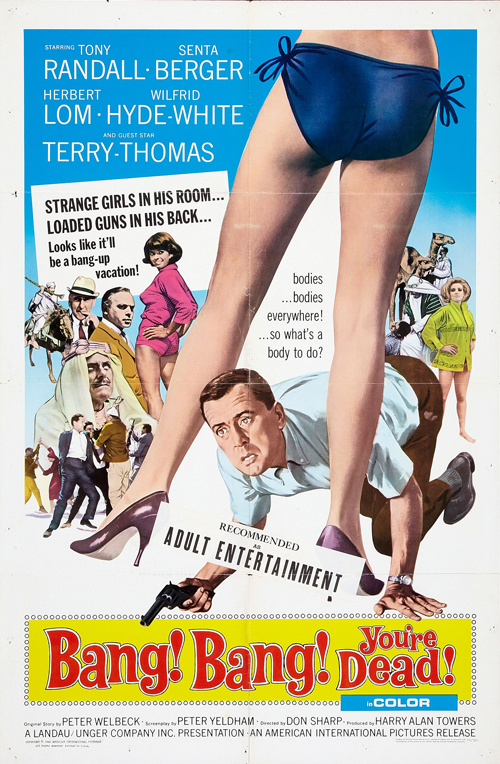