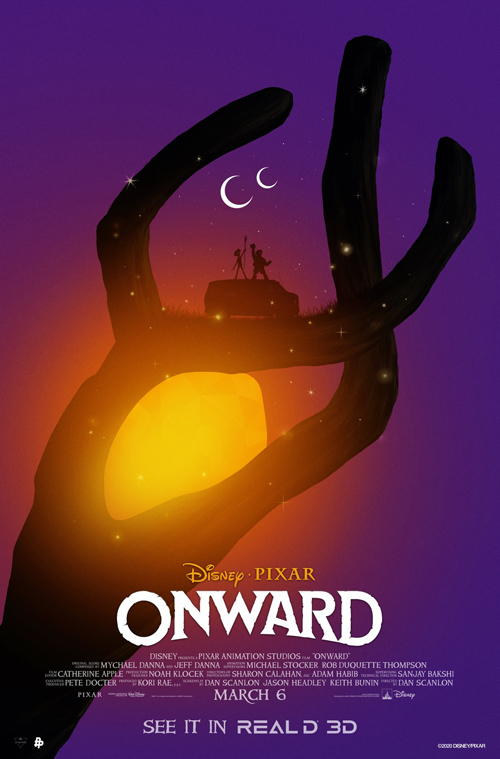 Onward
(2020)
(SPOILERS) Pixar’s Bright, or thereabouts. The interesting thing – perhaps the only interesting thing – about Onward is that it’s almost indiscernible from a DreamWorks Animation effort, where once they cocked a snook at such cheap-seats fare, seeing themselves as better class of animation house altogether. Just about everything in Onward is shamelessly derivative, from the Harry Potter/fantasy genre cash-in to the use of the standard Pixar formula whereby any scenario remotely eccentric or exotic is buried beneath the banal signifiers of modern society: because anything you can imagine must be dragged down to tangible everyday reference points or kids won’t be able to assimilate it. And then there’s the choice of lead voices, in-Disney star-slaves Chris Pratt and Tom Holland.

Onward’s box office stunk. It would be easy to blame that on the first stages of the global cull, but it could just be because the movie is bereft of ideas, trying to mashup Harry Potter and Indiana Jones with a dash of, yes, Bright, to no ingenious ends whatsoever. Of course, the history of terrible animated movies making a mint is a proud one (Trolls) so maybe Onward would have gone onward and upward.

As is often the case with Pixar’s staff of adolescent adults, the movie is all about parents, rather than the kids. Don Scanlon previously received a writing/directing credit on post (or is that pre?) adrenochrome/archon disclosure movie Monsters University. Here he, Jason Headley and Keith Bunin posit a world of mythic creatures in which the Luciferian world has fallen prey to Ahrimanic materialism, the old ways lost or disinherited (notably, if you’re into all things mudflood/Tartaria/reset, Onward’s landscape is littered with architectural references to the old world and its lost arts, ignored by its denizens but ready and waiting for someone armed with the secret to come along and access the lost “tech”).

Ian (Holland) and Barley (Pratt) embark on a quest to spend a day with their dead dad (the Pixar go-to of emotional resonance being the familial bond, when all kids going to the movies actually want is to forget their family and have an adventure). Dad constitutes the sole point of visual and mirthful inspiration in a an otherwise entirely aesthetically off-putting picture (the elf design is ghastly, basically Inside Out with ears). This owing to his having been only half rendered into corporeal form: the lower half. As a result, for blending-in purposes, the brothers have fashioned a floppy top half, leading to a slew of Weekend at Bernie’s-style visual gags that, to be fair, have a reasonably high hit ratio.

But God, elsewhere. The gang of motorcycle pixies. Caring but kick-ass mom (Julia Louis-Dreyfus). The incessant emotional beats whereby you can practically see the plot-blocking of the whiteboard sessions screaming out to you. Barley thinks he’s a screw up (think Pratt doing Jack Black). Ian comes to realise Barley did everything for him he wished their dad had been there to do: “I never had a dad, but I always had you” (I half wondered if this moment of realisation would reveal Barley was Ian’s reincarnated dad. But that would have been silly. Unlike everything else here).

Along the way in their bargain-basement “quest” – “On a quest, a clear path is never a straight one” – there’s a smattering of decent sequences, including the invisible bridge from Indiana Jones and the Last Crusade and another, involving a gelatinous cube, that puts any Indy sequence after the first two to shame (while also borrowing liberally from Raiders of the Lost Ark). And there’s some rowing on a giant Wotsit.

Admittedly, Onward is fairly inoffensive, but it’s so utterly absent the basic “idea” that would garner a greenlight – and which, at one point, led to the assumption Pixar really was a quality brand, simply because they were sure to do something interesting with it (give or take a Monsters, Inc. or a Cars) – you wonder where the quality control went. Was it commissioned before or after John Lasseter’s creepy hugs became a no-go area?