Now, stop stealing things, do your fucking homework and find some decent friends. 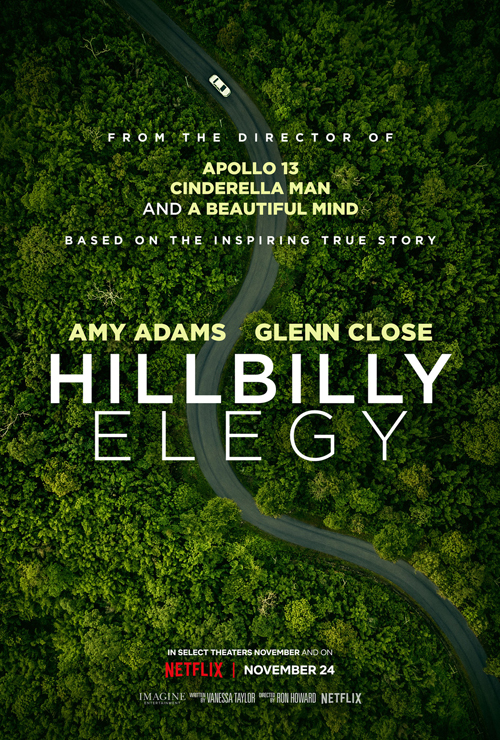 Hillbilly Elegy
(2020)
(SPOILERS) A danger with fashioning Oscar bait is that it can be instantly called out for undisguised cynicism and thus immediately ignored. That appears to be the fate of Hillbilly Elegy, in which Ron Howard further evidences his journeyman “versatility” with a tale of rednecks – sorry, mountainfolk – and their trials and tribulations. Well, apart from regular nominee Glenn Close and her prosthetic ankle tits.

JD: You’re a shitty mom, and so are you.

I reference the redneck slur intentionally; it’s implicit in this adaptation of JD Vance’s 2016 memoir that his recall for a summer internship interview is the consequence of taking offence at its use during a dinner. The staff are evidently concerned about appearing prejudiced and thus trip over themselves not to be called out. If we applied that metric to the oeuvre of Little Ronnie Howard, it would be demanding equal status for the intensely average, imperceptible talent troughing out mediocrity year after year. It does, after all, have its place. It even wins Oscars.

And to be completely fair, I’ve enjoyed a few of Howard’s movies (Splash, Ransom, Rush, Solo: A Star Wars Story), but I was aware as far back as Willow that he wasn’t nearly as versatile as he’d like to be. Hillbilly Elegy is closer to the wheelhouse, in inorganically heart-warming terms, of his early hit Parenthood. But where that movie was content to serve as a lightweight soufflé of observational comedy, he’s here straining for something more profound. When Little Ronnie tries for profound, the results can be outright disastrous (A Beautiful Mind). He avoids that this time, fortunately, but take away the hillbilly sheen (if you can call it that) and you’ve seen this story many times before. In the 80s, Hillbilly Elegy would probably have starred Debra Winger or Meryl Streep and featured a score of similarly indecent uplift as the one by Hans Zimmer and David Fleming.

I hadn’t realised going in this was an autobiographical tale, and I suspect the critical mauling it received is less about the film’s overall quality or the Little Ronnie factor than its status – albeit, unarguably watered down and shorn of any overt politics by dyed-in-the-wool liberal Howard – as a conservative-leaning piece (“Gainful employment was cramping her style” is uttered at one point, aimed as a barb at mom). JD (played equally strongly by Owen Asztalos and Gabriel Basso as adolescent and adult versions respectively) reflects on his Ohio upbringing with sister Lindsay (Haley Bennett) and a drug addict mum Bev (Amy Adams). Hard-nosed but decent matriarch gran Mamaw (Close) lives just down the street and Papaw (Bo Hopkins) up it a little way. Told in flashbacks, the picture gradually apprises us of how JD made his way to Yale through the Rock of Gibraltar that was his Mamaw and her southwards-extending bosom.

Mamaw: Cause we’re hill people, honey. We respect our dead.

And as far as that goes, it’s reasonably engaging. The problem is Adams. Or Adams’ character. Hers is an overfamiliar type: the hopeless addict (albeit the coda informs us Bev has been sober six years at the time of release). Most prolifically, it characterised Nic Cage’s Oscar grab Leaving Las Vegas. Invariably, empathy only extends so far in such dramatic rehearsals; they may accurately reflect the character’s struggle, but more crucially, they make for an increasingly tiresome viewing experience. Adams is immensely talented, but this druggy schtick became old quickly in Sharp Objects and rather recalls Meryl in Ironweed /Postcards from the Edge mode. Suffering may, within reason, win you Oscars, but it can also put the Academy right off you.

JD is called upon to return home after Bev ODs, which annoyingly coincides with his need to get that aforementioned summer internship in order to pay his way through uni. Episodes of mom’s historic train-wreck behaviour pile up as testimony towards her current state. This is accompanied by a mostly unsuccessful – because there isn’t much to it – thread of family history detective work in terms of her causative emotional traumas. Close successfully chews the scenery and spits it out, her fright perm and glasses somewhat resembling Robin Williams in drag, and it’s an effective performance (which didn’t win her a Golden Globe).

In the end though, you can’t help but shrug. All very commendable, and nice that the main parties have sorted out their lives, and surely a positive that Hollywood doesn’t have licence to mock hillbillies. But at least there might have been something to discuss, whichever way you fall on it, if the movie offered a sampling of the memoir’s outspokenness. Hillbilly Elegy falls squarely into the indifference that characterises Howard at his most consistent.