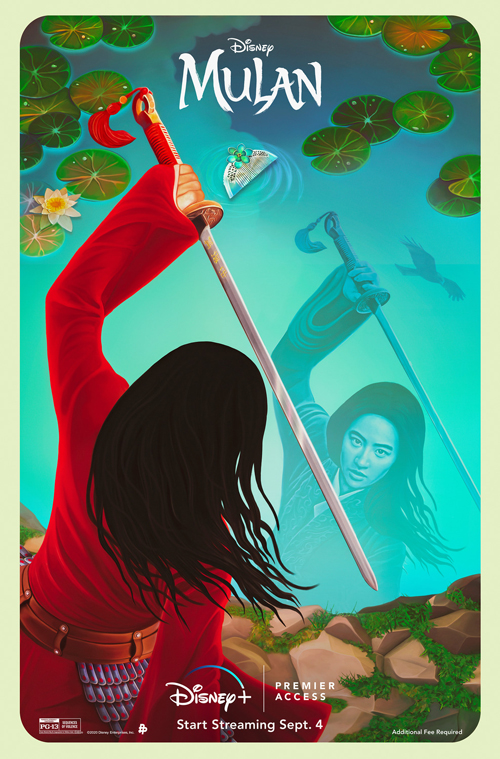 Mulan
(2020)
(SPOILERS) Let that be a lesson to Disney. It’s a fool’s errand to try and beat the Chinese at their own game, no matter how painstakingly respectful – or rather, pandering – you are. Indeed, Mulan’s abysmal $40m box office take in the country – where it did get a proper release, so no plandemic excuses can be cited – feels like a direct rebuke; don’t try and tell us how to suck eggs. There’s an additional explanation too, of course. That Mulan sucks.

By which I mean, it isn’t outrageously bad. Niki Caro has made an incredibly handsome movie. But sumptuous costumes, choreography and vistas can’t disguise the fact that, for the most part, Mulan is dramatically inert (the picture is officially pegged at costing $200m, but Gong Li’s $300m estimate is probably more likely).

Everything here is so reverential, it’s evident Disney were walking on tiptoes. It doesn’t help any either that the cast, with the exception of Gong Li getting all witchy, are entirely forgettable. Lead Yifei Liu is bland (the thirty second cameo by the animated original’s lead voice, Ming-Na Wen, has more impact that Liu’s entire performance). Donnie Yen, Jason Scott Lee and Jet Li have all been much better in any given movie you care to pick. There’s no fun here, making for a very odd Disney classic. What Mulan really needed was a talking dragon. Maybe, I don’t know, go with me here, one voiced by Eddie Murphy. That would have given it a boost.

It’s difficult to say if some of the controversy surrounding Liu (“I support Hong Kong police”) affected the movie, but she undeniably has more offscreen presence than on. What’s most amusing is the minefield the Mouse House seems to have stumbled into with any given decision, duly triggering sensitive parties (or gleeful media). You name it, they stepped in that mousetrap. They eliminated a popular LGBTQ icon (Captain Li Shang, albeit the final movie nevertheless neatly finds a slot in Disney’s burgeoning transgender/transhumanist agenda). They mustered insufficient diversity on the production team front (going to the trouble of employing a female director, but failing to ensure she was an Asian female director). They shot authentically in China… but in areas where there are internment camps (although, there’ll probably be some near Disneyland before long, so that at least may be seen to represent a degree of cultural equivalence). The Wiki page (doubtless with official input) gives any reason going for Mulan’s failure in China, but we all know that if you make a movie people want to see they’ll go and see it (nine times out of ten).

Despite the conspicuous lack of blood – for a movie in which the heroine slaughters hundreds – Mulan services an ominously austere, adult tone. That probably shouldn’t be a surprise from humourless Planet of the Apes reboot writers Rick Jaffa and Amanda Silver (with Lauren Hynek and Elizabeth Martin), but it serves to emphasise what an odd choice this is for a family movie. Unless you’re going to introduce a talking dragon. Sure, it supplies continuity to the “Disney Princesses” line – kind of – as a made-to-fit tale that needs no gender swap-outs, even as it provides a humourless gender swap take on Tootsie (Yoson An plays Mulan’s love interest). Okay, more Yentl. There are the expected conflicts between tradition and free expression, and some garbled definitions of chi. There’s also atonement for witchy Xian Lang (Li), suggesting, if Maleficent and Cruella are anything to go by, Disney would have liked to add her to their roster of spin-off prequel movies. You know the ones focussing on the evil women Disney want the current generation of kids to aspire to.

There are a couple of decent action sequences: an acrobatic sparring with An’s Chen Honghui; a strategic avalanche putting paid to the enemy; the initial encounter with Xian Lang. The final fight with Rouran (Lee) is a snooze, though. Harry Gregson-Warner’s score is occasionally rousing. Mandy Walker’s cinematography makes the most of actual locations (and doubtless a host of CGI touch ups). Mostly though, Mulan feels looonnnng and is an emotional cold fish.

As with a number of pictures that have served to publicise streaming platforms, Disney+ may be fortunate Mulan bypassed theatres, since its crash and burn has been cushioned by subscription take ups (now they’re really pushing it though, with Disney+ Premier Access; subscribe and pay £20/$30 to get first dibs). Probably the most polished of the live action remakes so far – and one of the few that is actually live action – but also characteristic of them in being unnecessary and simply not very good.