Is this a goddamn revolution or not? 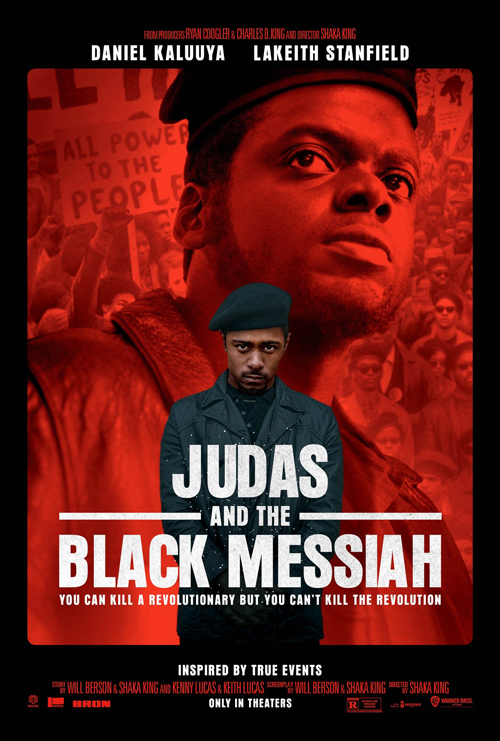 Judas and the Black Messiah
(2021)
(SPOILERS) Several movies in contention for this year’s Oscars concern individuals or groups of individuals targeted by the intolerant or outright diabolical State. It’s an area guaranteed to stir passions and engender indignation – the Woke Oscars have to do their globalist bit – which makes it all the stranger how lacking in urgency these offerings are. The Trial of the Chicago 7, for all its sugar-coated Aaron Sorkin gloss, knows how to push the necessary buttons, but both The United States vs. Billie Holiday and Judas and the Black Messiah are left stranded, dramatic beached whales oblivious to the incendiary events they’re depicting.

Judas and the Black Messiah does finally develop some mettle and drive at the very end, with the raid on Fred Hampton’s apartment. But by then, it’s much too late. Perhaps my expectations, given the material’s potential and the raves, were too high. I naively expected coherent character studies of (Illinois chapter) Black Panther Party leader Hampton (Daniel Kaluuya) and his lieutenant Bill O’Neal (Lakeith Stanfield), the titular Black Messiah and Judas respectively. I expected an attempt to understand O’Neal’s motivation, accompanied by the Donnie Brasco-esque tension of an undercover guy (be that police or FBI informant) maintaining a gruelling deception. I expected an exploration of the relationship between the two men. Shaka King’s film offers at best lip service to such goals. He isn’t even able to energise Hampton’s message. Sure, Kaluuya is given a grand chance to showcase his oratory skills; indeed, Judas and the Black Messiah stops in what tracks it has to indulge Hampton’s largely banal rhetoric. But there’s no sense of his life here, or of his greater impact. Judas and the Black Messiah may as well have been a filmed play.

It doesn’t help that the leads are very actorly presences, further displacing any sense of immediacy into the realm of the performed period piece (not as much as Ma Rainey’s Fat Ass, although there at least excuses to be offered in that case). Or that they are a decade too old for their characters. Which isn’t to suggest either Stanfield or Kaluuya look old old – neither are Warren Beatty in Bugsy laughable – but neither do they seem like twenty-year olds (O’Neill was only seventeen when first approached to be an informant, and if you’re able to relay that, you’ve done much of your groundwork right there). Kaluuya is a fine actor, but he’s unable to locate an interior life for Hampton. It isn’t his fault. Everyone in King’s film – from a screenplay by Will Berson and King, the story credited to the pair and Kenny and Keith Lucas – is similarly thinly sketched. There’s an outline of the key situations, relationships and events, but only rarely is there flesh on the bones.

Stanfield never convinces in the role he’s supposed to be inhabiting (you know, the one other than being the snitch). Indeed, he spends the proceedings wearing his usual all-purpose, sorrowfully egg-bound duck expression. Much more noteworthy are those around the edges of the plot: Dominique Fishback, Dominique Thorne, Amari Cheatom. Martin Sheen adds to the artifice as a prosthetically hooterised J Edgar Hoover, resembling no one so much as Miracle Max from The Princess Bride. Jesse Plemons is outstanding, as ever, as Roy Mitchell, the FBI handler manipulating O’Neal; you respond emotionally to his various dealings, but he’s the only one.

Judas and the Black Messiah feels long. It’s respectful, but overly so, such that it diligently fails to raise a pulse. In contrast to the efforts of Sorkin and Lee Daniels, it appears King’s film is relatively true to the facts. Perhaps it should have been less so, if it would have helped tell a better tale. This relative fidelity serves to make the title seem that much more misplaced; it heightens the nature of the relationship and the decisions made by O’Neill to iconic/mythic proportions; what we see is very ordinary and underpowered.

Another bone to pick is the use of actual footage. It really gets my goat. If you’re going to make a documentary, make a documentary. Don’t throw in some interview footage of the actual O’Neill at the very end as a cheap device to demand “This is real, you know” respect from the viewer. Spike Lee habitually pulls that card, although in his case, it simply makes his content look more laughable. With King’s film, it serves to emphasise how dramatically undercooked the proceedings are, and how Stanfield hasn’t risen to the challenge. I noted this is also the second of this year’s Best Picture Oscar nominees where Bobby Seale hasn’t been able to catch a break. Judas and the Black Messiah has an excuse, at any rate.

Of which – Oscar nominations – I won’t be too surprised if Judas and the Black Messiah goes home empty handed. Kaluuya appears to be favourite to take Best Supporting Actor, but squaring off against his co-star may let someone else through. It has no chance at Best Picture, and both Original Screenplay and Cinematography look like outside chances. Best Original Song? Perhaps. That would be the level of mediocre recognition the picture deserves.