The acoustics aren’t good when you’re singing on top of a frog. 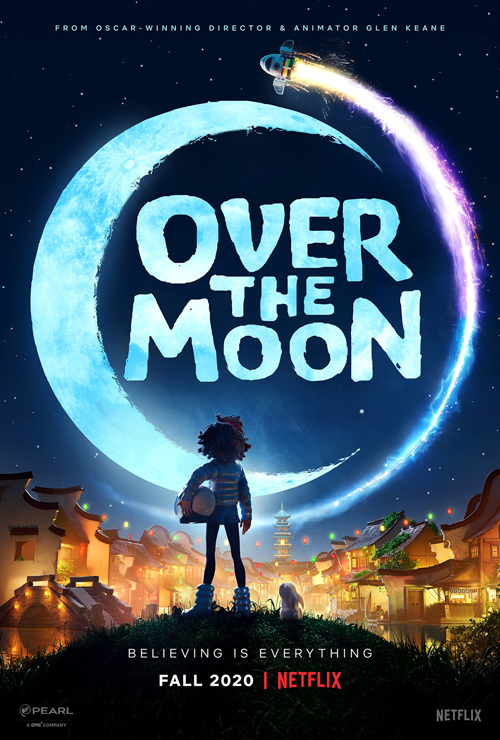 Over the Moon
(2020)
(SPOILERS) What the hell is this turgid piffle? The type that somehow musters Oscar nominations for Best Animated Feature, it seems. Here we find Netflix with one eye on the future, nursing dreams of further – yes, further! – avarice. Because this is a Chinese co-production. You know, Netflix which isn’t available there. Likely because the maker of Cuties is rightly regarded as a corrupting influence. Or because China took a look at their output and decided (rightly again) they aren’t missing out. Besides, with a transhumanist communist utopia on the horizon, why even bother? Soon all the world will be following their example. Over the Moon did earn a cinema release in China, however. And like Mulan, only more so, it made bugger all.

On the plus side – if you’re concerned about bad publicity – Over the Moon’s riff on a young teen’s obsession with a Chinese Moon goddess has failed to warrant the tirades of cultural insensitivity that beset Mulan. On the minus, it has garnered almost no attention at all. I’d have hazarded that hardly anyone knew of its existence prior to the Oscar nod – I certainly didn’t – but it was Netflix’s most streamed production on the weekend of its release. Apparently. Whatever that actually means. Who knows how many people didn’t watch it subsequently. Or gave up in disgust at this insipid dross after twenty minutes. Given the cachet the Woke Oscars don’t have – even less than its former guise as the Self-Congratulatorily Cringe-Inducingly-Liberal Oscars – I doubt there’s going to be a sudden resounding uptick in awareness.

Fei Fei has lost her mother, who used to tell her stories of Moon goddess Chang’e (who in turn lost her lover Huyoi) at the annual Moon Festival. On which occasion, they’d make mooncakes. All very commendable and culturally observant, but where’s the drama? Well, fast forward a few years and dad is seeing another woman, who comes with a really annoying son. Naturally, Fei Fei is rather put out. So, believing in the fantasies she was told about the Moon – as opposed to, you know, the fantasies we are told about the Moon, by authorised astronomers and the like – she decides to build a rocket and in no time at all has blasted off to prove the goddess is real.

While the movie is dull up to this point, I was at least slightly optimistic that it had now decided to shake off its shackles of all-consuming domestic squalor (and indeed, Fei Fei mercifully fails to awake at the end to discover her fabulous flight was but a dream). Unfortunately, Over the Moon opts to exchange the humdrum for a Day-Glo luminescent lunar nightmare of inconceivable proportions. The design of Glen Keane’s movie – Keane being a veteran from ’70s Disney movies and even Star Trek: The Animated Series – is as typically anodyne as you’d expect from anyone restricted to the CGI field; there’s a brief gasp of 2-D stylisation when Chang’e’s story is told, but that’s right at the beginning.

The Moon, after it has been introduced looking exactly like the TV studio set you’ll be most familiar with, is a blinding fusion of undifferentiated colour, producing a rather unpleasant sickly sensation. Even more unpleasantly sickly is the attempt to fashion an under-powered, Frozen-esque sing-a-long, with a selection of wannabe-uplifting anthems and inadvisable electropop vomits.

There were numerous opportunities here. I mean, to its credit, Over the Moon gets fully behind the Moon as a magical realm rather than simply a dusty rock (Wait, is that the lunar rover? Well, it’s probably as good an imitation as any). Building a rocket to the Moon was, after all, an ideal opportunity to deconstruct NASA, and it’s – quite believably, frankly – only through the intervention of some magical lion spirits that Fei Fei lands safely. There’s the occasional opportunity for something trippy – the sequence in which Fei Fei steps over the threshold into Chang’e’s veil of sadness, and so too becomes afflicted – and the occasional engaging sequence – “bikers” steal Fei Fei’s gift for the goddess and she gives chase – but they’re few and far between.

And there are a couple of fun characters in Over the Moon: a glowing pangolin; a devoted bunny (you know, in the way animals are always much more appealing than humans in animations, and yet animators still feel impelled to tell their tales mostly about humans). Fei Fei inevitably comes to accept her new family, and all is well. Well, except that she left her rabbit behind (to shack up with a hare! It’s bedlam, I tell you!) And now she has a dog. Why not a cat? What does she have against cats?