They want to destroy me. He wants me to stop singing what’s in my soul. 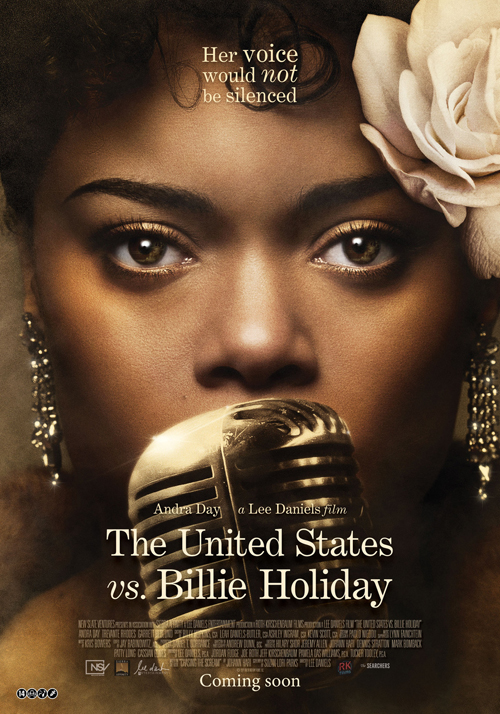 The United States vs. Billie Holiday
(2020)
(SPOILERS) Well, full marks to Andra Day for that biopic rarity, a performance of a historical figure that feels naturalistic rather than studied or mannered (step forward, Rami Malek). Unfortunately, that doesn’t make the rest of Lee Daniel’s Billie Holiday biopic less than rambling biographical sludge. You’d have thought there was more than enough story to tell here – and the title The United States vs. Billie Holiday frames the proceedings with apparent intent – to avoid a simultaneously ludicrous and banal made-up love story, yet it forms the preponderance of the picture. Was this movie supposed to be about Holiday, or was it really about federal agent Jimmy Fletcher?

This is the first Daniels film I’ve seen since Precious; maybe I should have check out those inbetweeners, since The Paperboy sounds at very least gloriously awful, in a Razzies kind of way. Any thoughts that The United States vs. Billie Holiday might buck the trend of torpid true-life fare are soon dashed. It might even have been preferable had Daniels been stricter about adhering to the strung-together-incidents approach of the typical biopic, since the inventions and flights of fantasy (a heroine-induced flashback) are melodramatic miscues rather than the kind of deranged lunacy we might perversely relish from Baz Lurhmann, say (which is about the only reason to investigate his forthcoming Elvis movie, aside from Guantanamo Hanks).

The opening crawl sets the scene for potent and charged political content, with the 1937 anti-lynching bill failing to pass and the Federal Bureau of Narcotics out to nail Holiday for her signature tune, the lyrics of which describe lynching. But the picture immediately encounters problems attempting to make her more of an activist than she was. If you’re going to angle this as the (in his prime) Oliver Stone movie about Billie Holiday, then do that. Daniels and screenwriter Suzan-Lori Parks squander their opportunities for creating drama and tension and instead manufacture elements that douse the available sparks.

Garrett Hedlund’s profoundly racist Federal Bureau of Narcotics commissioner Harry J Anslinger might have been grist to Daniel’s case, but he’s hardly in it (and Hedlund doesn’t exactly ooze anything, even when looking stern or spouting bigotry). Instead, the government’s focus on Holiday is via narcotics agent Jimmy Fletcher, personified as gimlet-eyed bloc-of-wood Trevante Rhodes. Holiday somehow finds this charisma vacuum irresistible, and soon their relationship has swallowed up the lion’s share of the plot.

Inventing a love story for a biopic is neither that unusual nor necessarily a problem; it’s simply the old yardstick of whatever tells the chosen tale best. So yeah, if you want a tale about Fletcher, rather than Holiday, this move makes sense. But aside from the real Fletcher expressing guilt for his part in Holiday’s persecution and demise, the kid-gloves approach to character, to the point of repurposing him as something of a hero who intentionally spoiled evidence in one of her court cases and was even there for her on her death bed, seems rather odd. I might give Daniels some credit were there a whiff of chemistry or passion between these two, but the over-polished subplot hangs on like a limp lettuce waiting for the waste-disposal unit.

Inevitably, Daniels puts the emphasis on Holiday’s suffering – it seems the real singer was not one to let the negatives overwhelm her – with her being knocked around, framed, suffering the psychological effects of formative traumas and a duck to the water of substance abuse; that’s the narrative that sells in Hollywood, so showing a soul who was also able to fly would have been antithetical to the intended finger-waved lesson. The consequence is a picture that falls in line, with little to distinguish itself beyond the lead performance.

It’s curious too where Daniels exercises restraint. He includes Holiday stripping when arrested, yet leaves out her piece-de-resistance act-of-defiance pissing on the floor. Tallulah Bankhead (Natasha Lyonne) features, but their affair is merely alluded to. Daniels seems more intent on fabricating his own “lively” Holiday milieu of kindly federal beaus, flamboyant entourage (Miss Lawrence) and equally flamboyant interviewers (Leslie Jordan, very amusing). Occasionally, a scene takes on its own life (Fletcher expresses his condolences at a memorial service Holiday is attending; “It was her dog! Her dog died!” wails Da’Vine Joy Randolph’s Roslyn). But it’s the exception.

Day’s The United States vs. Billie Holiday performance has received a deserved Oscar nomination, but she seems to be trailing the pack. Not as far behind as Vanessa Kirby, but still odds-against. One need not star in a hit film about a drug-addicted singer-performer to waltz off with the statuette (see Renée Zellweger last year), but the relative novice to the field tends to receive recognition in the supporting categories rather than the lead. Viola Davis’ frantic mugging, Frances McDormand’s elder and hip-shooting Academy statesperson and Carey Mulligan’s Charles-Bronson-in-diapers turns all seem more likely bets. I’d also have suggested Daniels was in no danger of troubling the Academy for Best Director nominations now or in future, but he’s already received one. And if Tom Hooper can win a directing Oscar, anyone can.