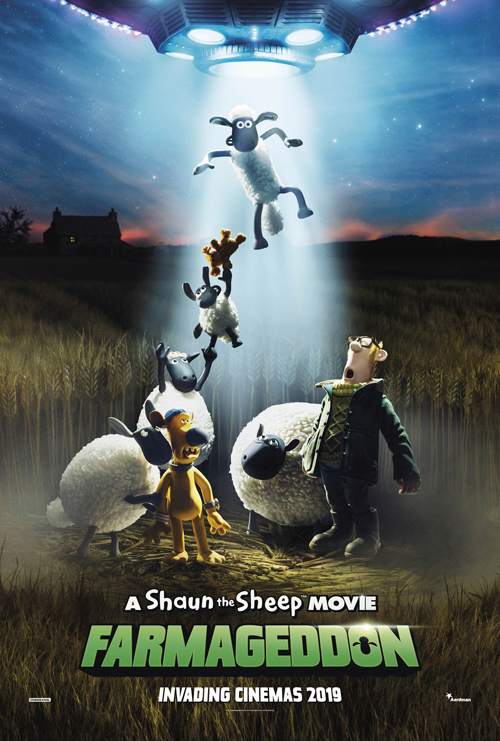 A Shaun the Sheep Movie: Farmageddon
(2020)
(SPOILERS) One might reasonably suggest the recourse of the ailing or desperate franchise is to resort, seemingly out of nowhere, to space aliens. Even Police Academy didn’t go that far (to Moscow, yes, but not to space). Perhaps animators think kids have no skills of discernment and will swallow any old sugar-coated crap. Perhaps they don’t, and they will. Ice Age had been enjoying absurd success until Collision Course sent Scrat spinning into the cosmos and grosses tumbled. Shaun the Sheep has been around for a quarter of a century, but this is only his second movie outing and already he’s pulling an E.T. on us. Of course, this may all be part of the grand scheme, and Nick Park is simply doing his bit to familiarise the tots in time for Project Blue Beam.

I feel a bit of a killjoy when it comes to these Shaun movies, as I see them as coasting rather and failing to offer a patch on the carefully honed plots and inspiration found in Wallace and Gromit. And indeed, Aardman generally, at their finest. And Shaun… I mean, he’s not all that, is he? Now, a franchise featuring Feathers McGraw… Particularly annoying is the manner in which, to get over essentially under-expressive sheep faces, Aardman’s animators have the sheep mouths pop out from the side of their faces like some unpleasant Cronenbergian body-horror interface. But then, Aardman have never been the greatest whizzes with character design, as non-descript alien Lu-La evidences. This also applies to the Wallace and Gromit stand-ins of dog Blitzer and Farmer John (I do like the enduring density of the Farmer, however, probably the best character here).

Where the premise of the first movie was innocuously redundant – Shaun’s day out – Farmageddon’s derivative nature is actively irksome. Cute little bu-ba, I mean Lu-La alien lands on Earth having foolishly taken her parents’ saucer for a spin. Shaun makes bezzie mates with her. Meanwhile, Mossingham is rife with UFO fever and the Ministry of Alien Detection, led by Agent Red (who is mean but just wants to be believed, having seen aliens as a child, aw), is called in.

There’s more than enough room for sight gags and riffs from a host of TV and movies we’ve seen riffed on many times before – Close Encounters of the Third Kind, 2001: A Space Odyssey, The X-Files, Men in Black, E.T., Star Trek, The Hitchhiker’s Guide to the Galaxy, Back to the Future, Aliens, a rover that resembles Johnny 5 – and this element, despite being dusty in subject matter, is entertaining enough in that likeable Aardman way.

Being a curmudgeon, though, I found zero to get behind with Shaun or his alien chum. Particularly off putting is the tendency to stray into music montage sequences. One of which, perhaps surprisingly and doubtless fuelling a future generation of class A-inhibited Glastonbury attendees, is the Farmageddon Mix of The Chemical Brothers’ Out of Control (to the visual accompaniment, appropriately, of the spaceship run amok). In response to which, MAD’s UFOs Caught Counter, which had just risen from 0000 to 0001, accompanied by hearty cheers, returns to 0000 again.

There’s a run of decent gags, naturally. The alien’s sugar rush in a supermarket is mildly amusing, as is Jaws in a frozen food unit (and the hatred of broccoli). A belch heard on the savannah (there are inevitably some other vulgar gags, including scrubbing the dog’s bollocks, Johnny 5 shitting paper and the alien needing the toilet). There’s a literal Bull in a china shop. A gag about which way up the world should be viewed in order to recognise it from space. Scratching the paintwork on the ISS. A crop circle caused by a runaway combine harvester. References to Roswell and Rendlesham Forest (well, Mossingham Forest). The sheep disguise themselves as Daleks (well, deadly dustbins). And the Fourth Doctor (or someone dressed as him; difficult to discern with Aardman designs) emerges from a portaloo, takes fright and retreats within again. On the debit side, it also gives Brian Cox, about the most sci-fi thing in the movie, publicity in an end-credits gag.

The most sustained antics comes from Farmer John’s alien-theme park, or barn, Farmageddon. He has his sights set on the purchase of the Wheatchopper 5000, so no expense will be spent coming up with a third-rate entertainment. Farmageddon thus includes a chicken with deely boppers and Martian pigs, while Farmer John re-enacts the initial close encounter as a stage show (shades of Thor: Ragnarok?).

A Shaun the Sheep Movie: Farmageddon continues the slump in Aardman’s movie output that began after the (very good) Pirates! movie nearly a decade ago. I can see why they’re returning to the Shaun well – particularly after Early Man bombed – but it really is their equivalent of lowest-common denominator fare. I’d like to see them get creative again, but unfortunately Chicken Run 2 is next up.