It says this room is five feet longer on the inside than it is on the outside. 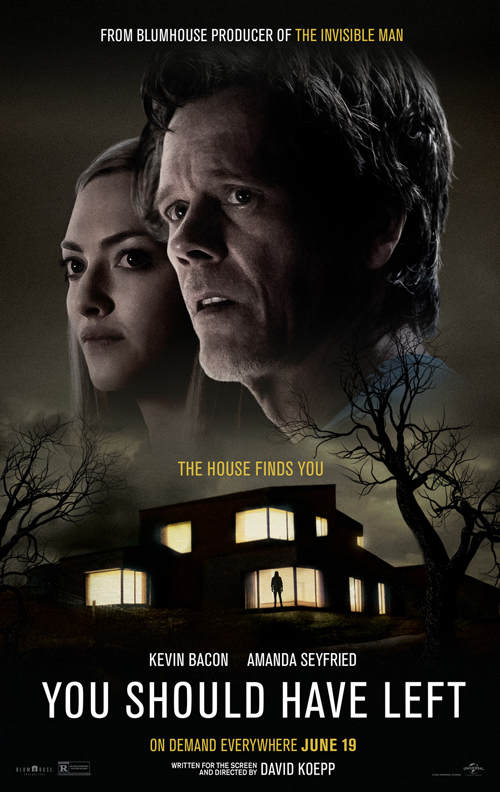 You Should Have Left
(2020)
(SPOILERS) I’m always interested to see a new David Koepp movie – yes, even his misfiring comedies – since they tend to be much more engaging than his writer-for-hire work. You Should Have Left finds him back in the horror zone, where he eked out his first big hit in 1999 (Stir of Echoes, which was unfairly eclipsed by The Sixth Sense’s behemoth box office). Koepp duly knows his way around unsettling atmospheres and creepy moments, but You Should Have Left’s overfamiliarity ultimately scuppers it.

And that overfamiliarity can be found in the director’s own filmography. Stephen King adaptation Secret Window (SPOILER) depicted protagonist Johnny Depp holed up in a cabin retreat and eventually revealed as the culprit behind the murders taking place. You Should Have Left depicts protagonist Kevin Bacon holed up in a Welsh retreated and eventually revealed as the culprit behind a murder that has, many years later, instigated the untoward goings-on.

One might wonder quite why Koepp was inspired to adapt Daniel Kehlmann’s 2016 novella, then. Anything to get back in the game after Mortdecai left an unholy stink, perhaps (yes, I quite liked it, but most did not). It appears the germ came from wanting to collaborate with Bacon on another scary movie and a cheap one (it’s a Blumhouse picture, so of course it is). Then came the “fraught marital relationship” between Bacon’s retired banker Theo and much younger starlet wife Susanna (Amanda Seyfried); the novella came into play at Bacon’s suggestion (Koepp demurred at making Theo a screenwriter per the original, which would have allied it even more with Secret Window).

And the domestic side is well sketched out. The underlying tension between Theo and Susanna is playfully and then increasingly fractiously portrayed. Bacon and Seyfried make this work, even if I half expected Bacon to launch into an ingratiating pitch for EE Mobile every few minutes. Most impressive is Avery Essex as daughter Ella, however, never striking a duff note. They’re largely it, cast-wise (when Susanna leaves, it’s just Theo and Ella for a significant stretch).

If only Theo had watched The Owl Service, he’d know visiting Wales is never a good idea. Cue cryptic locals (Colin Blumenau’s shopkeeper, in particular), local legends (“The devil builds the tower to collect the souls, and God destroys it”) and increasingly sinister incidents at the house. Nightmares and scrawled warnings (“LEAVE. YOU SHOULD LEAVE NOW”) fuel encounters with spooky and disorientating corridors and geography. There’s the old favourite of the ominous Lynchian picture featuring an open door on the wall, and the discovery that the house is bigger on the inside than the outside.

Koepp is in confident territory, and some of his choices – the self-help meditation tape Theo is listening to that is doing nothing to ease his state of mind – are especially effective. Unfortunately, while he starts from a strong position with the domestic arrangement, he can’t distract from the underlying staleness of the plot. It’s never in any doubt that, when Theo and Ella leave the house on foot in the middle of the night, they’re destined to loop back there again. Likewise, the surprise would have been if Theo wasn’t culpable. You Should Have Left to often feels like Koepp repeating himself, rather than doing what he does best, inventing.