You think I’m just a gravy-train rider with a turn-around collar. 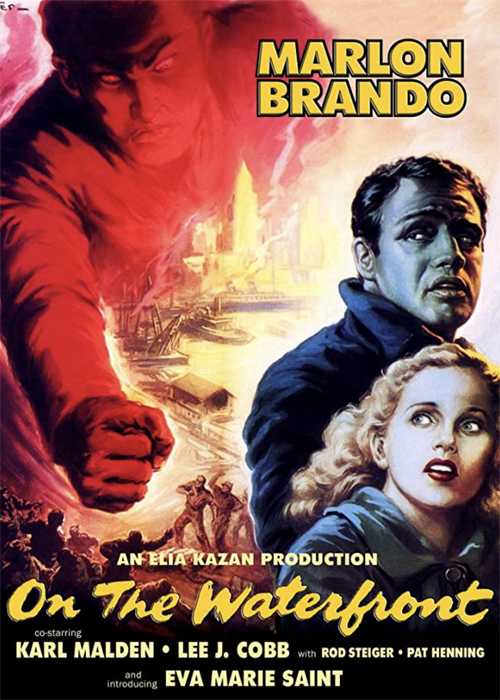 On the Waterfront
(1954)
(SPOILERS) Commonly celebrated for one of the all-time great performances in one of the all-time great films, On the Waterfront has never done a whole lot for me. It’s never been a contender for my all-time Top 100, let alone Top 10. It may have heralded a magnificent new wave of realist cinema at the time, a harbinger for the beating down of taboos to come, but Eli Kazan’s tale of a noble informant exposing waterfront racketeering is extraordinary creaky in its theatricality, especially so for a picture made almost entirely on location. And Brando’s wow performance is an exercise in mannered artifice, standing out like a sore thumb amid a sea of diligent, driven co-stars.

On the Waterfront is, of course, as significant for its behind-the-scenes architecture. Kazan had testified – dobbed in friends and colleagues – to the House Un-American Activities (as had writer Budd Schulberg). The events of the film, effectively equating mob enforcement with dread commies, thus acts as a “vindication” of Kazan’s actions. Thrown in the mix is an attack on Arthur Miller (specifically the stance of The Crucible), who refused to work on the picture for the reasons of Kazan’s unseemly acts (it’s said Brando did not want to make the movie initially for similar reasons, “his distaste for a ‘songbird’ – per The Secret History of Hollywood’s Academy Awards –but his appreciation for Kazan as a director ultimately enabled him to traipse lightly over that little moral quandary. Others were not so easy to assuage, the likes of Ed Harris and Nick Nolte keeping their seats when Martin Scorsese presented Kazan with an Honorary Oscar in the 1999).

Pauline Kael called it “one of the most powerful American movies of the 50s, and few movies caused so much talk, excitement and dissension – largely because of Marlon Brando’s performance as the inarticulate, instinctively alienated bum Terry Malloy”. It’s certainly a distinctive performance. I don’t, however, thinking it’s one that particularly benefits the film or the character, serving instead to emphasise the illusory nature of the enterprise. You can see Brando ACTING his every moment, picking and choosing his truth in the kind of eccentrically self-entitled fashion that can only come from an indulged and pampered belief in his own greatness and importance.

That scene between Terry and his brother Charley (Rod Steiger) gets all the raves, but I feel rather sorry for Steiger, whose work is entirely seamless and who hits the real emotionally resonant notes earlier, when he pleads over his orders (“Johnny, he’s my kid brother”). When Terry responds to a gun pointed at him with “Oh, Charlie”, it’s Brando indulging a bit that has nothing to do with character authenticity and everything his actorly ego. Is his performance mesmerising? Yes. But not in a way that’s germane to the proceedings, but because Brando’s always interesting to watch, even when he’s terrible. Often, it doesn’t matter too much if he seems like he’s in his own special movie, but here – I assume – there was some intention towards verisimilitude.

Although, you can never be too sure. Steiger and Lee J Cobb – as mob-infused union boss Johnny Friendly – are utterly riveting, the latter a terrifying vision of combustible fury. Eve Marie Saint is affecting in a way that may surprise anyone only familiar with her North by Northwest role (it earned her an Oscar). Karl Malden, however, is burdened over double with the venerably righteous priest part (but he drinks and uses his fists, so he’s a real person). All three – Steiger, Cobb and Malden – were nominated in the Best Supporting Oscar category, so allowing Edmond O’Brien to sneak through.

Time Out’s Geoff Andrew considered the movie was let down by the religious symbolism “that turns Malloy not into a Judas but a Christ figure” (that, and Kazan and Schulberg using it as a statement of justification for their actions). I was more put off by the efforts to turn things around for a happy ending, the workers rallying against Johnny while Terry, beaten but not bowed, drags himself absurdly across the dock. All the while accompanied by that godawful Bernstein score that somehow finds a dramatic crescendo appropriate for a character walking across a room (bafflingly, this was one of the eight Oscars the picture won).

Kael called On the Waterfront “A near-great film”, but it’s far from that. Kazan does his darnedest to divorce us from the drama, reserving it all the relish of a filmed play and making the authentic locations strangely disorientating. Season Two of The Wire this is not. Curious to note that, for two years in a row, the Academy awarded Best Picture to movies with retired boxers as the protagonists. On the Waterfront is definitely punching above its weight, hallowed legacy or not. 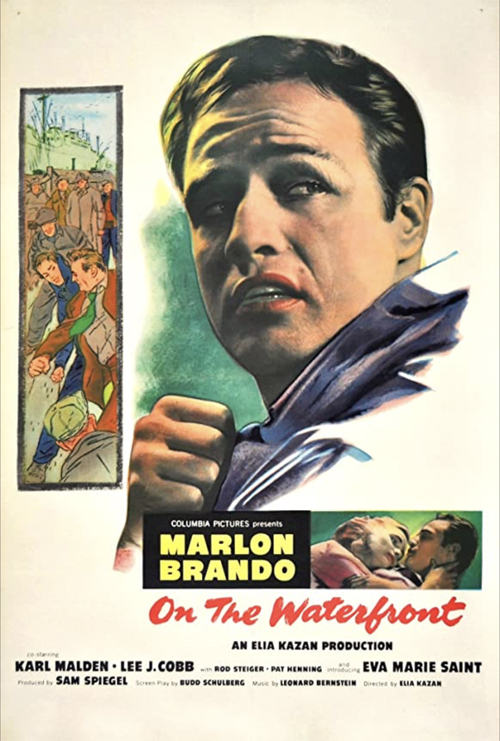 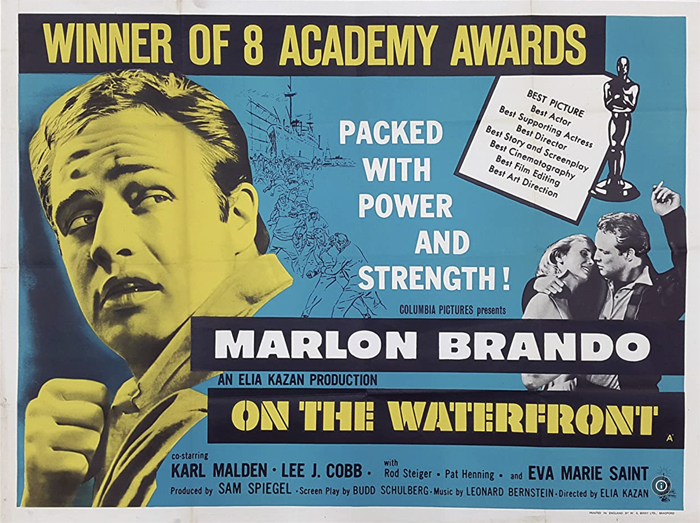