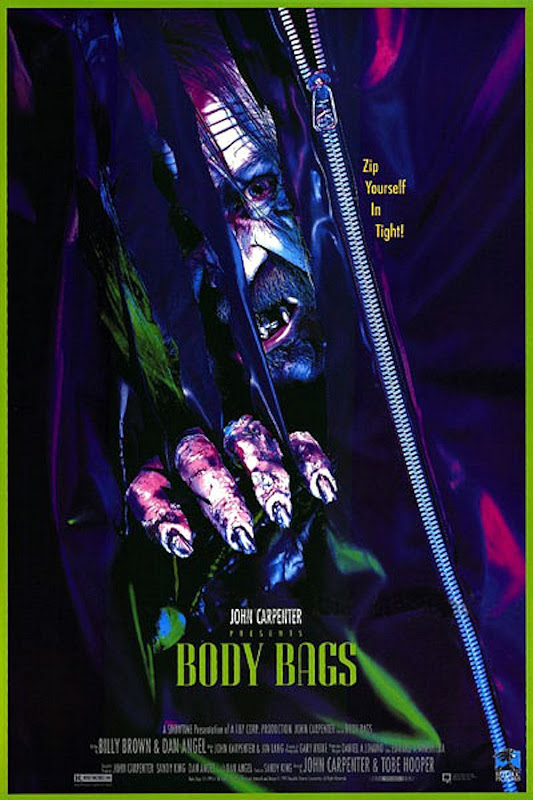 Body Bags
(1993)
(SPOILERS) I’m not surprised Showtime didn’t pick this up for an anthology series. Perhaps, if John Carpenter had made Coming Home in a Body Bag (the popular Nam movie series referenced in the same year’s True Romance), we’d have something to talk about. Tho’ probably not, if Carpenter had retained his by this point firmly glued to his side DP Gary Kibbe, ensuring the proceedings are as flat, lifeless and unatmospheric as possible. Carpenter directed two of the segments here, Tobe Hooper the other one. It may sound absurd, given the quality of Hooper’s career, but by this point, even he was calling the shots better than Carpenter.

Carpenter also appears as the cadaverous presenter, a Crypt Keeper, if you will, only in the morgue. Not only is his presence less than endearing and his jokes lousy, but he reminds one unpleasantly of Alex Cox crossed with the Lon Chaney Phantom of the Opera.

The trio of tales were written by Billy Brown and Dan Angel, who appear to have enjoyed fairly solid TV careers, although The X-Files episode All Souls (Brown) is the only one with which I’m familiar. Each of the three follows the expected bad taste/humorous/horror/quirky twist format you expect from these anthology shows or movies (I’m not generally a massive fan because of this, but there are exceptions). Indeed, I’d resisted visiting Body Bags this long because the combination of anthology and Kibbe just seemed too great an opportunity not to avoid.

One thing I’ll say for it: there’s an interesting selection of cameos and guest roles throughout, which manages to distract at points from the sheer persistent, underwhelming nature of the material and execution. The first tale, The Gas Station, finds the night shift attendant (Alex Datcher) menaced by various creepy types before an actual machete-wielding psycho slasher (Robert Carradine; of course, it’s a Carradine), the one she assumed was the previous gas station shift worker, makes his presence known. The visuals are ghastly, but a string of cameos from Wes Craven, Sam Raimi, Carpenter regular Peter Jason and American Werewolf David Naughton just about keep this watchable. 5/10

Hair is the wacky episode, with Stacy Keach obsessed over his balding thatch and taking desperate measures – David Warner’s hair transplant method – to remedy the situation. Before long, he’s growing hair everywhere, including internally, and it’s revealed that his new locks are actually alien parasites taking over human bodies. All fairly stock-twisted, although the serpent-like aliens, erupting from human hosts and continuing to move when severed, did rather put me in mind of Morgellons. Also appearing are Debbie Harry as a nurse and Sheena Easton as Keach’s girlfriend. Eclectic casting, to say the least. 4/10

The final vignette Eye is the Hooper one, and if it’s a hackneyed riff on Body Parts and The Hand, it boasts an entirely dedicated performance from Mark Hamill. He’s in full swivel-eyed Michael Biehn in The Abyss mode as a baseball star who opts for an experimental eye transplant (another transplant), only to discover the peeper belonged to a death-row killer. Cue violent tempers and designs on murdering his wife (Twiggy!) Of course, there’s good reason to be suspicious of transplant surgery (investigate those who report significant changes in tastes, behaviours and interests for starters), even if it’s extremely “unscientific” to suggest as much. No prizes for guessing how Hamill resolves his situation. Charles Napier (a Corman and Jonathan Demme regular) and Roger Corman also cameo. 5/10

The coda features Tom Arnold and Hooper as Carpenter gets back in his bag. Ho-ho-ho. This isn’t as ghastly as the auteur’s later Masters of Horror contributions, but were it not for the unexpected miracle of the following year’s In the Mouth of Madness, I’d suggest he should have hung up his directing spurs after Memoirs of an Invisible Man.