Evolution has its dead ends. 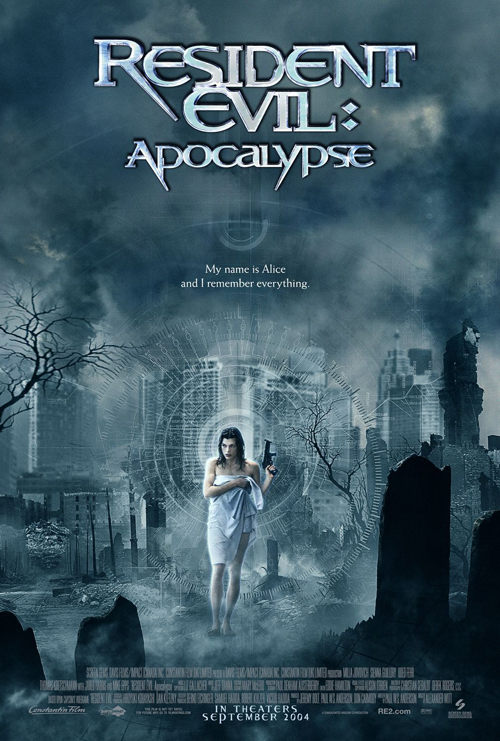 Resident Evil: Apocalypse
(2004)
(SPOILERS) Well, that takes some doing. Resident Evil: Apocalypse is discernibly inferior to its less-than-stellar predecessor in almost every respect. Most of all, though, it’s absolutely horridly directed by debut feature helmer Alexander Witt. There’s zero sense of understanding of the frame or how a picture is edited together on display, leading to a disjointed, fractured mess even without the typically disjointed, fractured mess of a Paul WS Anderson screenplay. The strangest thing is that Witt was no ingenue on the directing front; he was an established second-unit director and DP, extending all the way back to Speed. Perhaps everything he shoots for second unit is conceived as a disjointed mess, only to have form when combined with the named director’s work… hence the devasting combination of double the deficits in Apocalypse.

Either way, Witt hasn’t helmed a picture since, so he either realised he sucked at putting one together or… No, that’s the best I can come up with it. Apocalypse fills us in on the Raccoon City fallout before catching up with Milla’s Alice. Cue MKUltra close-ups of eyeballs and lazy use of variable shutter speeds. Witt has no concept of building a scene, let alone a movie. Hence the blunderingly extravagant stunt where Alice leaps through a church window on a motorbike for no discernible reason, in so doing saving new characters including cop Jill Valentine (Sienne Guillory decked out determinedly like a computer game avatar).

Valentine being bona fide from the games, Guillory will return in later sequels, as will Oded Fehr (best known for The Mummys) as Carlos Olivera. Thomas Kretschmann is the main villain, but he’s so unrepentantly and unremarkably mean, there’s little much moustache-twirling fun to be had from him. Jared Harris is the wheelchair-bound dad who developed the T-virus for noble purposes (isn’t it always the way?) and is striving to get his daughter safely out of the city. Also on hand are Mike Epps, Sandrine Holt and Iain Glen, the latter paving the way for a larger role beginning in the third movie.

One might suggest it’s a blessed relief that Apocalypse opts for a tangible Big Bad this time – rather than a CGI one – but when that tangible Big Bad turns out to be a lumbering buffoon, a knock-off of every Alien/Venom fanboy’s wet dreams in features and with all the presence of a foe from a late 80s/early 90s Terminator/Robocop ripoff starring Dolph or Jean Claude, one would probably be wide of the mark. Nemesis may hearken from the games, but that doesn’t make him any good. The idea that he doesn’t kill harmless targets (Epps’ LJ) is maybe funny once, but the rest of the time, you’re wondering how he got through the admittedly non-existent quality control.

There are some zombie dogs, so Anderson obviously thought they were successful last time (to be fair, they were, probably because they aren’t CGI). There are also some demon cannibal zombie kids, which is always edifying. Although, I was increasingly given cause to wonder if these zombies really actually eat anyone, since we invariably see victims return with a few chunks removed but no one wholly or even mostly devoured.

Mainly, however, I was struck by the thought that Apocalypse is almost a parody of bad action movies. That it did decent business (making more money than its predecessor) suggests there’s good reason for producers to be cynical about undiscerning audiences when it comes to the horror genre.

On a thematic level, we see urban centres overrun and “sanitised”, while the Elite barricade themselves in, waiting for the horrors they have unleashed to blow over. There’s much in the way of genetic mutation (Alice’s “infected on a massive level”), such that by the end she’s causing nosebleeds with her psi abilities, but little one could say was directly transhumanist; this narrative is more focussed on population control, while Alice herself is revealed as absent of freedom of choice and action, despite her superhuman status. The old favourites of satellite and nuke cons are present and correct, such that Army of the Dead would borrow the scorched-earth countdown device recently.

Resident Evil: Apocalypse is wretched and risible; when a ninety-minute movie feels looooong, you know something is very seriously wrong. Fortunately, salvation, or rather Extinction, would be just around the corner.