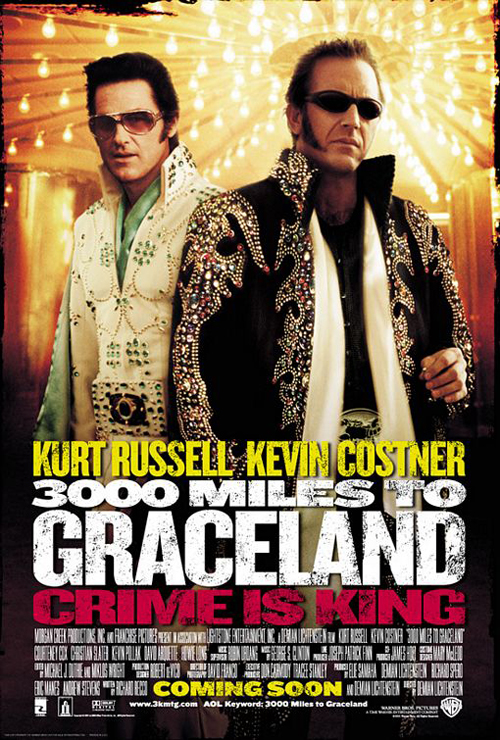 3000 Miles to Graceland
(2001)
(SPOILERS) The kind of movie that makes your average Tarantino knockoff look classy, 3000 Miles to Graceland is both aggressively unpleasant and acutely absent any virtues, either as a script or a stylistic exercise. The most baffling thing about it is how it attracted Kevin Costner and Kurt Russell, particularly since both ought to have been extra choosy at this point, having toplined expensive bombs in the previous half decade that made them significantly less bankable names. And if you’re wondering how this managed to cost the $62m reported on Wiki, it didn’t; Franchise Pictures, one of the backers, was in the business of fraudulently inflating budgets.

Even a price tag of $47.4m seems waaaay too high for this dreck, though. Demian Lichtenstein, perhaps significantly, has never been heard of again as a movie director (IMDB references “a vast body of work in the music industry” which may explain the hideous metal garbage soundtrack accompanying any action “sequence” – I say sequence, because the choices of shots and edits are so egregiously incontinent throughout, one might assume he was actively attempting to create a dramatically incoherent movie. It seems, at some point, that Lichenstein was divested of this burden, as both Costner and Russell commandeered duelling cuts, the latter favouring a more humorous tone while Costner was more action-focussed. Dances with Clams won out.

But alas, Costner didn’t win off his Golden Razzie nomination for Worst Actor (one of five including Best Picture, Courtney Cox and screenplay, all of them legitimate in this instance). He is pretty awful here, though, pursuing his previously nascent desire to indulge the antihero (A Perfect World, Revenge, Waterworld) with a full-blown psycho. That might not be so bad, were Murphy an interesting psycho, but if Kev was able to add something to the noble hero (The Untouchables, for example), his scumbag is strictly one-note and rather dull.

Russell fares a little better, but not a lot, his Michael Zane required to romance/hate/be made a fool of by Cox’s Cybil and bond with her son (David Kaye). He at least gets to reprise Elvis (1979) over the end credits, striking a pose and lip-synching to the King. The casting is generally shockingly wasteful. David Arquette farts and dies. Bookeem Woodvine gets all kill crazy in Vegas and dies. Christian Slater, beginning a competition with Sean Bean (see also Windtalkers and Mindhunters) gets obstreperous with Costner and dies. Kevin Pollak and a pre-Sideways Thomas Haden Church are US Marshals hunting the felons. Ice-T shoots people upside down. Jon Lovitz is a money changer with a room full of stuffed animals.

I never bothered to check this out hitherto because I heard it was dreadful – it went straight-to-video in the UK – but I figured: it’s got Kurt and Kev in, it can’t be all bad, can it? It can, and it is, though. It’s the kind of movie that makes you think Costner entirely deserved to fall off his perch. And that Kurt, who never seemed overly invested in the star thing, simply had zero good taste (see also Escape from L.A., Poseidon, Death Proof). It would have been wisest just to stop watching as soon as the uber-rubbish CGI scorpions start duking it out over the opening credits. The rest of the movie is equally ugly.

August 14, 2021
Vampires aka John Carpenter’s Vampires (1998) (SPOILERS) John Carpenter limps less-than-boldly onward, his desiccated cadaver no longer attentive to the filmic basics of quality, taste, discernment, rhyme or reason. Apparently, he made his pre-penultimate picture to see if his enthusiasm for the process truly had drained away, and he only went and discovered he really enjoyed himself. It doesn’t show. Vampires is as flat, lifeless, shoddily shot, framed and edited as the majority of his ’90s output, only with a repellent veneer of macho bombast spread on top to boot.
Post a Comment
Read more

Maybe I’m a heel who hates guys who hate heels.

September 08, 2021
Crimewave (1985) (SPOILERS) A movie’s makers’ disowning it doesn’t necessarily mean there’s nothing of worth therein, just that they don’t find anything of worth in it. Or the whole process of making it too painful to contemplate. Sam Raimi’s had a few of those, experiencing traumas with Darkman a few years after Crimewave . But I, blissfully unaware of such issues, was bowled over by it when I caught it a few years after its release (I’d hazard it was BBC2’s American Wave 2 season in 1988). This was my first Sam Raimi movie, and I was instantly a fan of whoever it was managed to translate the energy and visual acumen of a cartoon to the realm of live action. The picture is not without its problems – and at least some of them directly correspond to why it’s so rueful for Raimi – but that initial flair I recognised still lifts it.
Post a Comment
Read more