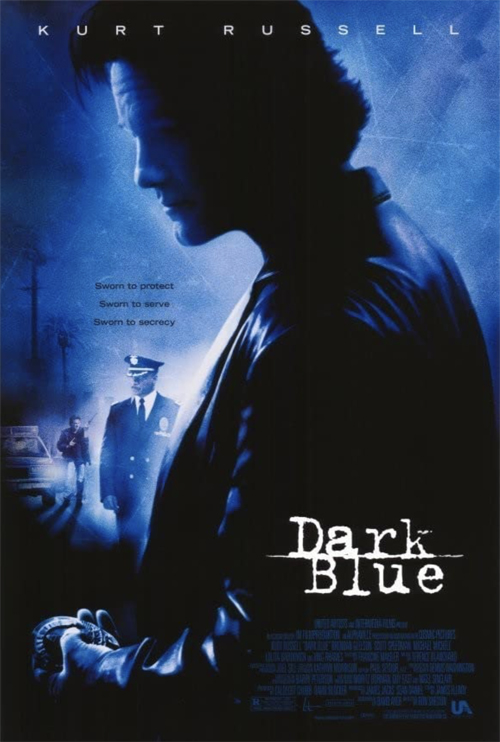 Dark Blue
(2002)
(SPOILERS) There are a plenty of positives to be found in Dark Blue, not least a first-rate performance from Kurt Russell, but it’s fatally undermined by the attempts of David Ayer (adapting James Ellroy’s original) to reposition events against the backdrop of the Rodney King verdict and the LA Riots. The result reads as your typical ivory-castle manoeuvre of striving for real-world resonance but succeeding only in drawing attention to the artifice of the genre, the characters, the plotting, and the big-name actors. Positioned as another police corruption drama from the writer of L.A. Confidential, it’s an engrossing movie. As a piece of socio-political commentary, it’s an abject failure.

Ellroy said Ayer entirely rewrote his screenplay The Plague Season, set during the Watts Riots (namechecked by Russell’s character here), which certainly explains some of Dark Blue’s less subtle strokes and points the finger of blame for its most egregious decision squarely at the Suicide Squad, Sabotage and Bright director. Dark Blue received significant acclaim from some quarters, not only for Russell’s turn, but also its tackling of police corruption and inherent racism. The movie’s box office failure – the second in a trio of Ron Shelton bombs following Play it to the Bone and preceding Hollywood Homicide that rather did for his career – was even seen as a badge of pride, that it was too smart and uncompromising to garner wider appeal.

Time Out’s Tom Charity suggested Dark Blue “effectively counterpoints history and histrionics, psychological drama and social melodrama”. No, that rather sounds like a jarring clash of styles and content to me, and it is. Spike Lee – Dark Blue utilises regular Lee composer Terence Blanchard – would particularly fall prone to such laboured, sledge-hammer reaches for concrete touchstones, usually as here, by inserted footage or images, as a means to “legitimise” his material (but most often simply emphasising how embarrassing his rambling, semi-coherent tracts are). The Rodney King verdict is only ever a distraction from the bones of the story Dark Blue is telling, lacking the maturity – surprising I know, coming from Ayer – to interweave genre staples with actual brewing racial tensions in a sensitive or germane way.

As a result, you puzzle at movie star Kurt with his movie-star coif, ranging the streets and telling how it is (from his perspective). It’s a great movie performance, Sergeant Eldon Perry embodying an old-school police ethic with racist, “redneck”, intemperate attitudes. It’s not germane to a serious depiction of the LA Riots, though. Likewise, Michael Michele (Homicide: Life on the Street) and Scott Speedman are introduced having a fling, neither knowing the other represents a threat (Speedman’s Bobby Keough is being reluctantly tutored in the ways of corruption by bad seed Perry, and his uncle is much worse seed Commander Van Meter, played by Brendan Gleeson; Michele’s Sergeant Williamson had an affair with her boss Assistant Chief Holland, played by Ving Rhames, five years earlier, a detail that may be wielded to prevent Holland bringing both Perry and Bobby to book).

These are the broadest of melodramatic beats, (as Charity notes), fine on their own – potentially pluses, even – but you can’t expect them to support documentary verisimilitude. This is the more evident with further ridiculous twists. Would Van Meter really be so careless as to employ loose-cannon assassins/ criminals Orhard (Kurupt) and Sidwell (Ray Donovan’s Dash Mihok)? He must realise they’ll land him in it eventually. Does he really not think Perry would check out the address he’s been given (the one he’s sent Perry to, in order to have him assassinated)? As for Perry’s climactic coming-clean speech at his promotion, it’s pure fantasy grandstanding (and Kurt delivers accordingly, but that make it no less phoney).

Speedman and Michele are unable to make their characters particularly convincing, and Rhames is imposingly earnest but too underutilised to carry much weight. Gleeson’s outstanding though, whether he’s chewing out Perry for doing his job or menacing Van Meter in a lift. Also present are Mrs Shelton Lolita Davidovich as Perry’s wife (in a rare admission of chickens coming home to roost, Perry tells her to keep the house and moves out instead) and Jonathan Banks, encroaching now on his Breaking Bad career peak as Deputy Chief Barcomb.

This is Russell’s movie, one of his late-period “star” roles (it was mostly ensembles or supporting turns from here on out), and it gives him reams of juicy material as a psyche fashioned through generations of regressive policing: “That one really fucked me up” he reflects glibly at one point (on his own formative experience, having made Keough shoot an innocent man). Shelton does decent work too, even if sports are more his bag. We were certainly lucky it wasn’t Ayer, with his de rigueur grimdark sensibility, who helmed Dark Blue.